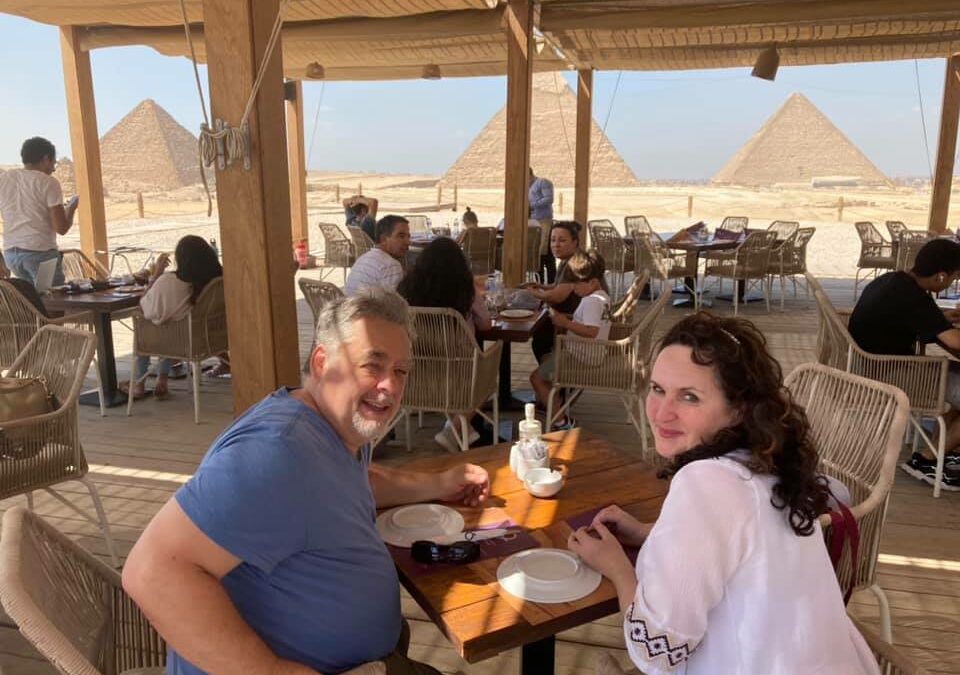 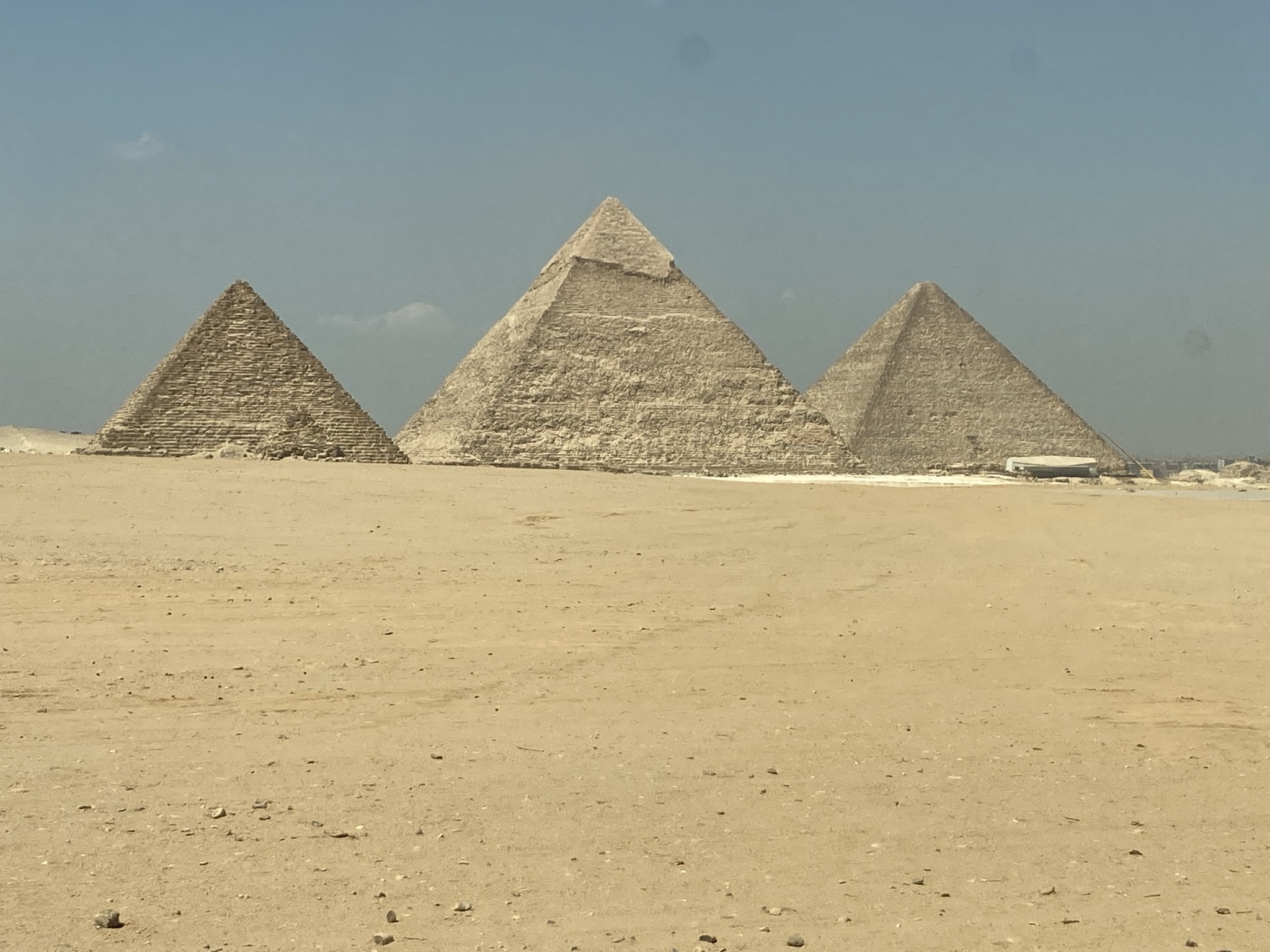 A new experience awaits travelers in 2022 and beyond

The Great Pyramid of Egypt of King Khufu and the pyramids of his son, grandson and queens on the Giza Plateau is perhaps the most famous historic site in the world. Tens of thousands flock here each year to behold that last surviving wonder of the world. In fact, it is also the world’s oldest tourist site, with curious travelers journeying to behold the pyramids – since long before the time of Tutankhamun.

In fact, the Giza plateau is as fascinating for its many historic and royal visitors, as for the ancient kings who built them 4500 years ago. Think of it…  Herodotus, Hadrian, Napoleon, Champollion, Saladin, Winston Churchill. Lady Di… even King Charles and Camilla just a couple of years ago, spent time marveling at the historic site.

But much has changed. Not just from 50 years ago when you could still climb the weathered stones. But from even just one or two years ago… transformation is afoot at Giza.

In September of this year, we met with Dr. Ashraf Mohie Eldin, the director of the Giza Plateau – one of the most prestigious roles in the country. Dr. Eldin is a dynamic and very charming archaeologist who seems to exuberantly fill the formidable shoes left by his predecessor Zahi Hawass. He shared with us all the exciting plans afoot to transform and future-proof the pyramids – for the next millennia of visitors. 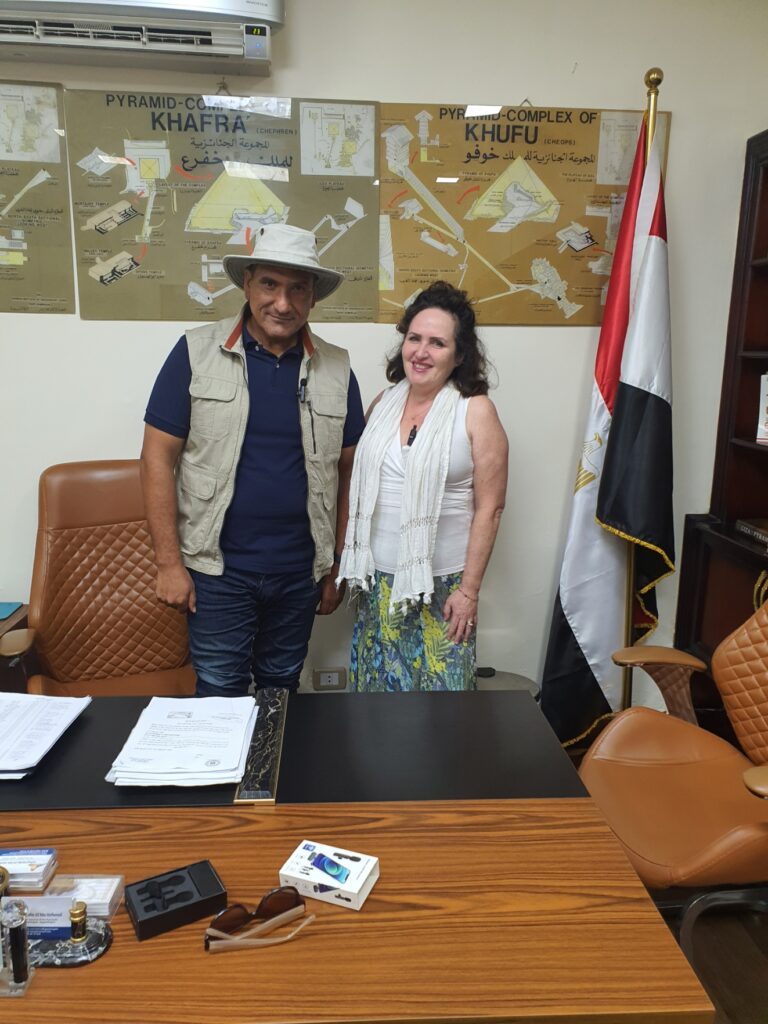 Preserving the Pyramids: Sustainability and a new entrance

As magnificently crafted to last millennia as they are, the pyramids still face many modern threats to their future. The encroaching suburb of Giza, wear and tear of tourist traffic, and fumes and pollution with an enormous parking lot right adjacent to Khufu’s pyramid. According to Eldin, this is all changing.

“I am the keeper. I am the guardian of the pyramids. So, I want to keep and protect those pyramids to live forever,” said Eldin.” So, we will think to have parking outside by Fayum road – all the cars and all the vehicles and buses will be parked there.”

So yes, the new entrance will be via the Fayoum road… and those visiting the sites in coming months and years will enter the site near what is now the panoramic view area – leaving the archaeological area of the pyramids more protected from vehicle fumes, camel drivers, and crowds.  In fact, all the touristic services, including bathrooms, camel rides and a gleaming new visitor centre will be stationed in this area above the pyramids – with a striking view of all three.

The site will be divided into three areas:

There will be school buses, private cars – and electric-run shuttles to transport tourists around the site 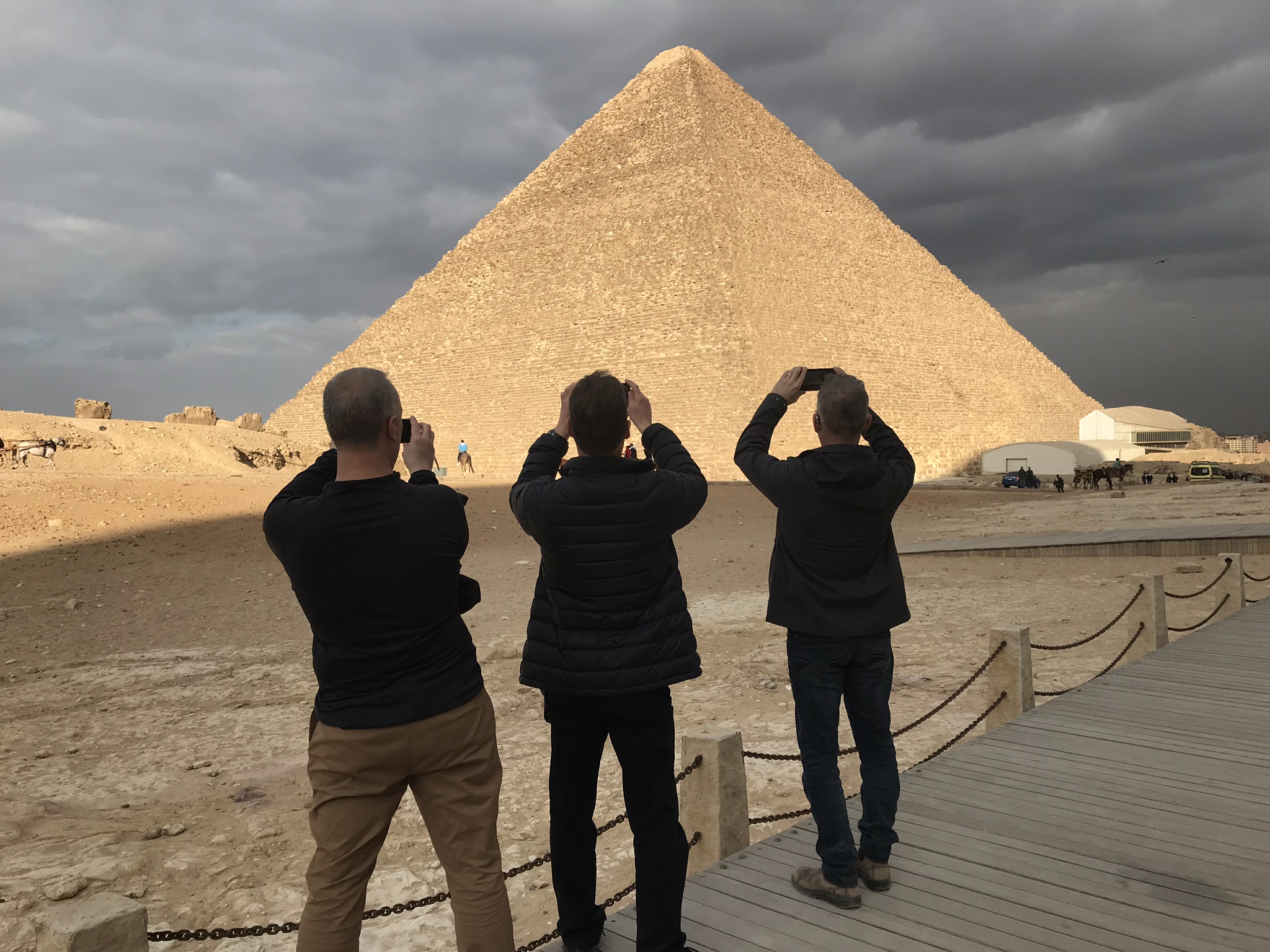 Near the parking lot and ticket office you will soon find a beautiful new visitor center, where, according to Eldin, you’ll be able to watch a seven-minute video on the history of the site, – and the history of pyramid excavations.

The beauty of it is that everything extraneous to the archaeology will be housed in this central entrance area off Fayoum road – including washrooms, stables for camels and horses, tourist services and the vendor areas.

Better site access and ecofriendly, hop on, hop off transportation

The current experience of the pyramids can be a bit awkward. You arrive at Khufu’s Great Pyramid (just beyond parking and tickets) tour that site and the boat museum. Then you have to reboard your tourist bus and drive to Khafre, Menkaure, the Panoramic view – or the Sphinx. This is all being simplified, and better access provided. Once you emerge from the ticket centre, Eldin explained, electric buses will be waiting for you.

“Ahhh… I said… “Kind of like at the Valley of the Kings?” “No,” he replied. “Even more advanced than the Valley of the Kings…These are big buses, and there’s an audio guide because may you need some information about the site. Maybe you’re an individual, and you don’t have a tour guide with you. Plus, it’s all designed as a mobile application with GPS it shows the sights around”

The electric buses at Giza will be hop on and hop off, running between seven different sites on the plateau. For example, if you want to start your tour at the panoramic view, you jump off the bus there…

Not one but four panoramic views!

But be careful when you ask to stop at the panoramic view. Because the Giza Plateau will now have not one but four to enjoy!  “From each panorama, you can see the pyramids from different angles,” says Eldin. “From number one panorama, you can see all nine pyramids. In the others, you see variants – and with the fourth you have a beautiful view of the stretching desert and the sands… with small and large pyramids… so different locations provide different breathtaking views”

Two new restaurants with a view

Prior to 2021, there was nowhere on the Giza Plateau that you could have coffee, a drink – let alone a full meal with a nice view. This all changed in summer 2021 with the emergence of the first restaurant on the plateau. In fact, in August of 2021 we were two of the first to enjoy a beautiful lunch here, enjoying one of the most spectacular panoramic views. The new restaurant is called Nine Pyramids View. Its beautifully situated on a crest above the Menkaure pyramid with both outdoor patio and indoor options. Fresh delicious Egyptian food is served in a peaceful upscale environment. A nice touch too is the open-air wood ovens where ladies prepare fresh, delicious Baladi bread,

A restaurant at the pyramids? You would think this would have been in place years ago, It took a smart entrepreneur in recent years to rent the land and build Nine Pyramids View in such a choice location.

In September 2022, a second restaurant opened on the plateau called “Khufu Centre” It offers more fine dining experiences and is located lower on the plateau very close to both Khufu and Khafre pyramids, hence the name. The views from the terrace are, of course, of these two great pyramids, the largest and most magnificent on the plateau and in the world. The building itself is not new – it’s from the 60s (as Eldin told us) but has been repurposed and transformed into Khufu Centre this lovely new dining establishment. 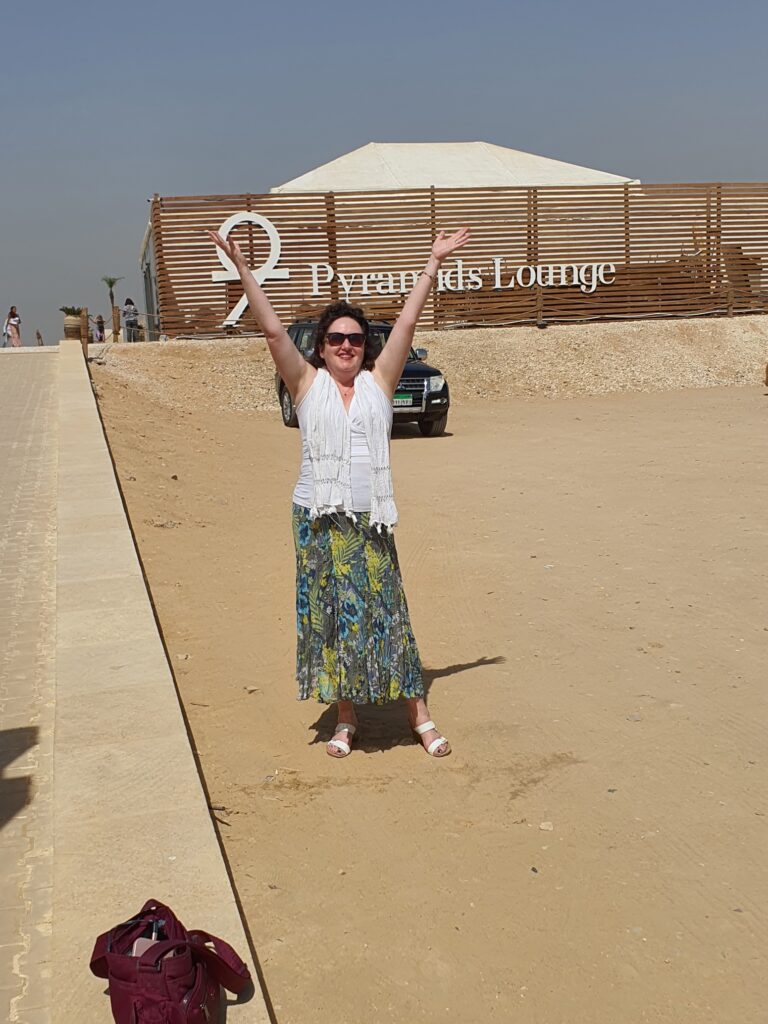 So, a quick rundown of changes at the Giza plateau:

Stay tuned for more on our interview with Dr. Ashraf Mohie Eldin… on archaeology and new discoveries at Giza.

Would you love to take a small group, enriched tour to Egypt – and explore the new Giza Plateau? 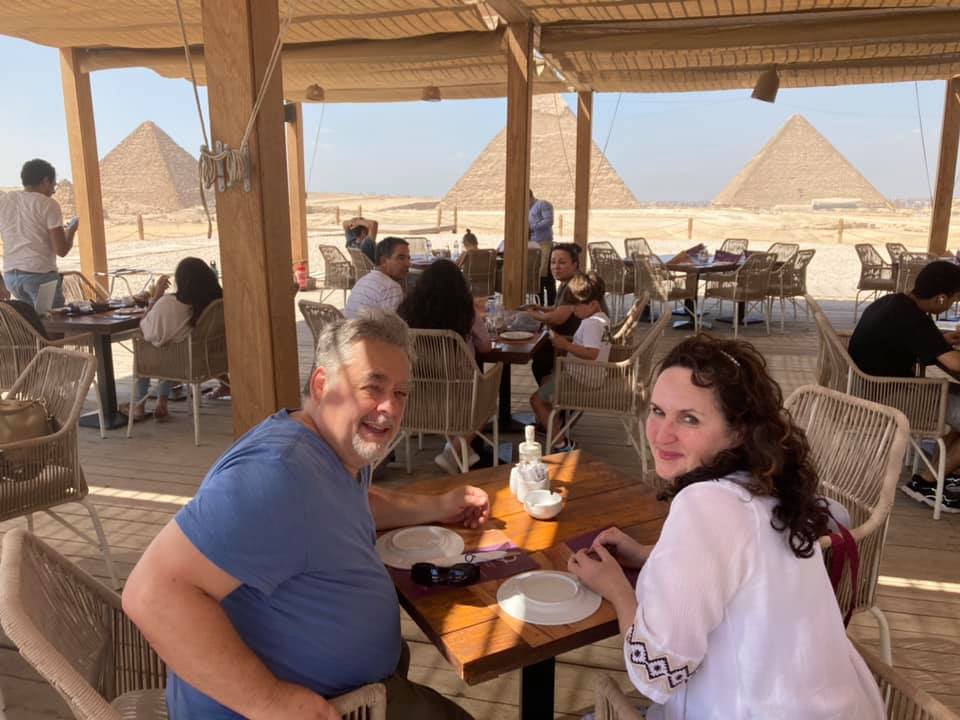