Elizabeth II and Ancient Egypt’s Kings: how they compare

The death of 96-year-old Queen Elizabeth has plunged Great Britain and most of the world into a long period of mourning.

This extraordinary Queen, with us throughout our lifetimes, has withstood wars, scandals, deaths – even our recent plague – with uncommon grace and character. She has been a comfort and inspiration to so many and may indeed go down in history as the greatest Queen of all.

When it comes to Egypt, I wish I could show you pictures of the Queen touring the pyramids, riding a camel – or shaking hand with Sisi, Mubarek, Sadat, Nasser – even King Farouk–  in Egypt.

But the Queen never traveled to Egypt. That was not part of her duty, as much as she may have loved to visit. The closest she came was seeing the treasures of Tutankhamun at the British Museum 50 years ago in 1972. 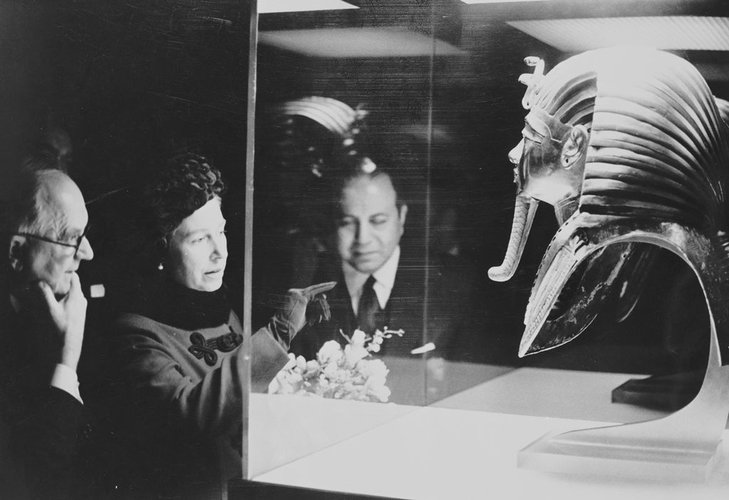 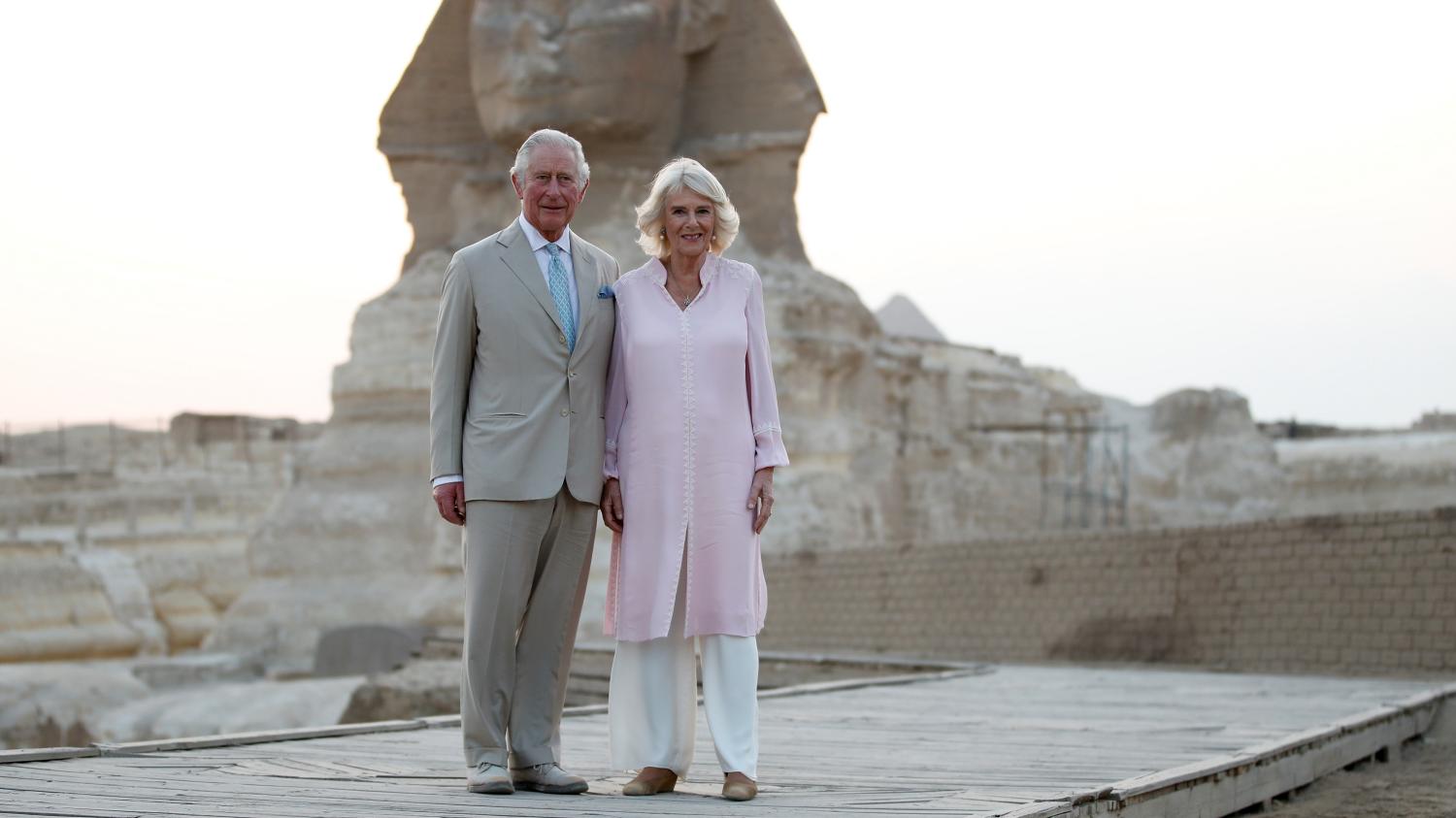 Charles III and Camilla visit the Sphinx in Egypt on their tour in 2021 Image: egypttoday.com

King Charles III and his Queen consort Camilla visited Egypt twice, most recently in 2021. They were escorted by Sisi, dined at the sleek new 9 Pyramids restaurant at the Giza plateau. While Charles met with state and religious leaders, Camilla donned a hijab and attended a sebou — a traditional celebration usually held on the seventh day after a child’s birth that dates back to Pharaonic times.

Though never in Egypt, and ruling long after the age of the Pharaohs, we can consider Queen Elizabeth’s remarkable rule, in light of the legacies of some of the greatest Kings and Queens of Egypt. 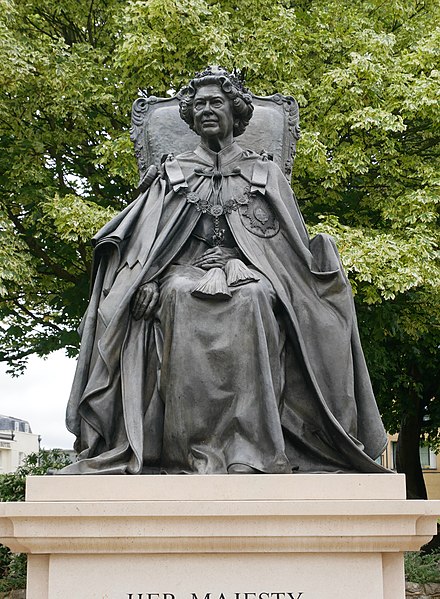 What we are feeling today may be akin to what the Ancient Egyptians felt in 1213 BCE when they lost King Ramses after an incredible 66 years of rule. As with Elizabeth, the people had only known one king for several generations. Ramses, in fact, outlived 12 of his roughly 50 sons (and he had 50 daughters). It was Merenptah, 13th son, who finally succeeded him.

In terms of long rule and impact on many generations, there is a parallel with our Queen Elizabeth II. But there the comparisons pretty much end.

Ramses came from a family of bold warriors; he was a soldier king who led his troops into battle, both north, south and east of the Egyptian border, and depicted his military victories with unabashed pride on many of his temple walls. His battle with the Hittites may well have been a historic “draw”, with losses on both sides, but as a brilliant PR strategist, he spins the story as a complete Egyptian victory, with himself as a central hero. A promoter, an extrovert, you could say braggart, Ramses appropriated whichever statues served his end from past kings,Ramses was all about Ramses – and his Egypt — securing his legacy as the greatest king of the greatest nation. A larger than life, unforgettable leader nevertheless from whom we have some of the greatest monuments and statuary of antiquity.

Elizabeth of course, though she served in World War II, was the farthest thing from a warrior. She was self-effacing, modest, and fully devoted to doing her duty: supporting humanitarian causes and helping her people – never taking sides or promoting herself or her family. Diverting family scandals was one of the most difficult aspects of her life and rule for such a private person.

The only other comparison between Ramses II and Queen Elizabeth II besides longevity and greatness of impact is this: Ramses also brokered the world’s first peace treaty with the Hittites in the mid 13th century BCE, an act that would have no doubt have solicited a hearty nod of approval by our Queen. 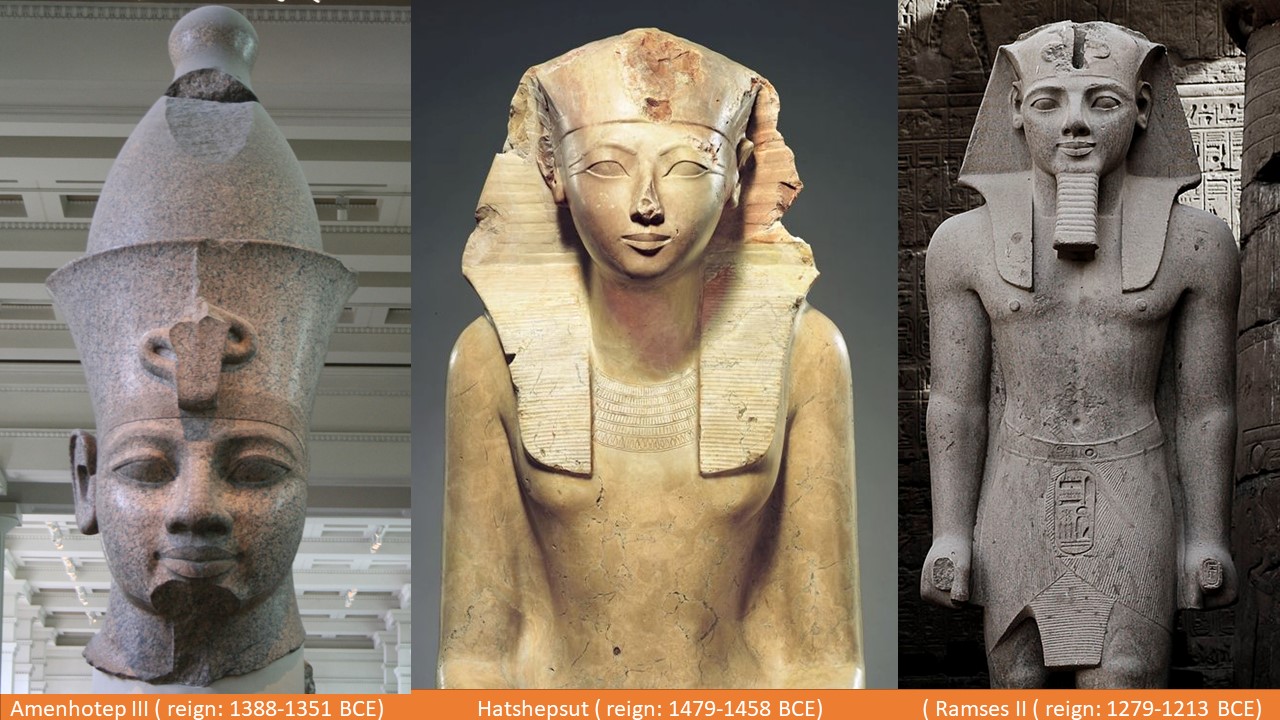 Famous statues of Amenhotep III, Hatsheput and Ramses the Great All images: Wikipedia

He was the golden king – the Pharaoh who ruled during the apex of Egypt’s power and prosperity. No king created greater or more abundant statuary (some appropriated by Ramses) – or iconic funerary monuments, with his mortuary temple of Kom el Hettan being the largest temple of all, built in one go for one god.

Unlike Thutmosis III or Ramses the Great, Amenhotep, however, was no soldier king. He is remembered in history as the great diplomat; the father of the nation who brokered powerful relationships and trade agreements with so many important leaders across the Mediterranean and near east.

With his trusted consort Queen Tiye at his side (like Elizabeth’s trusted Phillip), he used diplomacy to reach Egypt’s foreign policy objectives. From the Amarna letters – cuneiform correspondence between Amenhotep and Kings of the near east – we can see how deeply he was revered and respected by leaders throughout the ancient world: the Mittani, Babylonians, Assyrians, and the Hatti.

Elizabeth the II shares this in common – stellar diplomacy and a desire to secure and support peaceful relations with world leaders.

There is also a parallel between Amenhotep III and Queen Elizabeth II when it comes to “dazzling jubilees”: festivals celebrating many years on the throne, which in ancient Egypt were called “Heb Seds”. Both the courts behind Elizabeth II and Amenhotep III really knew how to throw a big party to celebrate their venerable monarchs.

And when it comes to rebel offspring, both Monarchs could relate. Amenhotep III had his revolutionary son Akhenaten who would abandon the cult of Amun and Egypt’s capital (Waset -Thebes) for Amarna (Akhetaten), while Elizabeth II’s grandson Harry, of course, renounced his place in the monarchy and left for a life in California. 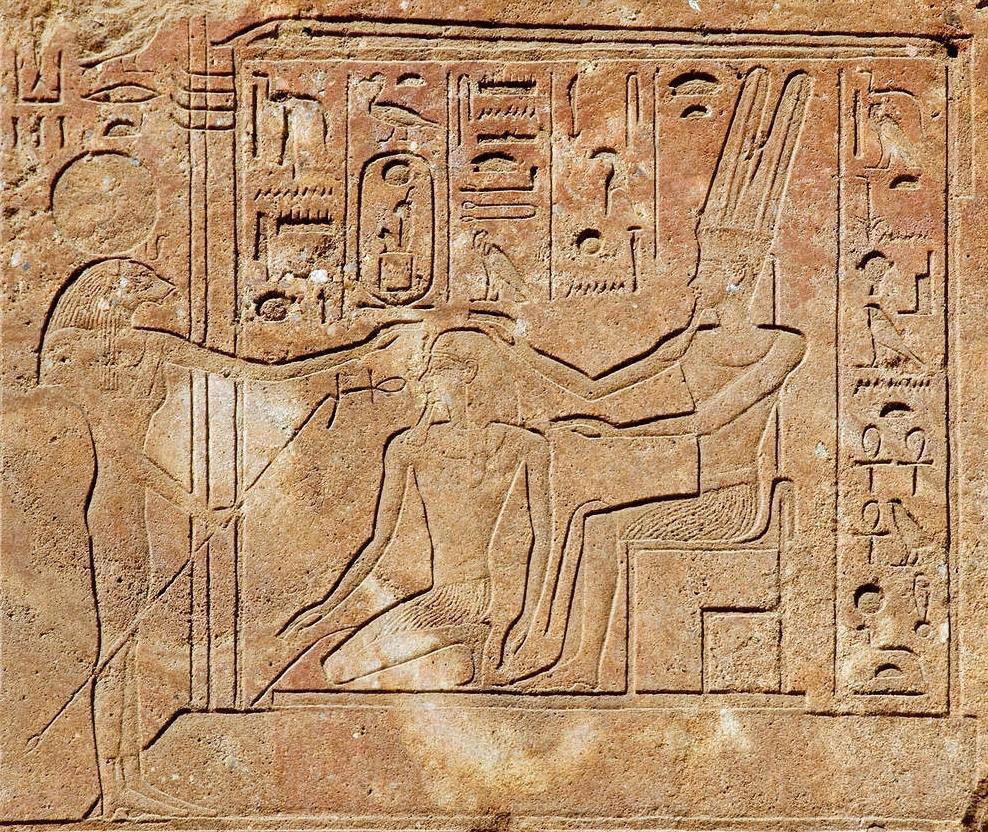 Hatshepsut’s Coronation – a relief from her Red Chapel of Amun Karnak – with Amun and God Uret Hekau Image: baslibrary.org

Perhaps the ancient Egyptian ruler that most exemplifies the spirit of Elizabeth II is Queen Hatshepsut. This extraordinary woman ruled Egypt for about 20 years during the 15th century BCE, adopting the full panoply of kingship.

Where Hatshepsut and Elizabeth most compare is in their devout service to their respective gods – and their love of their fathers.  For Queen Elizabeth, her oath to serve god and her unwavering devotion to the Anglican church characterizes her reign and her achievements. When it comes to Hatshepsut, a noble born lady appointed “God’s wife of Amun” at a young age, serving her father, the great god, was her first consideration in all she did. Every monument, trade mission and each of the four pink limestone obelisks she erected were in the name of her father Amun – from whom she believed she was born.

All works for her father: the god Amun

Hatshepsut was widowed at a young age, and together with the support of her inner court, and a special friend/advisor/lover? Named Senenmut, she was able to achieve great things: Conduct a great sea journey to Punt for ebony, ivory and incense trees. Keep the country strong and at peace. And erect some of Egypt’s finest monuments, temples and obelisks, including her beautiful terraced mortuary temple at Deir el Bahri. As is the case with Queen Elizabeth, all her works were in service to her god and country.

An ancient Egyptian funeral procession depicted in the Book of the Dead – from the funerary papyrus of Ani, Image: Wikipedia

As in Ancient Egypt, 2022 through 2023 will be a year of special rituals, mourning the deceased ruler, and time-honored rites before Charles III assumes the crown in a grand coronation ceremony. In Ancient Egypt, the heir to the throne would go unshaven for a long period. The death of a pharaoh was followed by a 70-day period of mourning in which normal life came to an abrupt halt. During that period no one was allowed to drink wine, eat meat, bath, conduct sacrifices or have sex. People were expected to weep openly in the streets to express their sorrow.

In some ways, many things have remained the same after four millennia of history. We still mourn our great rulers, with great pomp and circumstance for long periods of time. Hopefully we will continue to support monarchies for the comfort they bring, the service to humanity they provide, and the unique connection they sustain to our recent and ancient past.

In the words of the Ancient Egyptians: “May Queen Elizabeth II have bread, beer, oxen, birds, alabaster, clothing, and every good and pure thing upon which a god lives.”