Immersive Tut in Toronto: A cinematic trip to the Afterlife 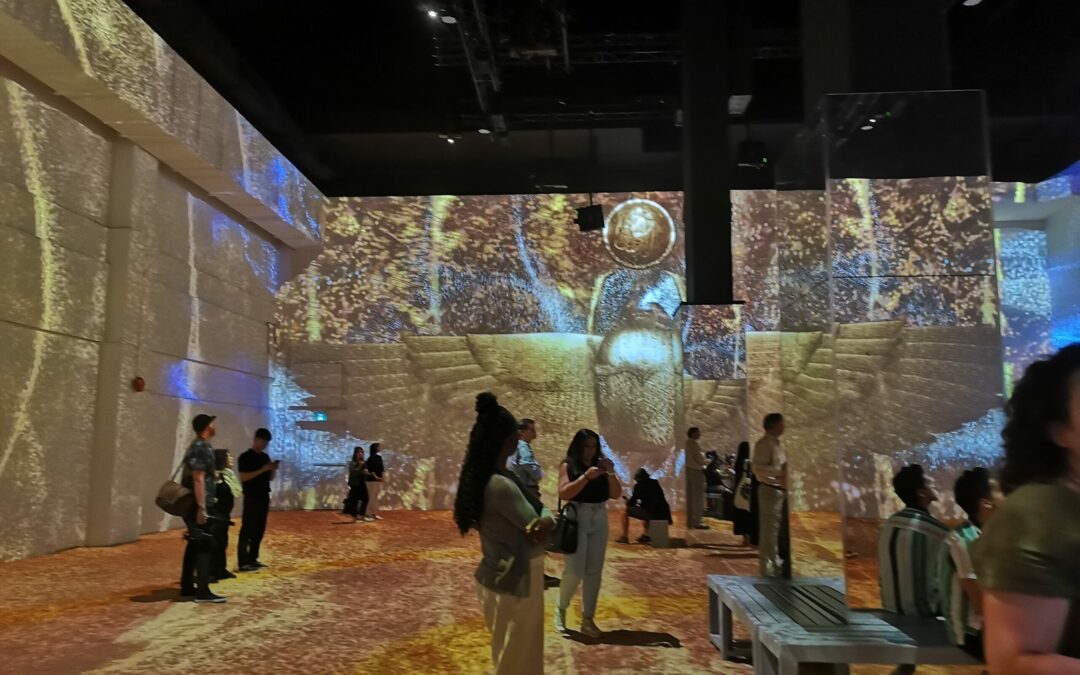 Immersive Tut in Toronto: A cinematic trip to the Afterlife

No Tut, no golden mask  – but a fun, evocative ride to the Egyptian afterlife. 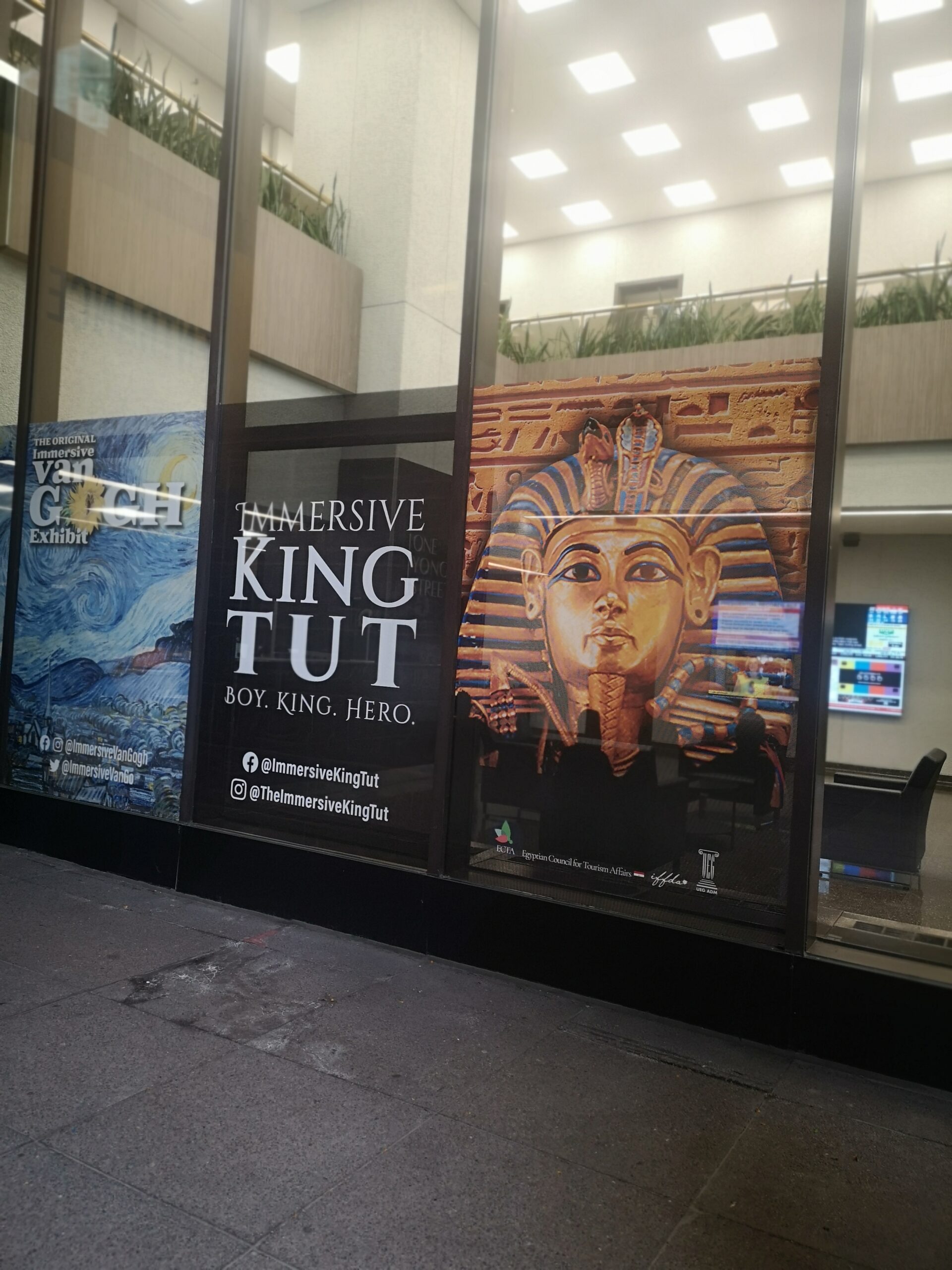 The show runs in Toronto at Lighthouse Artspace (1 Yonge Street) from August 10 to October 30 – and is also slated to come to a handful of US cities from Cleveland and Chicago through New York, LA and Houston. Purchase tickets here: https://immersive-kingtut.com/toronto/

Lighthouse Artspace is known for its other shows such as Immersive Frida Kahlo or Immersive Van Gogh. Immersive Tut, however, is a completely different show. Instead of engulfing you inside famous paintings of renowned artists, it takes you on a journey through the afterlife, alongside famous King Tut.

Immersive Tut could not have come at a better time, as this year marks the 100th anniversary of the discovery of Tutankhamun’s tomb and treasures by Howard Carter. But don’t expect to meet Carter  – or experience Tut’s treasures in this experience

As Richard Ouzounion, creative consultant for Immersive Tut, explained, the show is not focused on the mummy or precious artifacts, but on ancient Egyptian religion and spirituality. The experience itself – which is cinematic in nature – surrounds the book of the Amduat which recounts the twelve-hour journey that the soul of the dead king undertakes to reach the afterlife and ensure the welfare of Egypt.

There is no virtual reality headgear, Not too much moving from room to room or touching objects, It is a largely cinematic experience. The main show features artistic projections on the wall of one large room, striking images that ebb, flow, appear and fade, stirring music and a powerful narration by a theatrical script around the journey to the afterlife. If you have ever seen a Sound and Light show in Egypt – it is a bit closer to that.

We also have the opportunity to interview Richard Ouzounion after the exhibition. If you want to know more about the show, how it was originated and the objectives and ideas behind it, watch the interview we made in our youtube channel: https://youtu.be/O_whHR22n9s. (There are also some exclusive sneak peeks of the show that you cannot miss!)

What is the “Book of the Amduat” anyway?

The book of the Amduat is one of the most important funerary texts of the New Kingdom (1550-1069) in Ancient Egypt. Among many other funerary texts, one small passage from this is found written inside of King Tut’s tomb. This book narrates the journey that the solar god Re makes throughout the underworld during 12 hours of the night from sunset (death), to sunrise (rebirth). It was believed every king took this journey alongside Re after death. The rebirth of both the king and the sun god is essential to the continuity of Egypt itself. 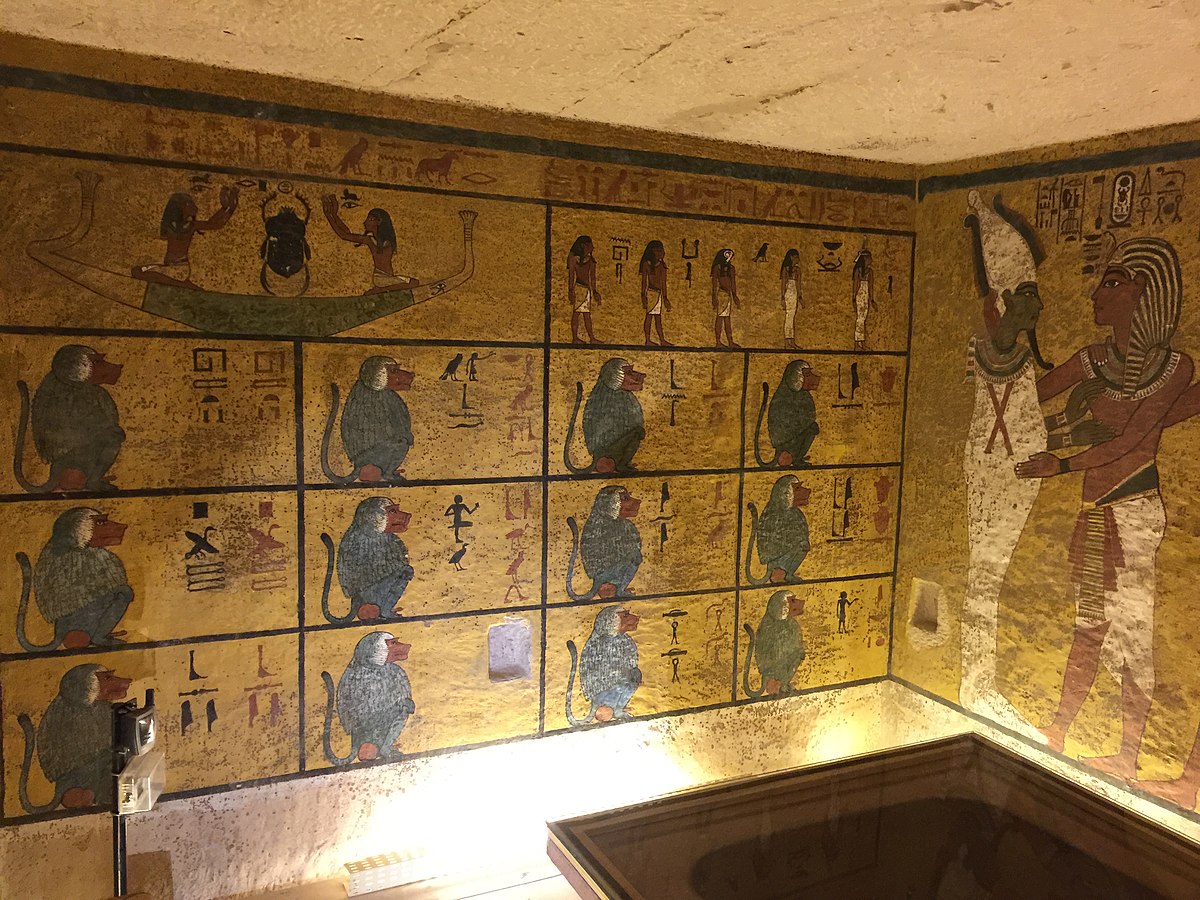 Editor from Mars. Inside Pharaoh Tutankhamun´s tomb. Recovered from https://en.wikipedia.org/wiki/File:Inside_Pharaoh_Tutankhamun%27s_tomb,_18th_dynasty.jpg

Amduat: Not a big part of Tut’s Tomb

The fact that they chose this very confusing funerary book as central to the Immersive Tut experience surprised us. It is not an important part of Tut’s tomb. Yes, a part of this book is indeed represented on one of the four painted burial chamber walls, but only the first hour, (see image above).  What’s more, the show’s creative visuals more closely reflect the book of the Amduat from the tomb of King Thutmose III (100 years older than Tutankhamun) – the only tomb where this afterlife book is complete on the walls. 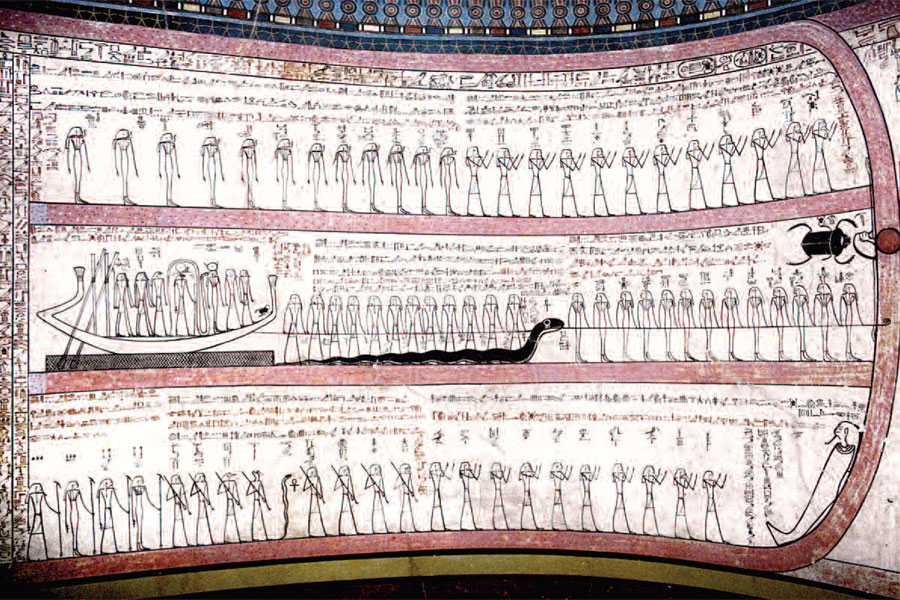 Penn Museum. The book of the Amduat. Recovered from https://www.penn.museum/sites/expedition/the-rebirth-of-the-sun/

In fact, the show projects lots of images and artifacts unrelated to Tut’s tomb – from the time of other kings and queens. Are they Egyptian? Yes. Beautiful and magical? Certainly. But the fact that they all fall under the banner of “Tutankhamun” is a tad misleading; the spectator may leave the show with misleading and incorrect information.

Upon entering the exhibition, you are invited to play an interactive game where you can create different hybrid figures through the movement of your own body. Here is the link to a video on our YouTube Channel of Laura playing this fun game: https://www.youtube.com/shorts/LVibGiS3COQ. 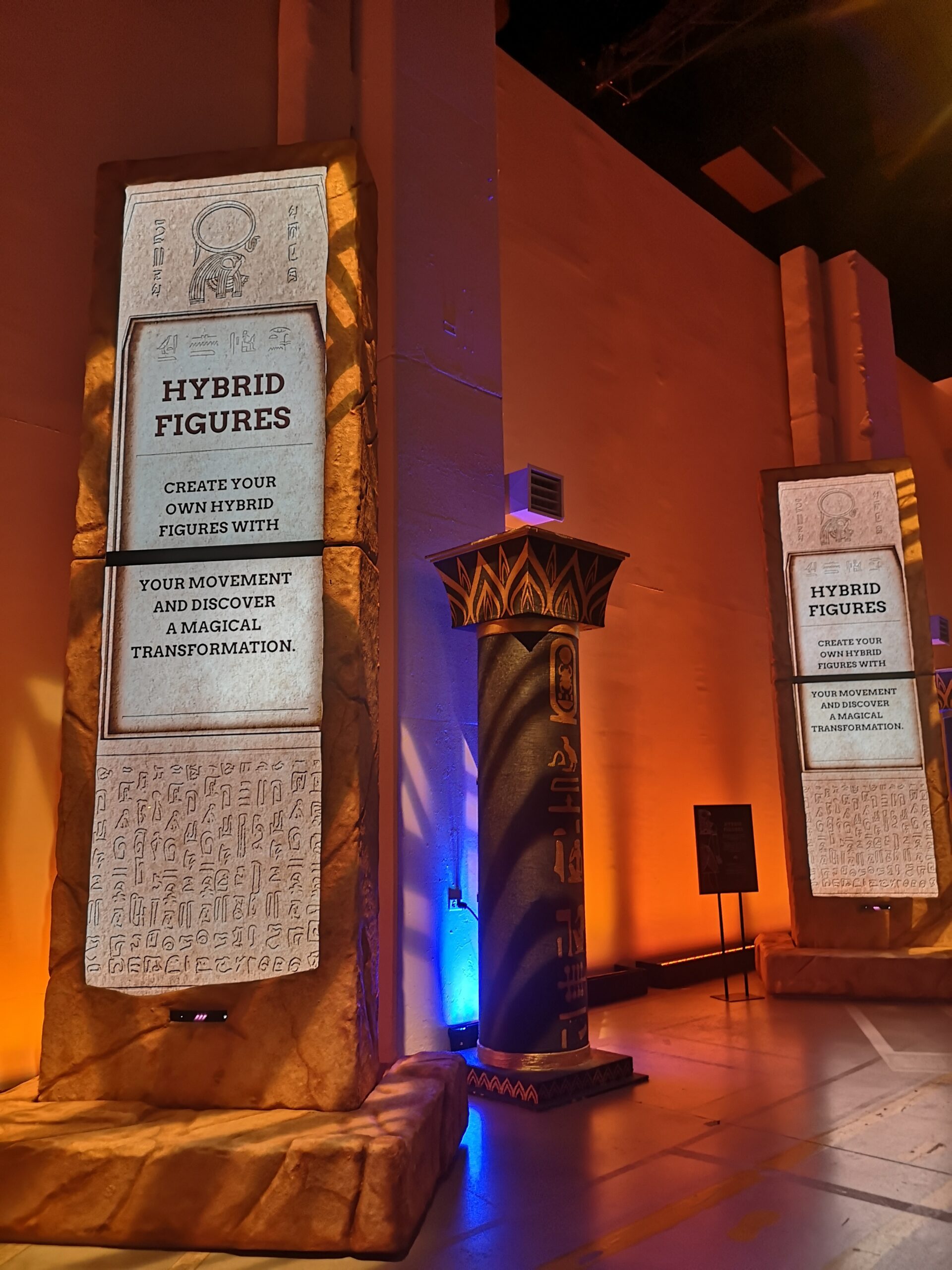 The inspiration for this game probably came from the gods and goddesses of Ancient Egypt that are often represented in a hybrid form, usually with the head of an animal and a human body. However, as you can see in the video, here everything is transformed (your legs, torso, arms, head…etc), and not with animal and human parts, but with different statues and reliefs from Ancient Egypt. A bit abstract  – but fun for the kids. 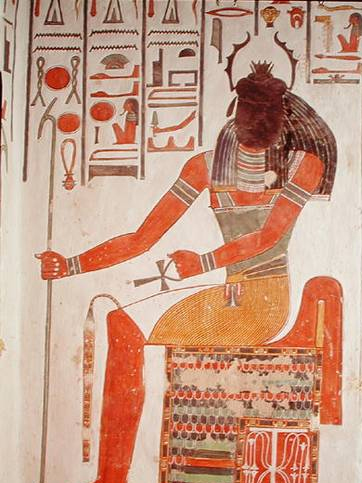 The second room provides more in-depth display panels on Tut, the discovery, and the tomb. There is a helpful timeline – and replica paintings from Tut’s tomb with information on the young king’s life.

News Artnet. Wall painting from the tomb of King Tutankhamun. Recovered from https://news.artnet.com/art-world/egypt-confirms-king-tuts-tomb-likely-holds-secret-chambers-336268 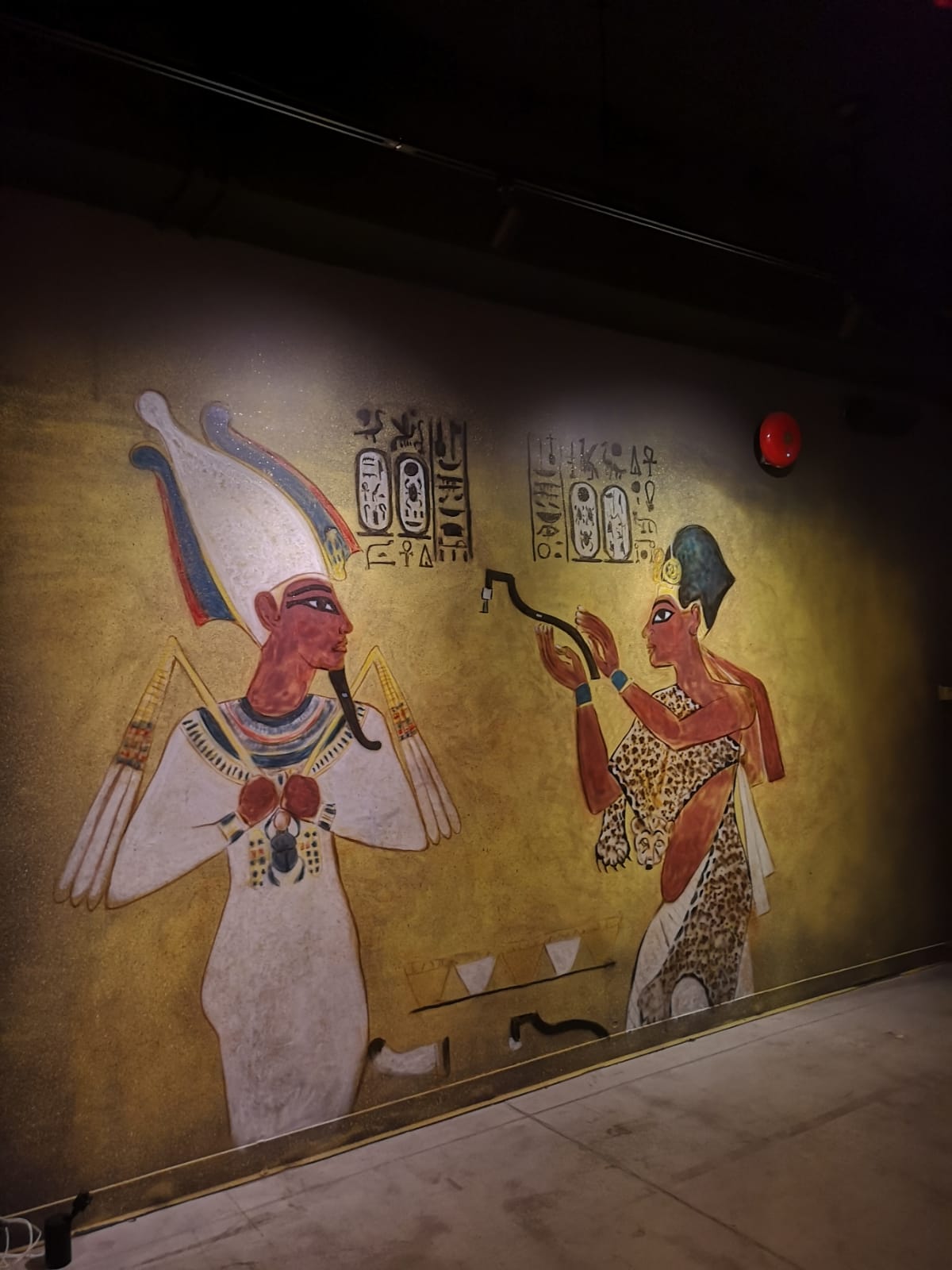 Virginia Martos Armenteros. Recreation of one of the wall paintings from the tomb of King Tutankhamun at Immersive Tut.

The exhibit does give you an opportunity to come face to face with Tut himself.  There is an excellent replica, (granted by the Egyptian government) of both the second coffin (with its unique rishi design) and the mummy of Tutankhamun itself. Interesting fact: neither the mummy nor the mask of Tutankhamun will ever leave Egypt again. So replicas will be the way of the future to engage the public in Egyptian history for world museums. 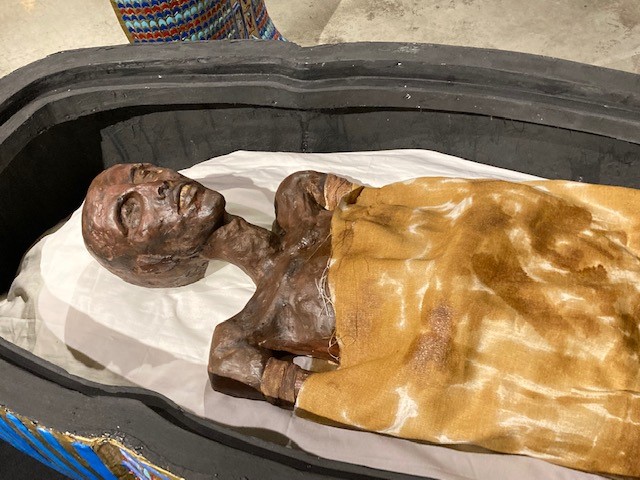 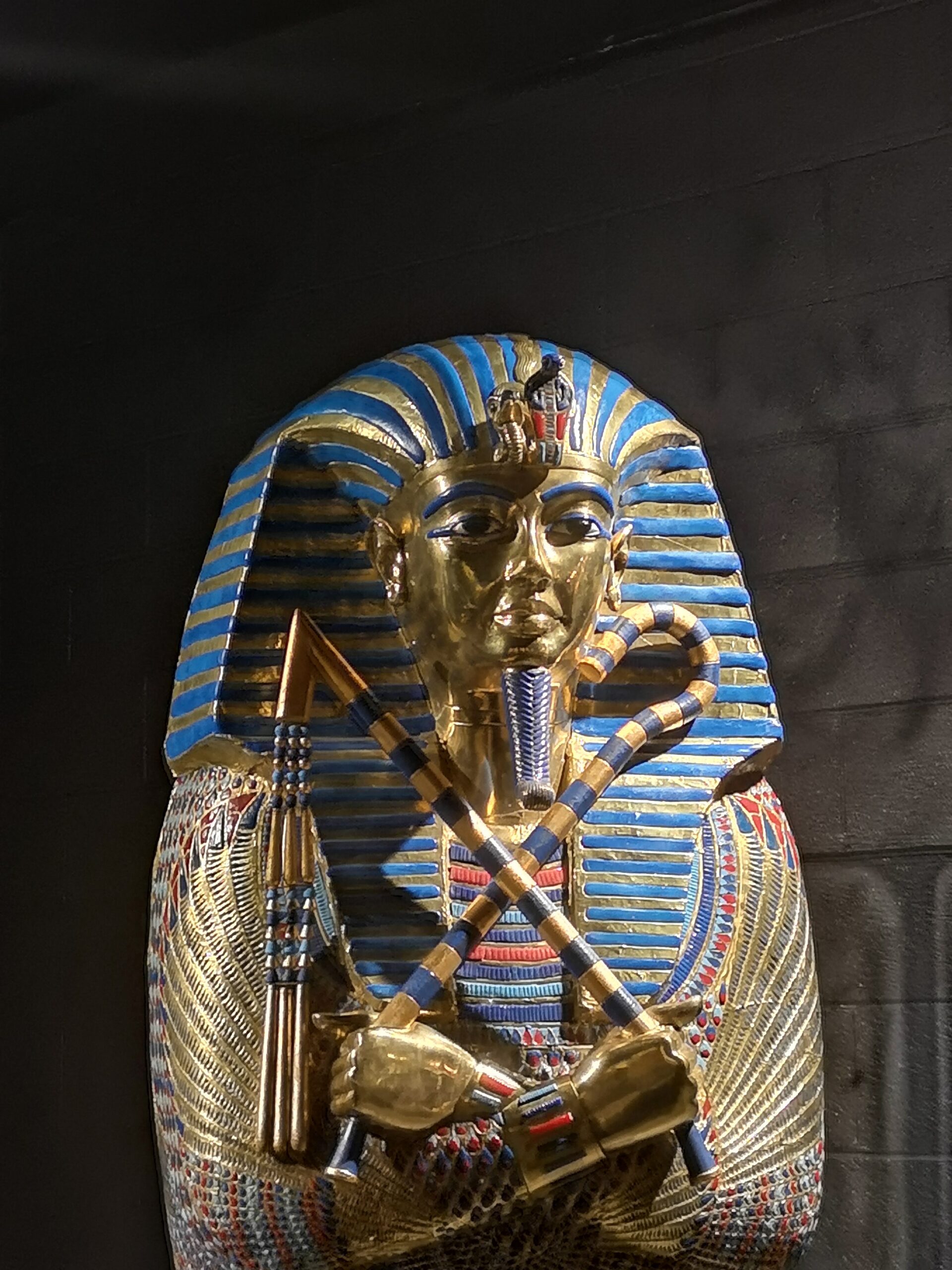 The cinematic experience itself

Finally, the moment was at hand: the audiovisual immersive spectacle. Here is what it’s like: Music begins, images appear projected on the walls and floor- and you are suddenly within a sacred sanctuary. Egyptian objects from all periods of Egyptian history come into view on the walls. 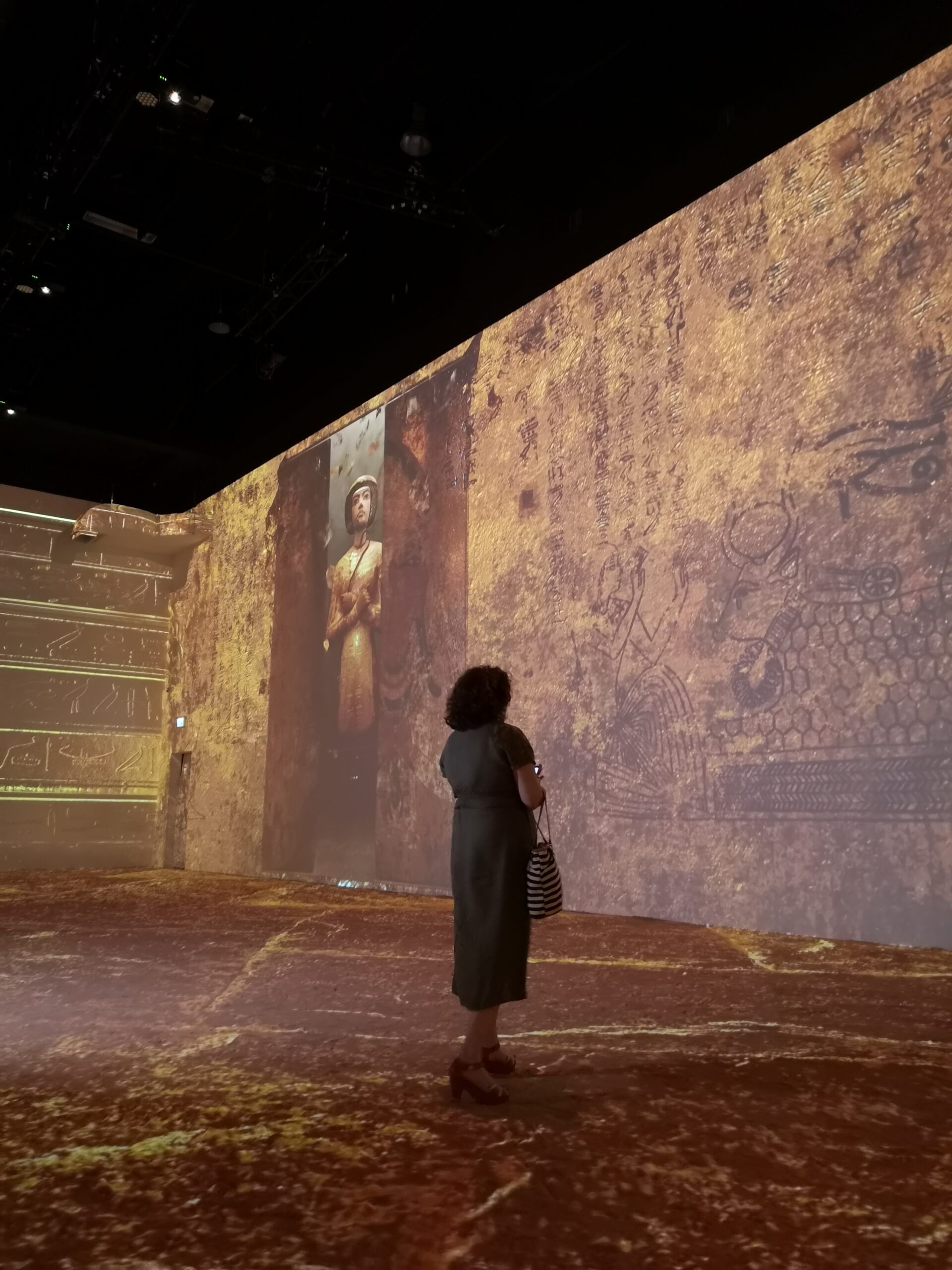 As soon as we entered, we were surprised that what we were stepping on was not a common floor, but sand (a clever trick with bulky carpets). This small detail lends powerfully to the atmosphere and transports you to the desert.

Then, the book of the Amduat of Thutmose III appears on the walls A theatrical voice begins to narrate how Tutankhamun has passed away and the future of Egypt depends on the success of his journey to the afterlife.

For the next thirty minutes, you accompany Tutankhamun on his journey with Re to the afterlife. Everything is beautiful and very eye-catching (the work of an inspired creative team in Mexico), a perfect experience on a cinematic level, even if more abstract and conceptual, than a historic-based learning experience. And really …. not very specific to Tut and his special tomb. 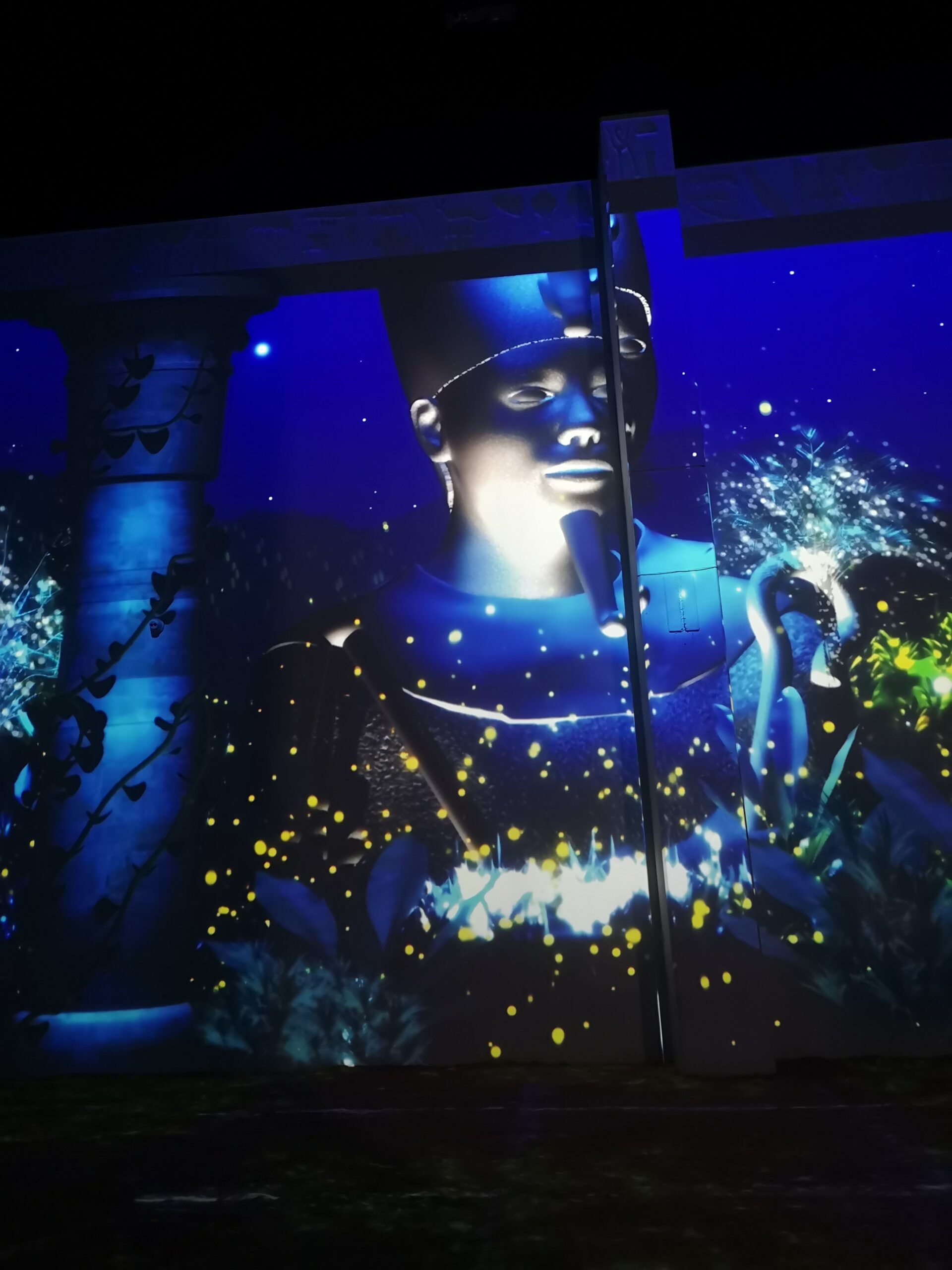 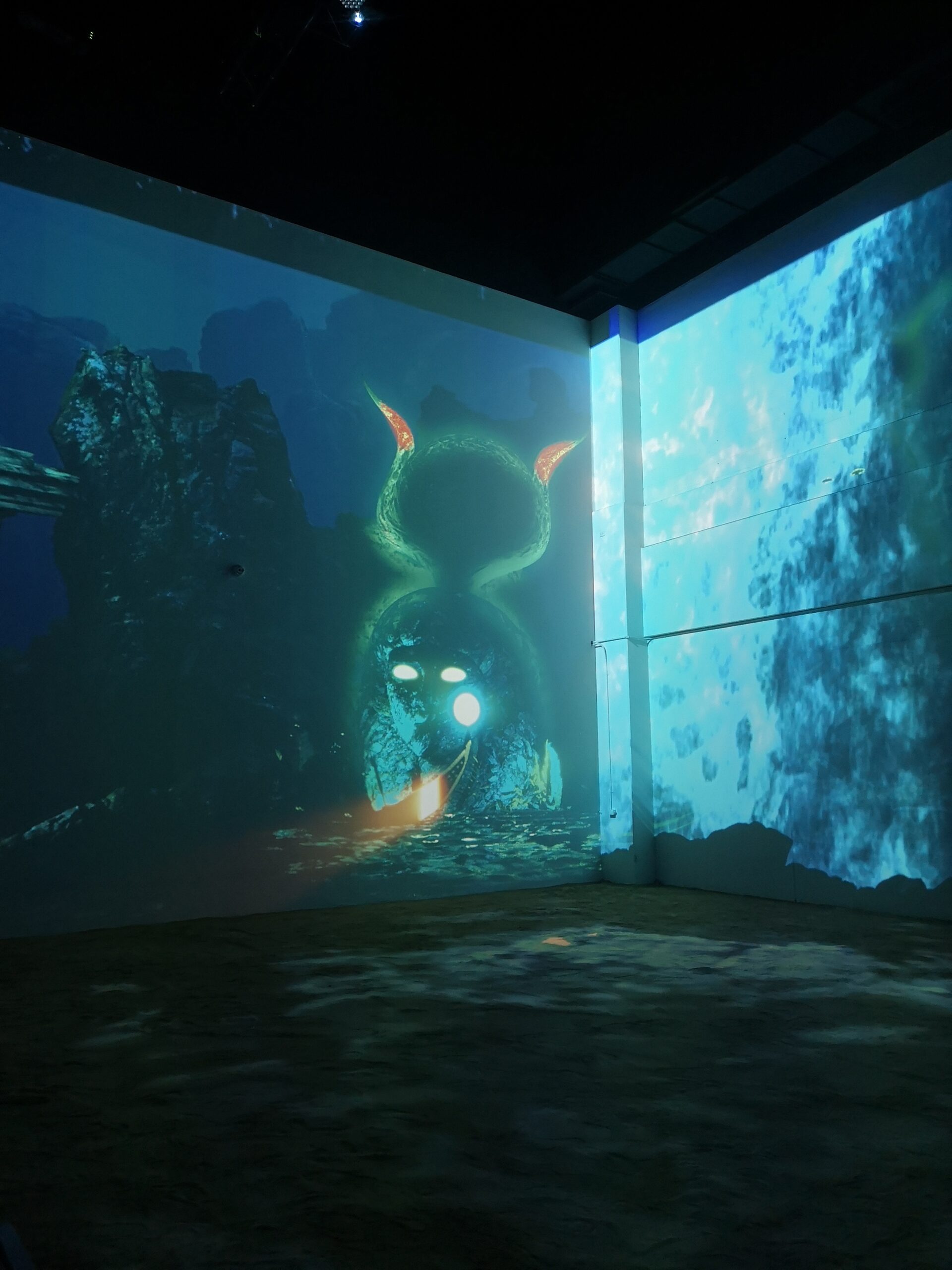 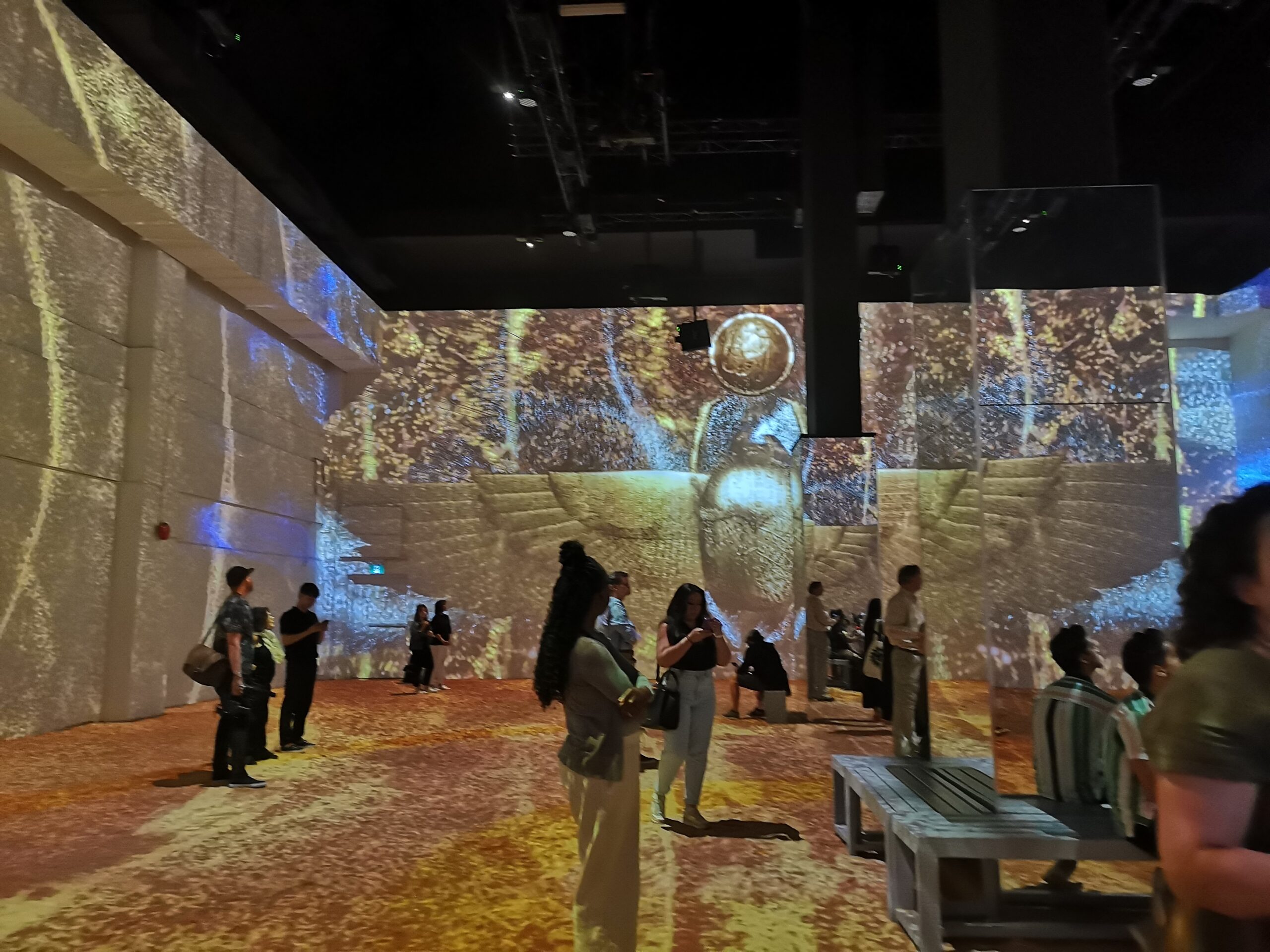 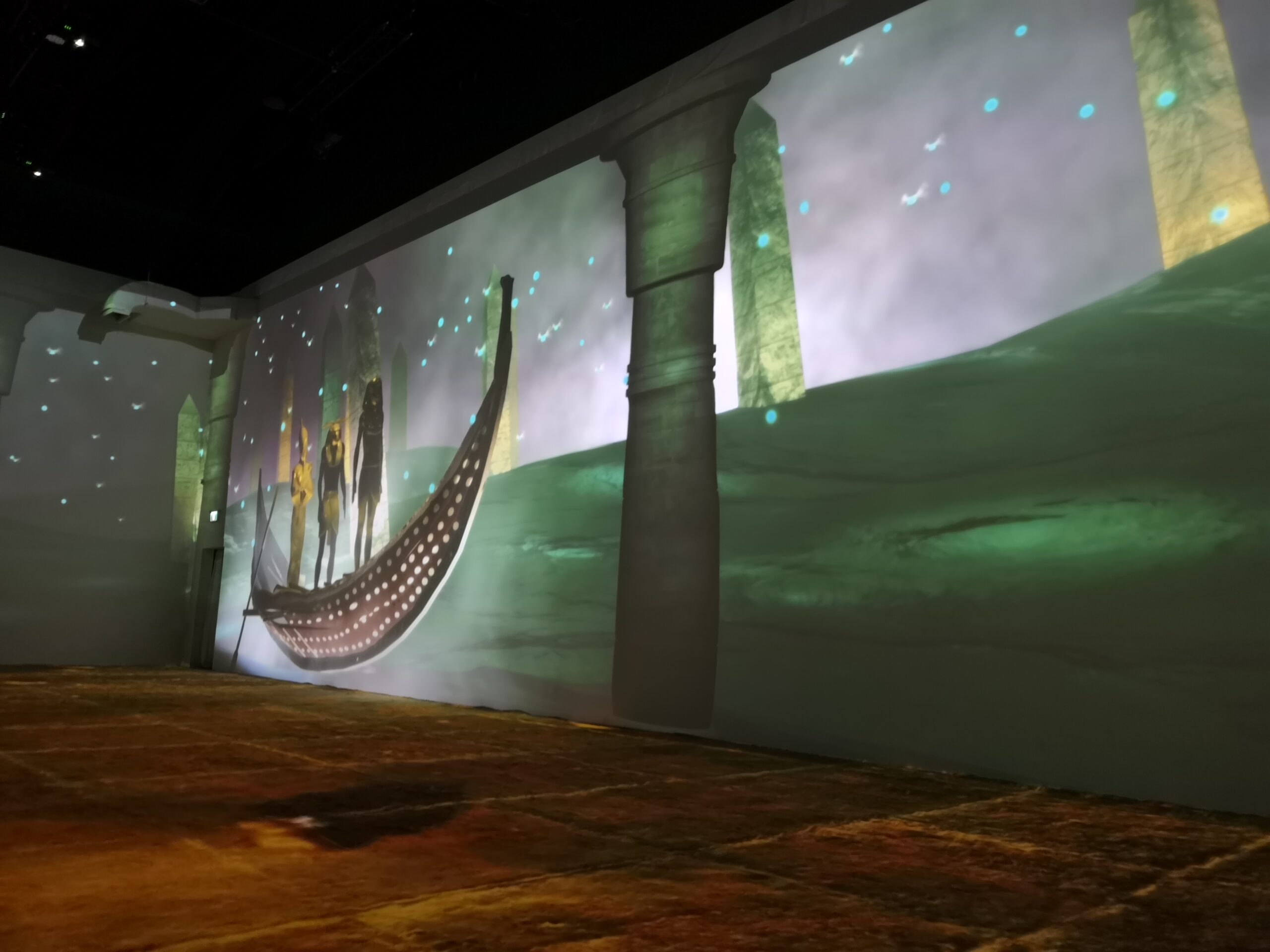 The dramatic narration is particularly good – and lends dramatic appeal. Without it, the experience would be far less powerful. The aim is to inspire and inform the visitor about Ancient Egypt’s afterlife beliefs. Now, the question is: does it work?

Immersive Tut is an immersive experience that has all the dazzling effects, visuals, and sounds that enlivened other shows Lighthouse Artspace like Van Gogh or Frida Kahlo. It is visually inspiring. uplifting – and otherworldly.

The show, however, might have benefited from more Egyptology guidance and oversight. The whirlwind journey through these loosely-accurate, artistically interpreted hours of the night while cosmic, serve to generate awe, rather than truly deepen understanding.

Also, more of a direct connection to the objects, events and history around Tutankhamun, and the discovery of the tomb by Howard Carter… would have been nice. Especially considering the show name. 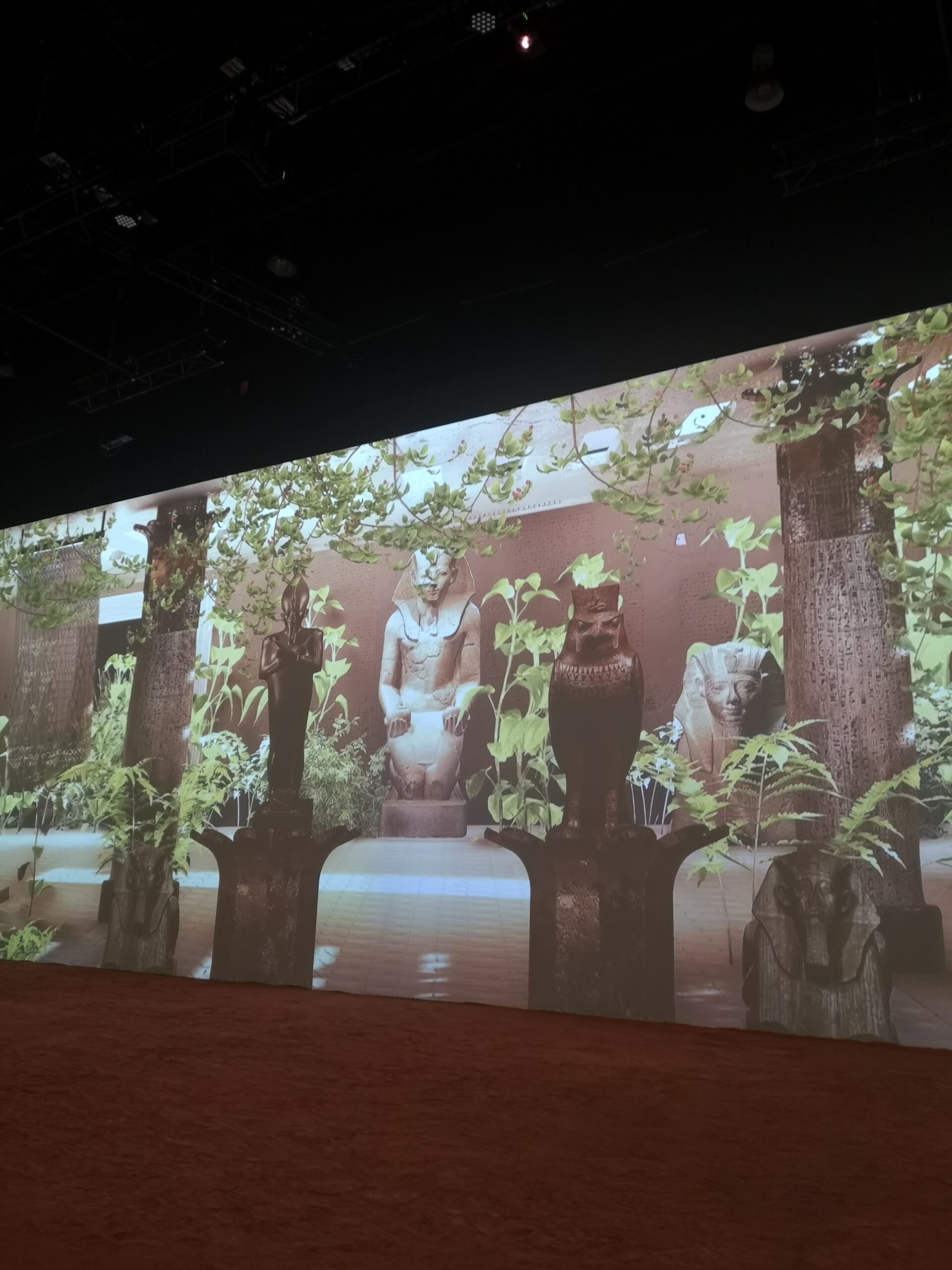 The reality is this. There are lots of restrictions and hefty costs around copyrights, travelling objects and replicas. Far easier to create a fantastic world of the afterlife than to attain the legal ok to reproduce Tut’s tomb and an accurate and approved experience of his treasures. A team of artists interpreting the journey was certainly a more feasible choice for the Lighthouse folks.

Ouzounion himself confirmed how this show does not want to focus on the treasures or tomb of Tutankhamun, but to shine a light on the spirituality and religion of Ancient Egypt. Certainly, that journey was enthralling – if not accurately – evoked. 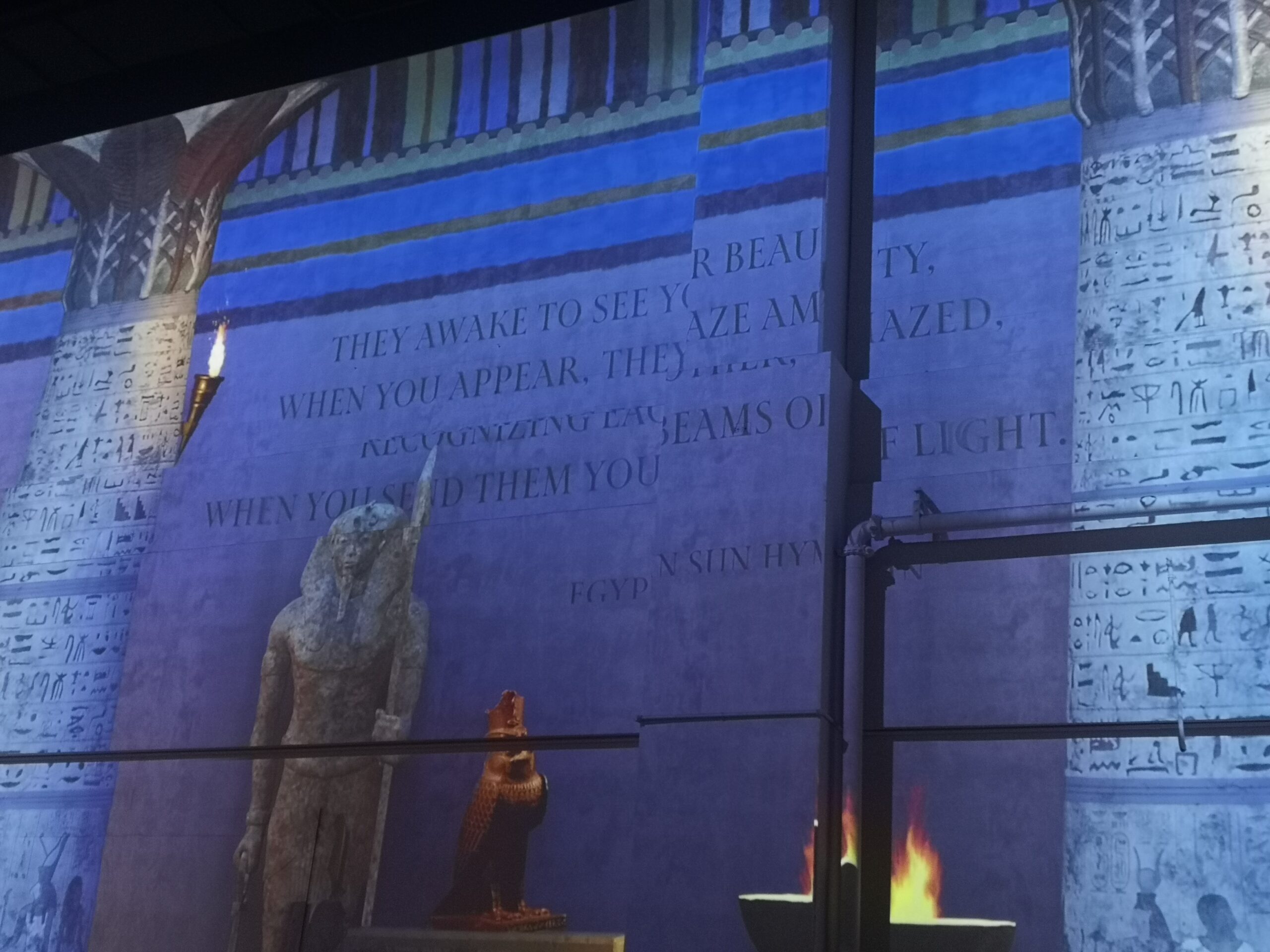 All that said, there is no doubt the team faithfully incorporated numerous images of real Ancient Egyptian statues, paintings, and monuments. Most of them appear vividly in the presentation – but often the context does not make much sense. For example, at the very end, a sphinx avenue appears – inside a temple. (when these avenues generally line the road to the temple and are never inside. Kind of like a highway in a department store, to use a modern example. And why do we end with the pyramids – built 1000 years before Tut lived? 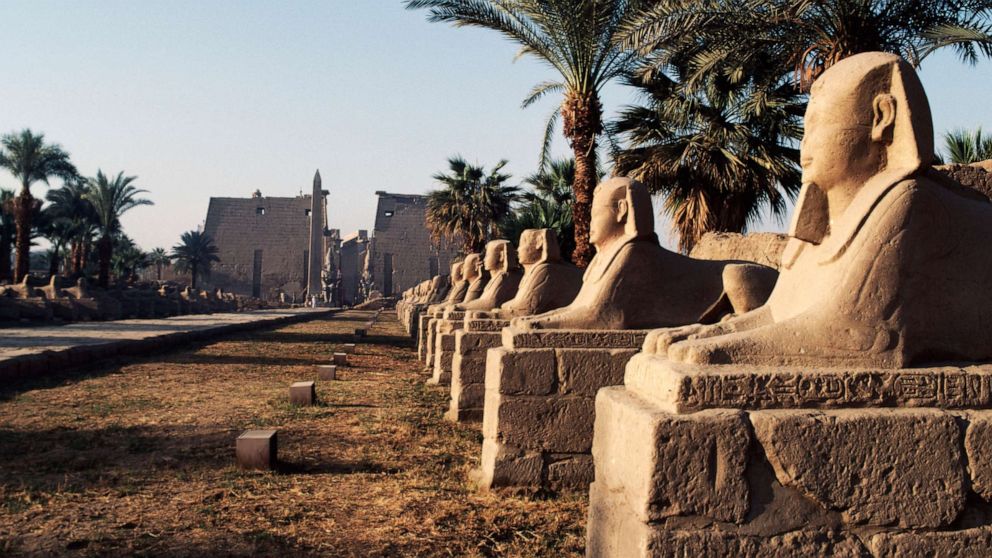 In short, more historic accuracy would have made this show more powerful, rich and extraordinary in its impact.

Cairo’s 2021 Mummy Parade: an example of a great immersive Egypt show for all

It is possible to create a spectacle that is both visually arresting, appealing to the public, and informative too. Take the Golden Mummies parade in Cairo in Spring 2021. Goddesses bearing light. Great Kings (their mummies) being transported in special winged vehicles to their new museum home. Accurate costumes and Egyptian songs. This was the perfect example of how modern artists, performers, theatrical producers and Egyptologists can come together and teach the world about this ancient civilization. 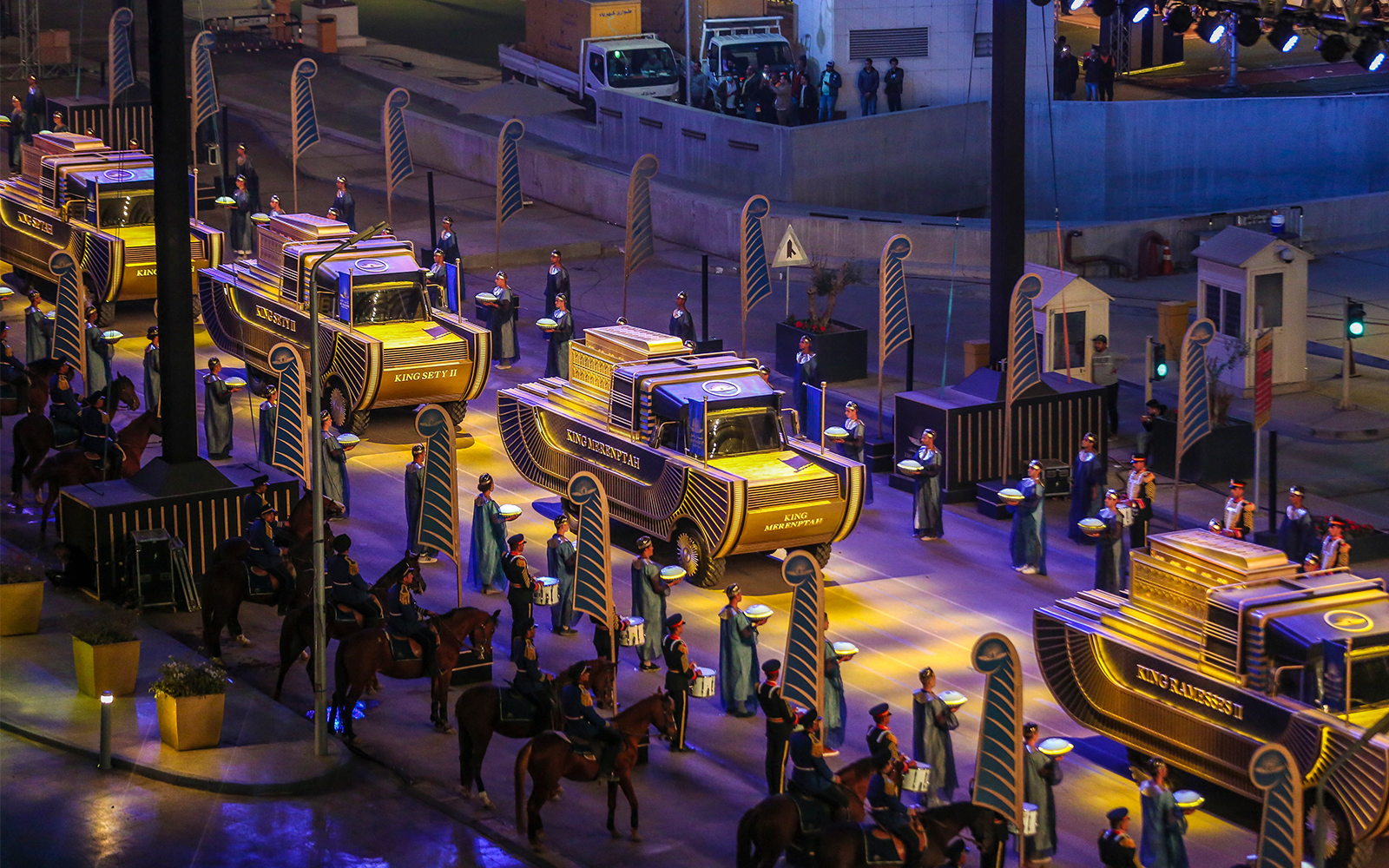 DW Made for minds. A convoy of vehicles transporting royal mummies in Cairo, Egypt. Each mummy was transported in its own special wagon. Recovered from https://www.dw.com/en/golden-parade-mummified-pharaohs-moved-to-new-cairo-home/a-57094353

So the verdict on Immersive Tut? Visually exciting. Creative. And a great live experience after the isolation of COVID. But ultimately it is a show with the wrong title. Sure it’s the anniversary of the tomb discovery this year, but the exhibit has little to do with Tutankhamun and even less to do with the discovery of his tomb. Still Immersive Amduat I am sure would sell less tickets!

Come for the ride… but leave your textbooks (and analytic mind) at home! 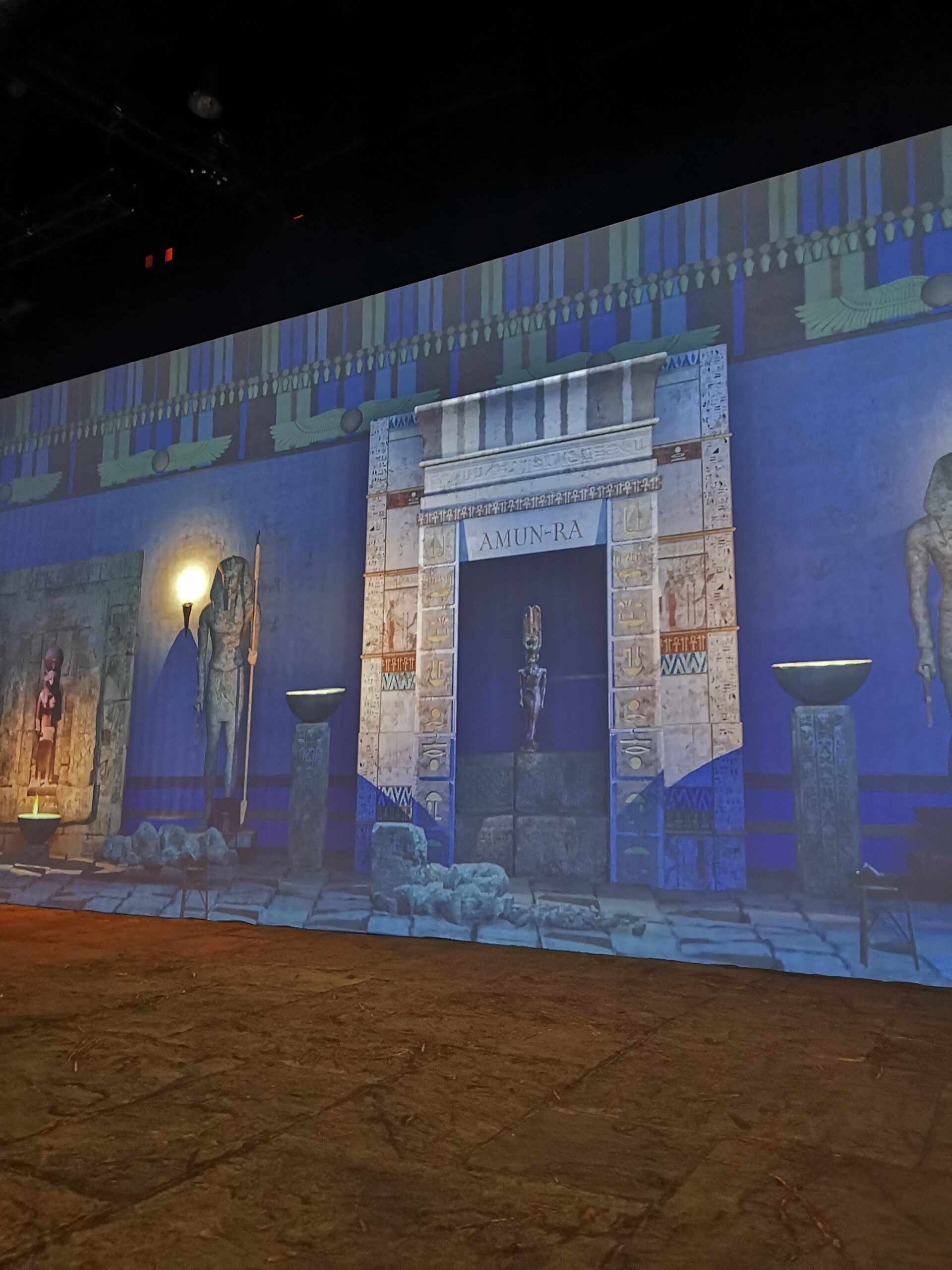