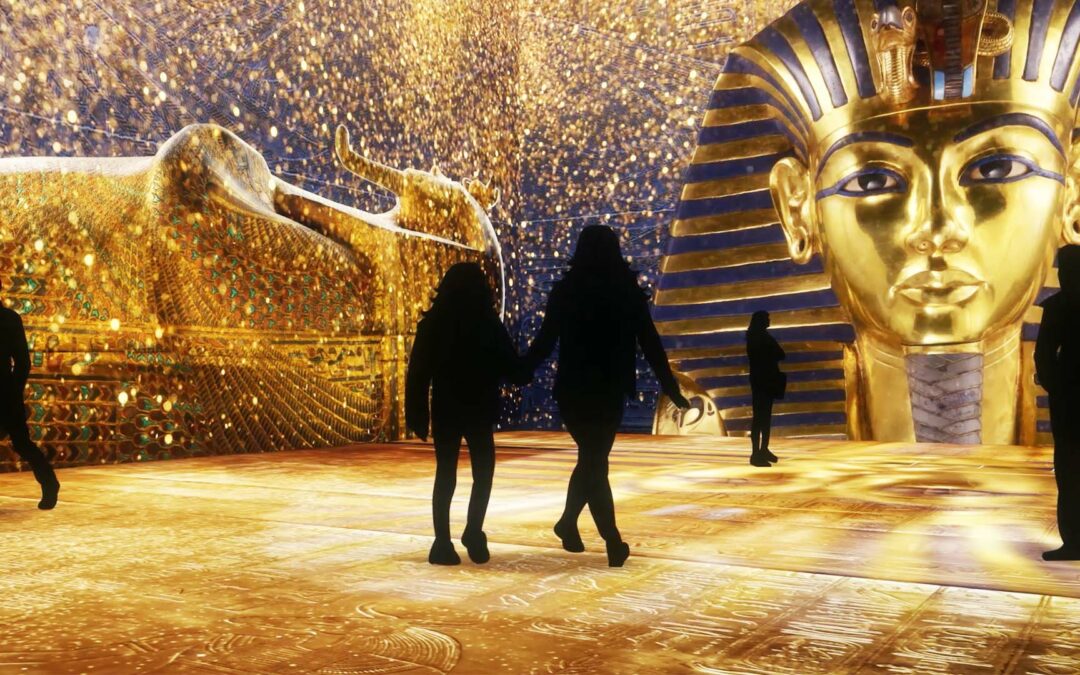 By Eric Vasallo (for Ancient Egypt Alive)
On July 6, 2022, we had our roving reporter, Eric Vasallo attend the world premiere of Beyond King Tut in Boston. Here is his story on the show, the ideas behind it, and what he experienced. Since COVID changed our lives forever, life on Earth has become increasingly meta and online as social distancing has become our new normal. Blog sites such as Ancient Egypt Alive have evolved to offer a variety of opportunities to learn about Ancient Egypt without having to fly to annual conventions or even visit far away museums. Online workshops, seminars and now, the next level – immersive virtual reality experiences enable audiences to see, feel and visualize in high definition and surround sound what these worlds may have been like to the ancients.

Currently, there are two exceptional virtual exhibits touring North America to commemorate the 100th anniversary of the discovery of King Tutankhamen’s tomb. A king that lived over 3,300 years ago and who was just a boy when he inherited the throne at the age of 9. Not only is he eternally alive in our minds thanks to the unprecedented riches of his tomb and solid gold face mask, but he is also renowned for being the son of rebel King Akhenaten. Akhenaten was a heretic king whose depictions suggest he was the first gender-fluid king on Earth and who led a disastrous Amarna Revolution, forming the world’s first monotheistic religion. A ruler whose excesses nearly bankrupted the Egyptian empire.

Why Tut became a global “phenom”

The wealth of Tut’s tomb certainly conveys a reverence for a ruler that restored order from chaos and the worship of Egypt’s many gods, reversing the damage done by his father before him. Tut was also the son (or stepson) of Queen Nefertiti, who aside from Cleopatra, is considered the most fascinating and beautiful queen of Ancient Egypt. Her tomb has yet to be found, but there is a belief that it might still be hidden inside King Tut’s tomb behind a false wall is kept alive by countless people around the world dreaming of another discovery equalling the grandeur and importance of her son’s intact tomb.

Beyond Tut show: An augmented experience that delves into the life of Tut

These touring exhibits promise to deliver a richer, meta experience and a deeper understanding of the stories behind these artifacts you see behind glass cases in museums around the world. In a joint venture with National Geographic, Beyond King Tut – The Immersive Experience invites audiences to learn the life story of this historic figure that has captivated the world’s imagination for the last 100 years and will probably continue to do so for generations to come. Creative Producer, Mark Lach’s intention wasn’t to just make an immersive experience, but to also provide a fuller picture of who King Tut was. It opened today July 8th in downtown Boston at the historic SOWA Power Station.

As you enter the experience you are wrapped in darkness, the tone immediately set. Dimly lit, tomb-like spaces, bright blue, gold, and brown colours meet the eyes, provide to instill both a sense of comfort and wonder about what is to be revealed. The first space is dotted with faux stone walls and openings revealing illuminated vintage photos of Howard Carter’s original discovery in the heart of the Valley of the Kings. That world-changing moment when Egyptian workers broke the false wall and Carter peeked into the intact tomb for the first time.

Lord Carnarvon “Can you see anything?”

Carter, holding a flickering candle to illuminate the tomb, 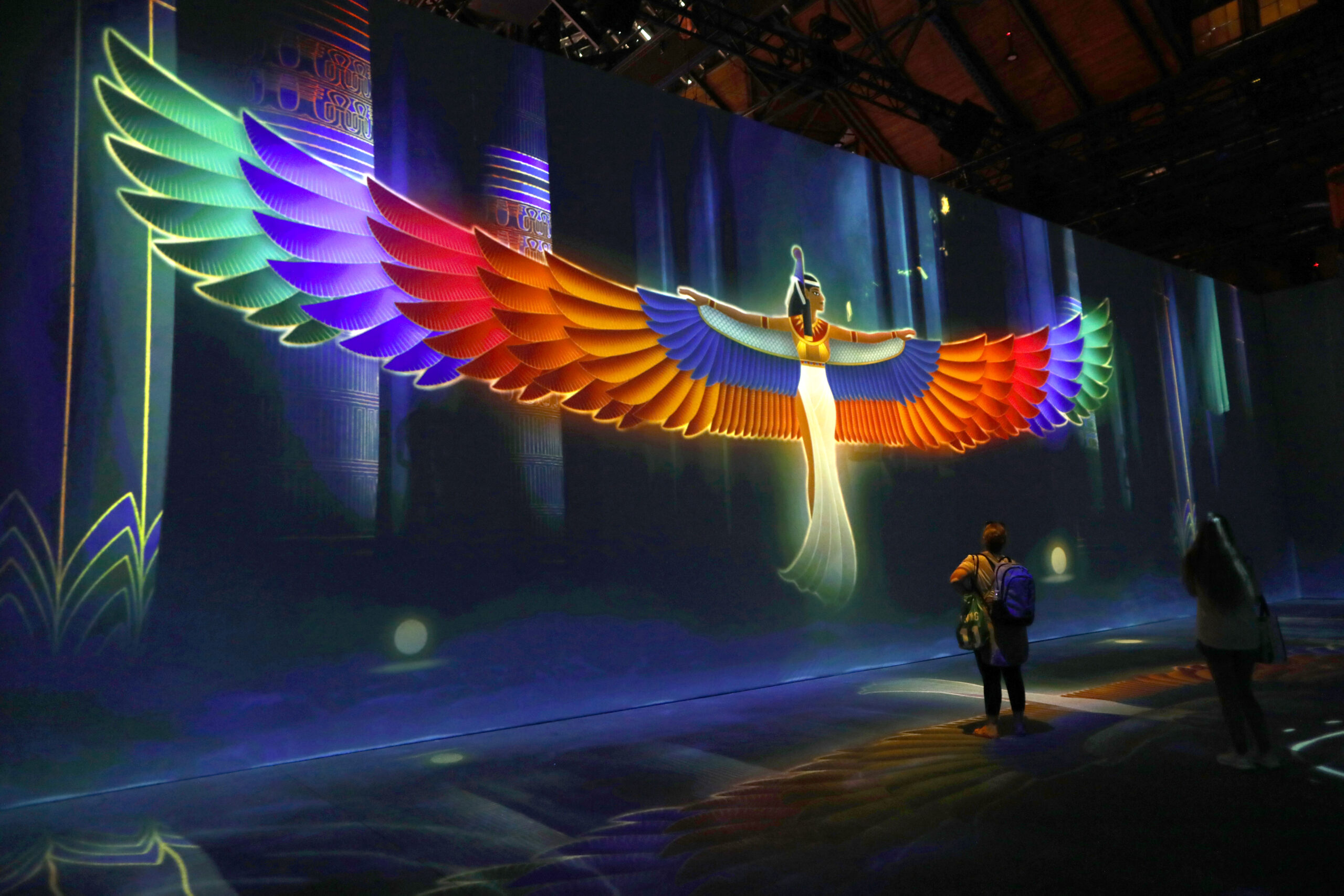 The next room boasts a huge life-size replica of King Tut’s gold-plated wood shrine with its many smaller shrines nested inside. This great shrine is surrounded by a 360-degree video illuminating the first leg of the king’s journey into the afterlife. It provides a simulated peek at the series of nested sarcophagi held inside the shrine, each smaller than the next, like Russian dolls until the mummy of the King is revealed.

The experience leads you into another hall which tells the story of King Tutankhamen’s family and heritage. Here, you also encounter a larger-than-life-size ancient Senet game with instructions, inviting visitors to play. A great diversion for kids of all ages. Several examples of this ancient “snakes and ladders” style game were found inside his tomb. 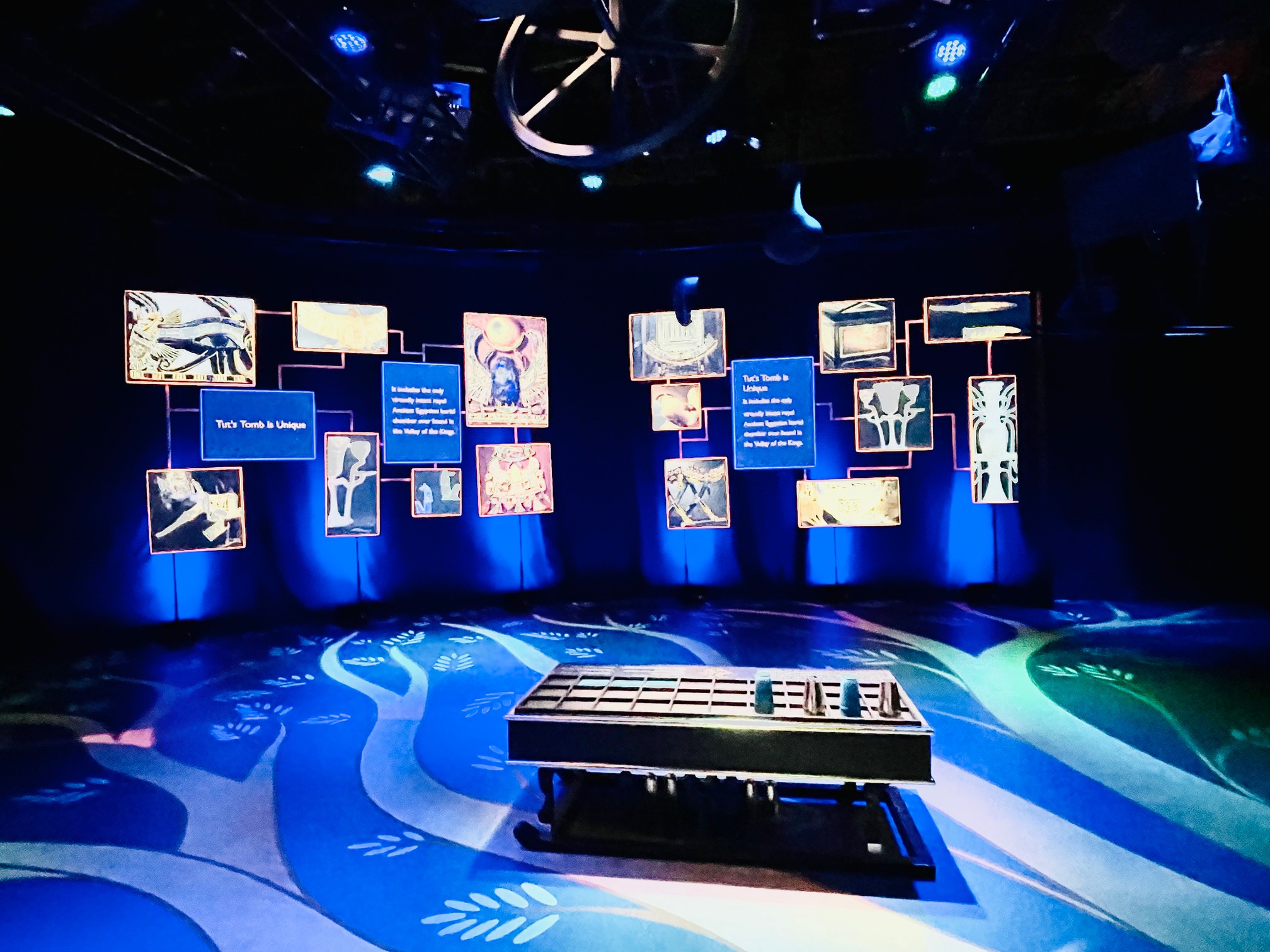 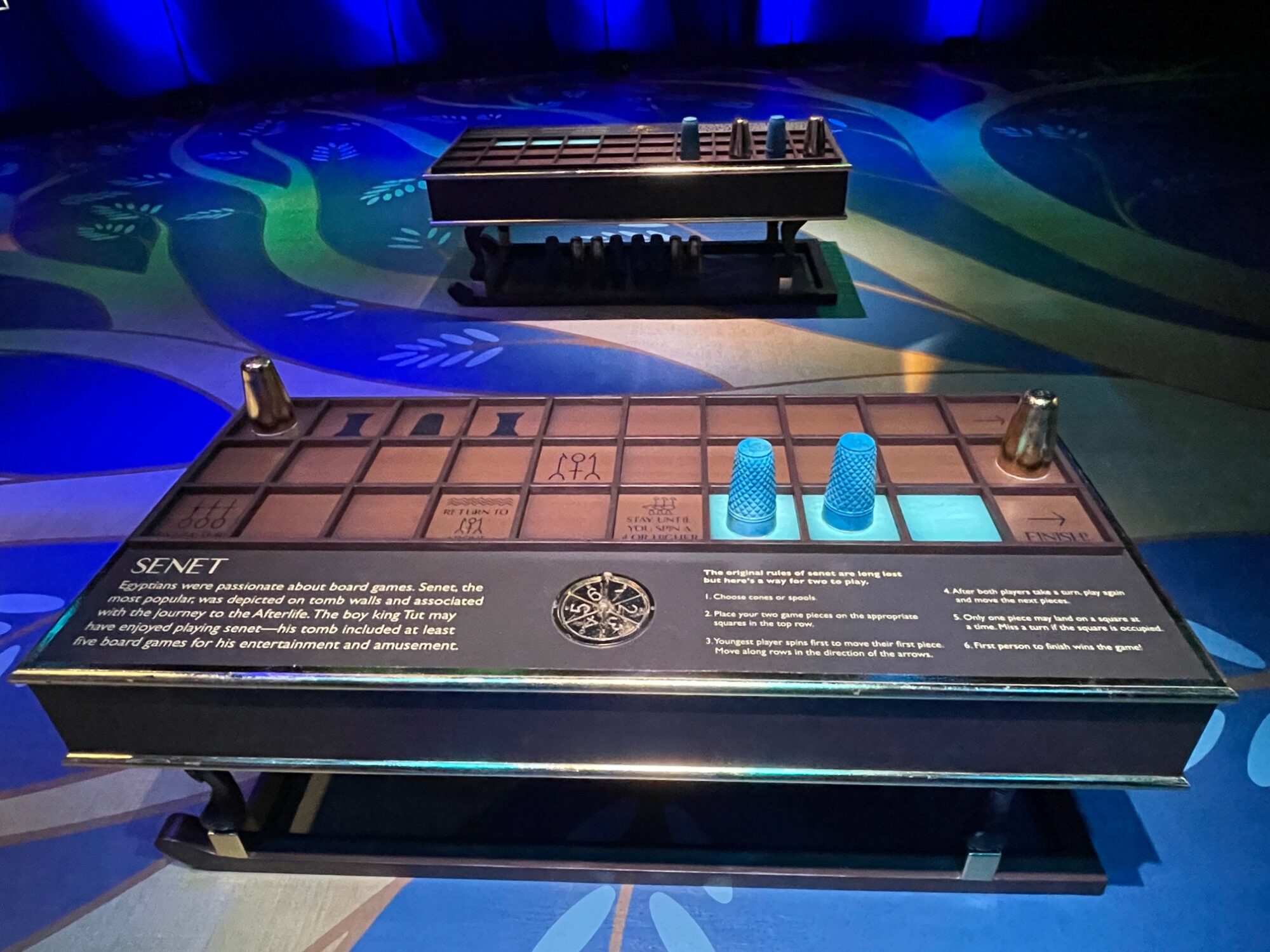 Next stop is the Mummification Room where you can see a simple and easy-to-understand step-by-step illustration of the embalming process.

Travel with Tut on his journey through the afterlife

Following that space is the Verses of Immortality hall which highlights different magical themes found in the Book of the Dead.

The next space is a vast space presenting a wondrous, goosebump-inducing immersive experience of the boy king’s journey through the afterlife. A fantastical dream of the Egyptian Book of the Dead where you witness the final judgment as his heart is weighed against an ostrich feather in the presence of Anubis and the monstrous Ammit. The adventure ends on a happy note and visitors get to ride along a wooden replica of the royal Solar Barque as the king reaches his final destination – the abundant and heavenly realm of Aaru where he will reside for all eternity.

Experience the tomb as Carter discovered it

The last stop before the well-stocked gift shop is a seven-minute, VR experience by Positron that takes you into the tomb as Carter discovered it, filled to the walls with untold riches. 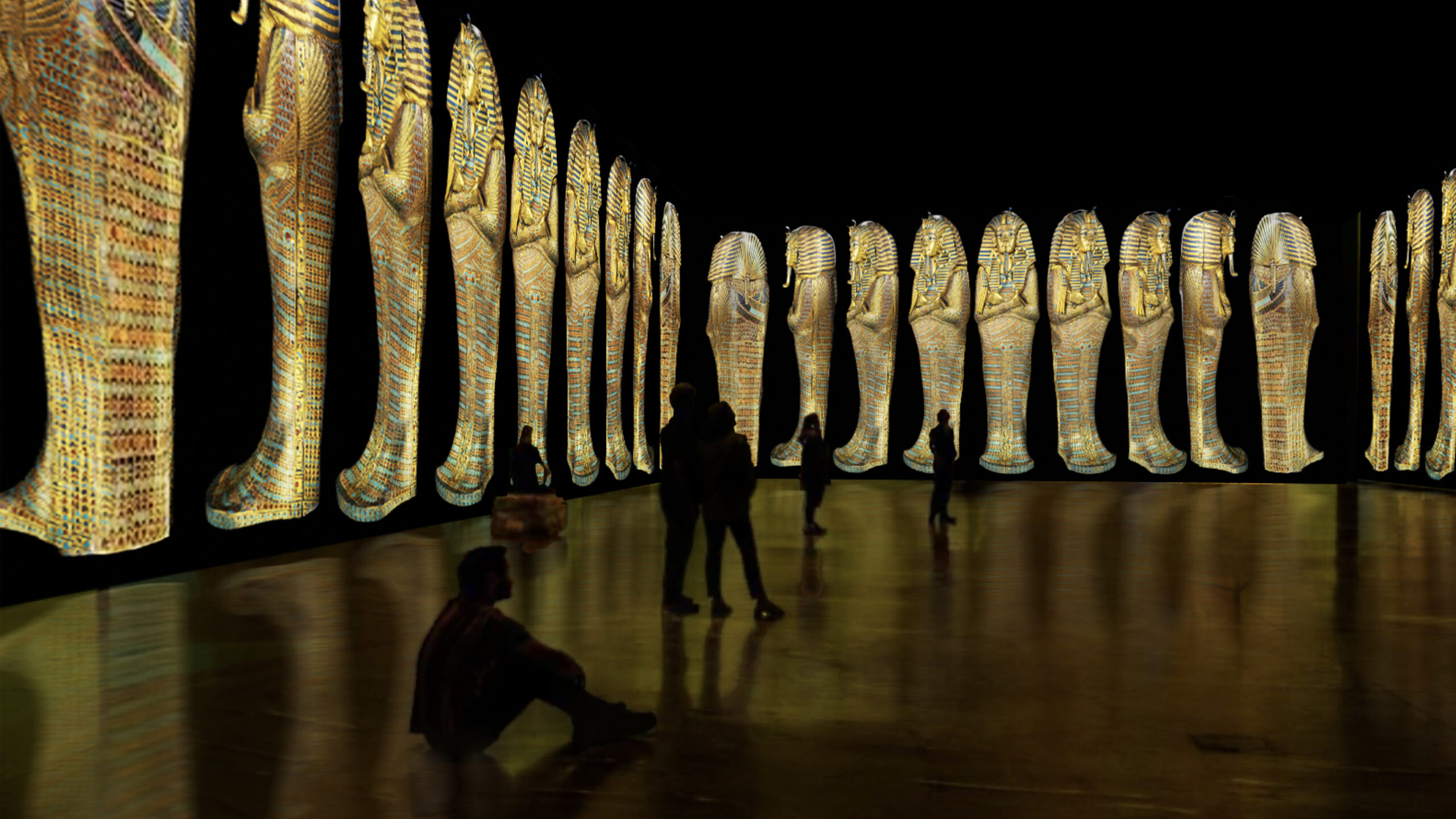 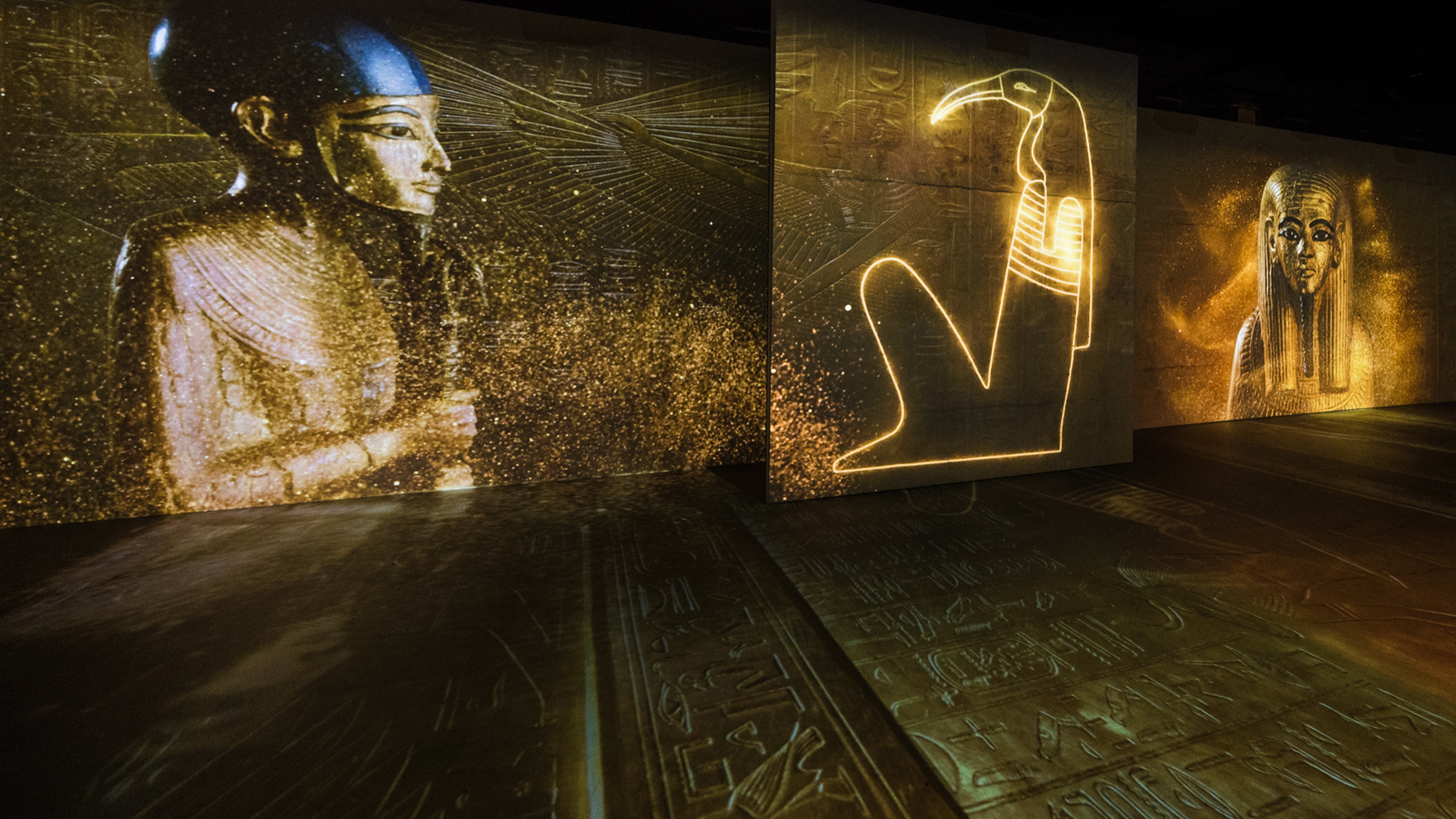 Meeting the man who photographed the golden mask

After finishing the experience, I was honoured to meet Kenneth Garrett, the National Geographic photographer responsible for all the photos of the artifacts displayed in the exhibit. He also captured the historic September 2010 cover photo of the ubiquitous golden death mask of King Tut in the Cairo Museum. Kenneth gushed as he shared the story of how difficult it was to properly photograph the mask since it had so many surfaces of gold and precious gemstones. Ultimately, he had to use six strobe lights and reflectors and Egyptian authorities only gave him 45 minutes before the museum opened. He also related that it took him about two weeks to photograph all the artifacts stored in the basement of the Cairo Museum that have never been exhibited since Howard Carter delivered them there. All these artifacts of the boy king will finally be displayed in the new Grand Egyptian Museum when it opens later this year. 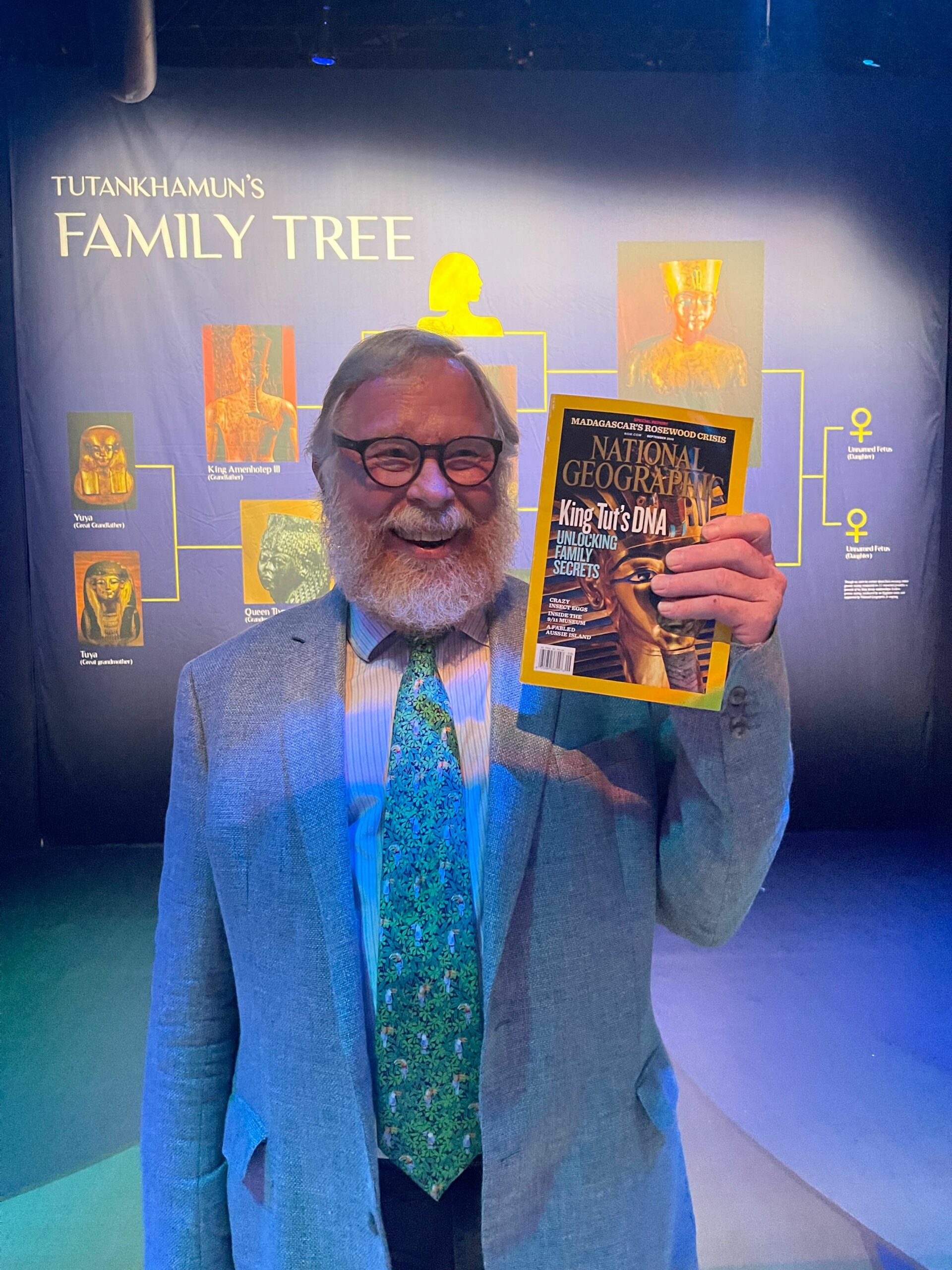 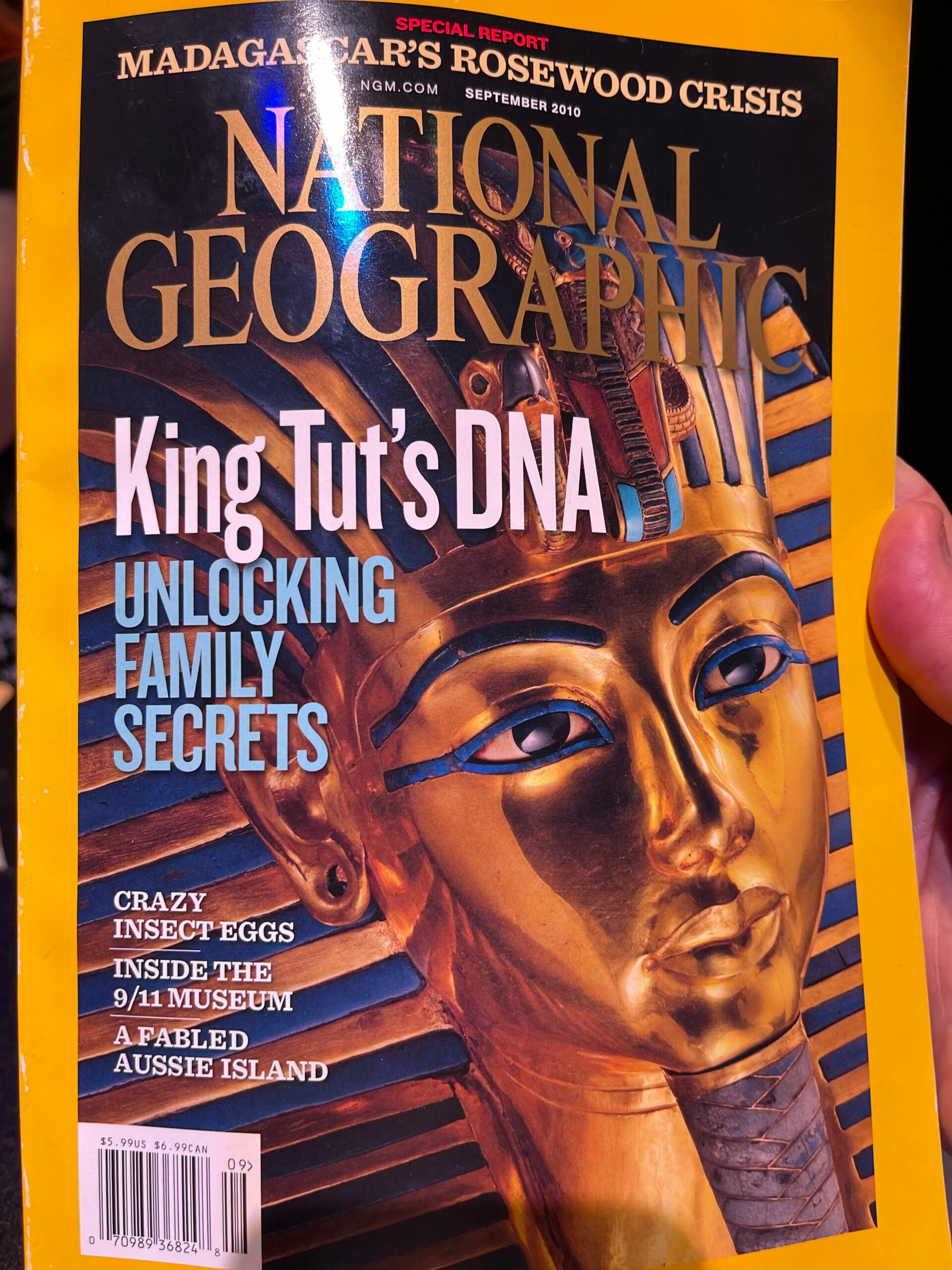 Due to the fragility of these very ancient objects, Egypt has decided to no longer allow these artifacts to leave Egypt forcing Egypt lovers to visit the new Grand Egyptian Museum (GEM) in Cairo to get up close and personal with these masterpieces that tell the story of the richest, most influential culture on Earth, the story of us. *Estimated to open in November of this year.

Tips on attending the show in Boston

Avoid parking in lot next to Tut exhibit which is $30. The other lot at 500 is $9- for 2 hours. Also, a short walk away off Harrison Avenue and Albany street, under highway overpass has EV car chargers and is $5 for up to 3 hours.

The other virtual Tut experience is brought to life by the creators of the Van Gogh, Frida Kahlo, and The Art of Banksy exhibits. Lighthouse Artspace Productions presents their North American tour of Immersive King Tut – Magic Journey to the Light which promises to take audiences young and old on a fantastic journey to the mythic realm of the Egyptian afterlife. First stop on their tour is Denver on July 22nd then onto Toronto and Los Angeles, as well as 11 other cities across America. Stay tuned to this blog to learn more about this second immersive adventure seeking to revivify the life of Tut – and ensure his legacy goes on for millions and millions of years. 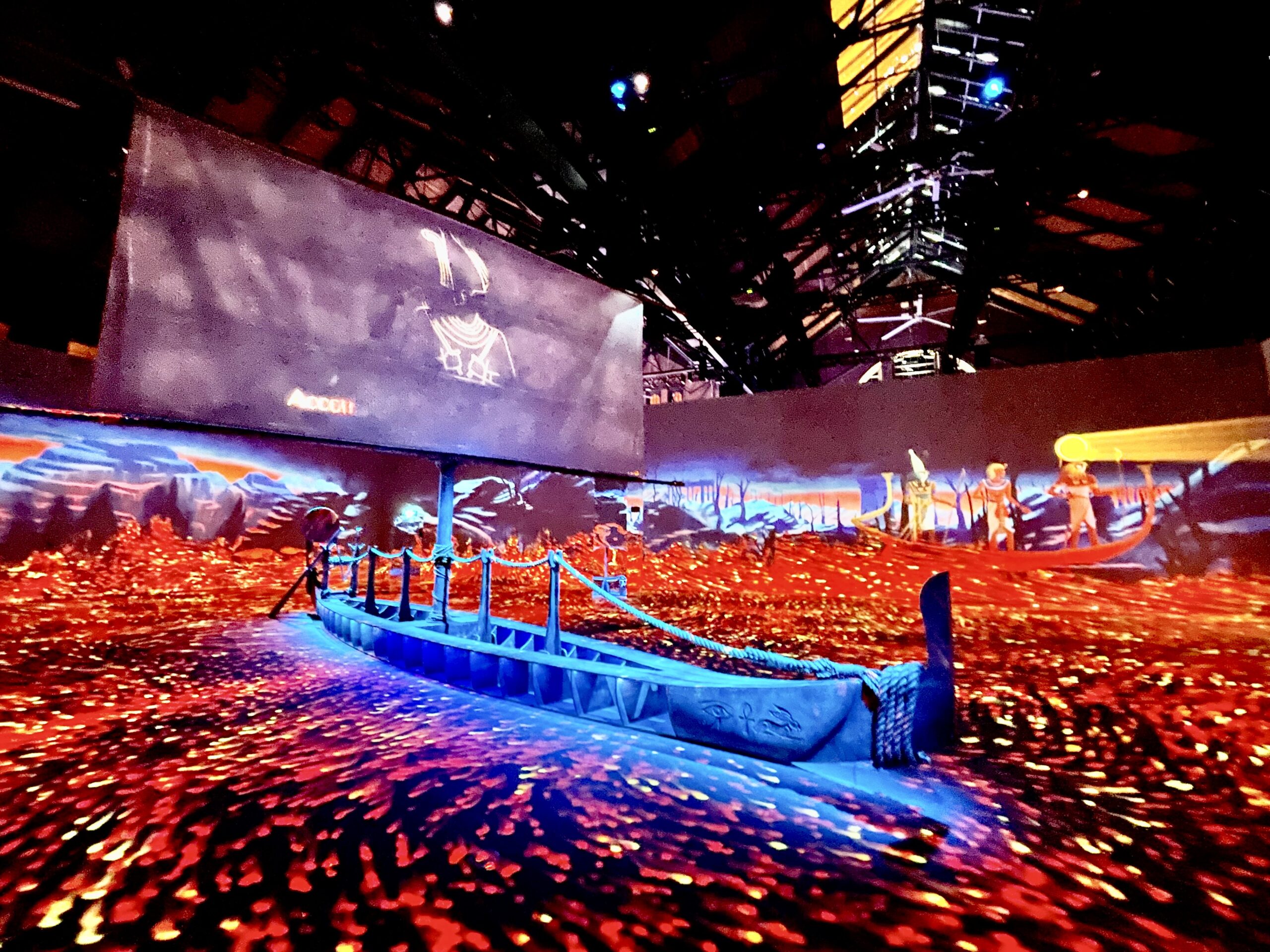 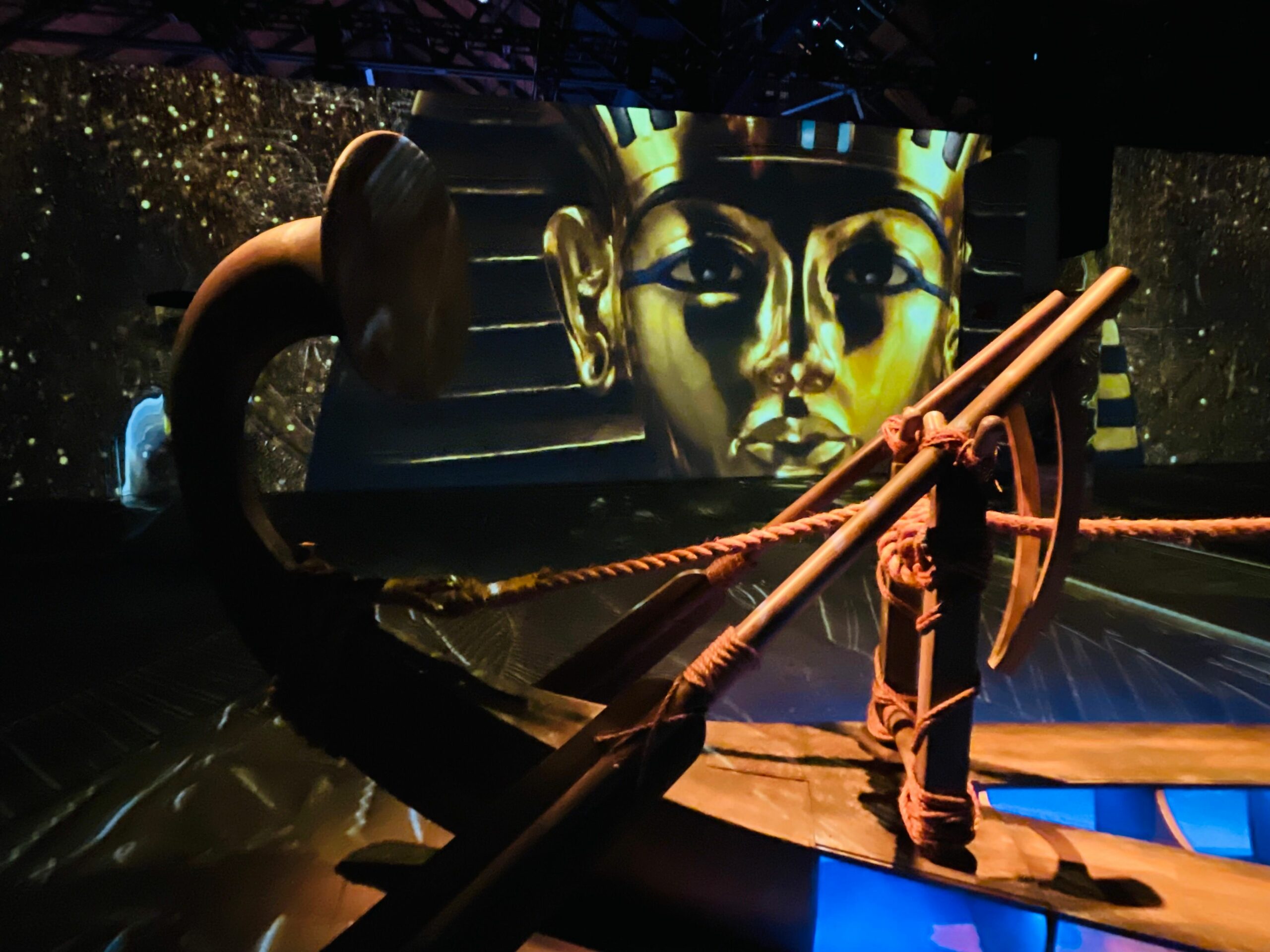