A Visit to the Egyptian Museum in Barcelona 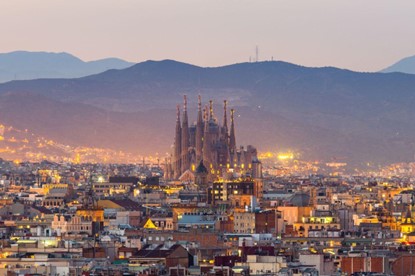 Have you ever visited the great city of Barcelona in Spain? Whether yes or no, you’ve surely heard of its great monuments like the Sagrada Familia and its famous soccer team, FC Barcelona. Maybe you’ve tasted its delicious food, scrumptious Spanish dishes like crema Catalana. But on my visit to Barcelona a few years ago, there was one not-to-be-missed attraction… its famous Egyptian museum! 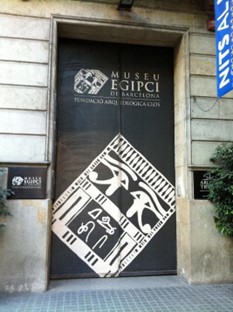 Between the magnificent Casa Batlló and Casa Milà, striking works of the architect Gaudí, you find the first museum in Spain dedicated exclusively to Ancient Egypt. It is the Museu Egipci of Barcelona (the Egyptian Museum of Barcelona), one of the most important repositories of Egyptian archaeology in Spain. The museum holds nearly 1200 artifacts displayed in temporary and permanent exhibitions, a specialized bibliographic collection, and a vibrant education centre offering courses and events throughout the year. No Egyptophile should miss this! I certainly didn’t – and waited for the opportune time to visit. 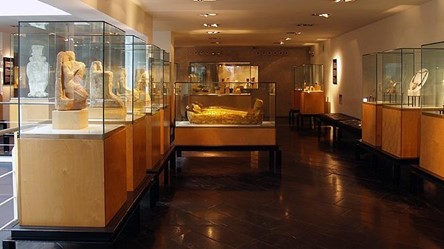 After several days of exploring the city of Barcelona with my sister, I took advantage of a hot summer afternoon to visit the nicely air conditioned museum.. The collections take up three floors: the first floors two display the permanent pieces, while the third is dedicated to temporary exhibits. While I promised my sister we would only be there for a couple of hours, it turned out to be a very long and engrossing afternoon at the museum.

Born of a private collector’s passion

The museum was born in 1992 through the passion and initiative of a private collector, and Spanish hotelier Jordi Clos, who was mad about Ancient Egypt. His collecting journey started with the purchase of a terracotta ushabti from an antique dealer in Luxor in 1975, and expanded over the course of almost twenty years. In 1992, he unveiled around 70 of his stunning archaeological purchases at Barcelona’s Hotel Claris. It drew rave reviews and financial support, leading to the creation of ‘Fundacio Arqueologia Clos’ (The Clos Archeological Foundation) who opened the current museum in 1994.

My five favorite pieces at the Museu Egipci in Barcelona

The collection is divided into several categories: positions and characters, the pharaoh, jewelry, stone and ceramics, cosmetics and eroticism, beliefs and funerary practices, and worship in the temples and gods of Egypt. It’s an impressive series of exhibits that spans Egypt’s 3000 years of history with important artifacts, temple and tomb reliefs, and even mummies! (something that surprised and slightly crept my sister).

While I devoured every inch of this museum like a child in a candy store, here are a few pieces that really shone out. 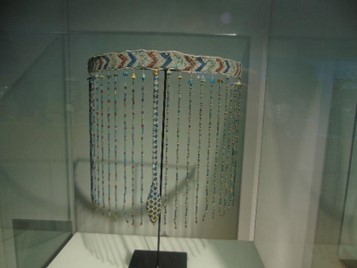 I must confess, I have a weakness for Ancient Egyptian jewelry and fashion. Maybe you love it too? You may have seen these belts in many Ancient Egyptian reliefs and paintings, but it is totally enthralling to see this piece of clothing in real life, as it would have been worn by ancients 3500 or more years ago.

The ceremonial belt (besau) is one of the many symbols associated with the pharaoh, although after the Middle Kingdom it also began to be worn by the women of the royal family. It is made with beads of different colours. Particularly noteworthy is the cobra hanging from the middle of the belt. It reminds me of the uraeus on Egyptian crowns and, in the same way, it symbolizes the goddess Wadjet and her divine protection of the Egyptian monarchy. 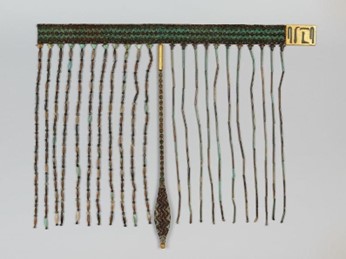 “Garment of Senebtisi”, Metropolitan Museum of Art, recovered from the Rogers Fund https://www.metmuseum.org/art/collection/search/692409

The Museu Egipci of Barcelona has compared this belt with the one found in the tomb of Princess Senebtisi in Lisht (1990-1786 BC). Undoubtedly, the design is very similar, but the one worn by the princess has a bit more detail, as you see above, including a brooch, additional beads, and a greater predominance of green and gold. 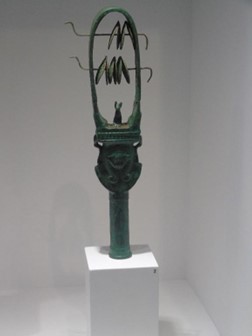 It may look like a fancy can opener, but this is an Ancient Egyptian percussion instrument, a rattle sacred to the goddess Hathor.  They are quite rare, and finding a sistrum in a small museum like this is like finding a small treasure. This sacred music maker was shaken vigorously by ladies in different dances and religious ceremonies. The sound was thought to ward off evil spirits and protect women and infants. 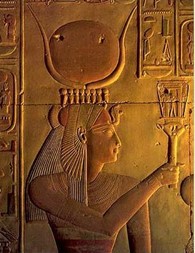 What is even less common is to find two ancient sistras in the same small European museum. The sistrum is related to the cult of different divinities, but especially Hathor, the cow goddess of love, beauty and music. She appears on the handles of  both of these sistras. The horseshoe shape of the upper part of the musical instrument is sometimes thought to represent the horns of this cow goddess. 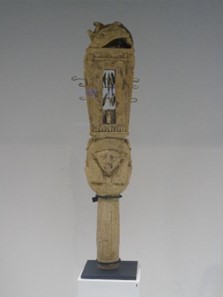 The cymbals and metal rods inside would create the gentle rustling sound when the sistrum was shaken. 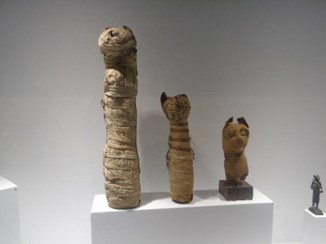 I hope that cat lovers will forgive me, but I must include the fine mummies of two very young cats. Mummification was a common practice in Ancient Egypt, especially cats, as they were considered an earthly representation of the goddess Bastet. The museum has two cat mummies, one young adult and one baby, which have been studied in depth thanks to Dr. Mª Luz Mandago. In 2011 a project began to study the mummies of animals through radiographs to determine their state of conservation and possible pathologies. Here is a link to a video that the museum made of the 3D reconstruction of the mummy of the little cat: https://www.youtube.com/watch?v=1EX-blEpKig 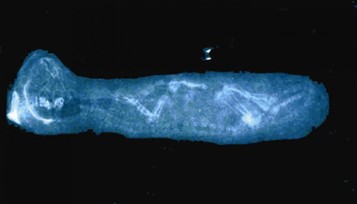 Thanks to this study, it could be determined that the mummy of the baby cat presents a cranial traumatism. This seems to suggest its death was caused by a funerary sacrifice. Sadly (to cat lovers) this practice became widespread in Egypt, especially from the Late Period onward. Hundreds of thousands of mummified cats, items of devotion at the temples, have been found. 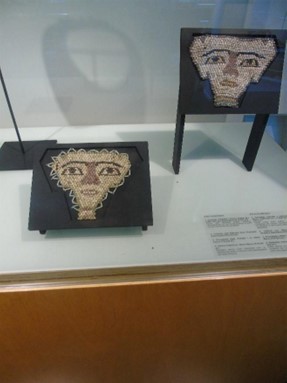 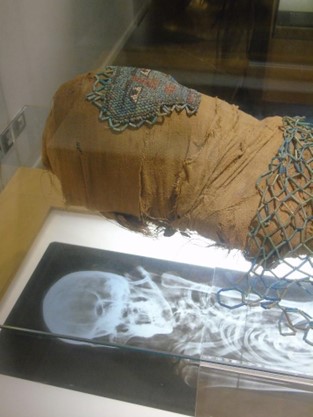 The museum displayed it artfully on one of the mummies in their exhibition. It is a small detail that, undoubtedly, helps to visualize how these peculiar funerary jewels would have been used. Hey, not everyone could afford an elaborate gold and lapis lazuli mask like King Tut’s! I would be happy with this one. 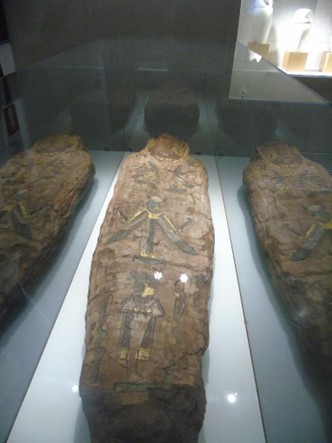 Unsurprisingly, my number one favourite piece at the Barcelona Museum is the famous lady of Kemet, also known as the golden lady. 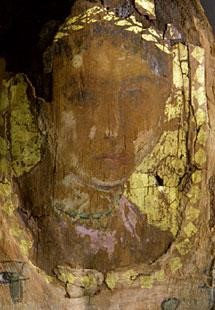 This Roman-era mummy belongs to a teenage girl of about 15 or 16 years old. She stands out strikingly, as a real beauty, in the golden portrait that graces her mummy’s face. Thanks to a helical CAT scan made by Dr. Felix Escalas, it has been possible to reconstruct the complete skeleton of this mummy. This has provided valuable information about the life of this young woman. 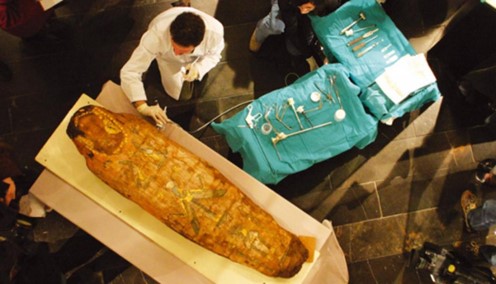 Most importantly, the reconstruction has verified that the face represented in these bandages is that of the young woman, as pictured in the portrait. She was indeed a beauty. This encaustic wax portrait of the lady of Kemet is of the same technique and historic era as the famous Fayum portraits. They hail from the era of Roman Egypt during the first century CE.

You immediately notice more naturalistic representations of the deceased as compared to what we are used to in Ancient Egypt. These works were painted on boards or fabrics to cover the faces of the mummies. They are also a wonderful source for our understanding of Roman jewelry, fashion and hairstyles! 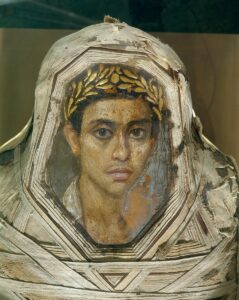 Rogers Fund, “Mummy with an Inserted Panel Portrait of a Youth”, Metropolitan Museum of Art, recovered from https://www.metmuseum.org/art/collection/search/547697

There are so many wonderful pieces on display in the Museu Egipci of Barcelona, many giving you a rare window into daily life in Ancient Egypt.  What will be your favourite? If you ever have the opportunity to travel to Barcelona, the Egyptian Museum should definitely be on your list of must-visits.