Long Before Pride: Hidden Love and Sex in Ancient Egypt 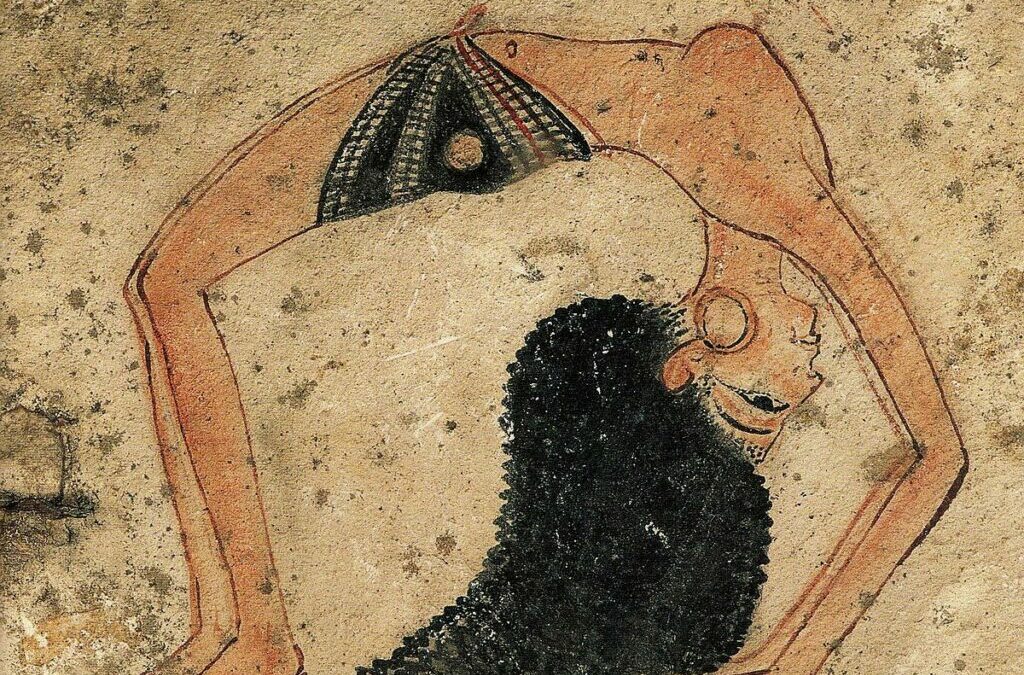 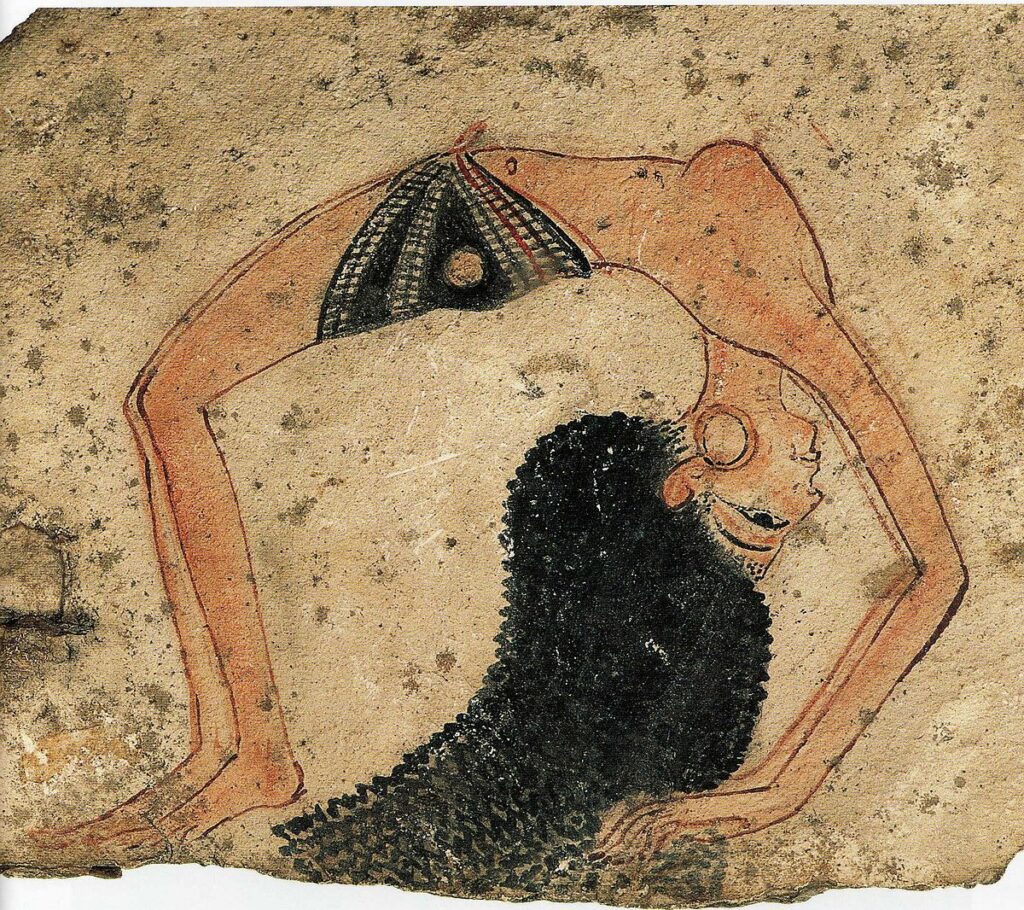 Although Ancient Egyptians loved a good parade, with risqué dancers in skimpy outfits doing fabulous back flips… being heterosexual was the cultural norm. It wasn’t like Greece with those oiled up athletes and kinaidoi (literally, “genital movers”) – young boys who pleasured their elders. No pride – and no “gay old times” were celebrated. At least not openly.

Homosexuality in fact, was a sin, according to Egyptian religion. Prior to being welcomed by Osiris into the beautiful afterlife, the deceased’s soul must pass a series of trials. One of them was reciting 42 negative confessions before a jury of gods, confessions set out in the chapter 125 of the Book of the Dead. Like the precursor of the ten commandments, they include things like I did not steal, I did not lie… and “I did not nk a nkk(w).”nkk(w)“, loosely translated as “I did not have penetrative sex with a sexually passive male.”

Yet there are some fascinating sources of evidence for non-traditional relationships found in the archaeology, reliefs, and texts of ancient Egypt.

Let’s begin, in all unlikely places, with the gods themselves. Really famous ones, in fact: Horus and Seth. 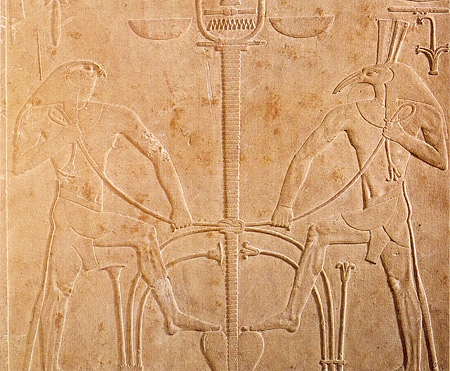 Horus and Seth: contendings of an intimate kind.

No doubt you know about Horus, the hawk god and god of the living king, who sought to avenge his father’s murder by his Uncle Seth, god of deserts and storms. You may have heard about the contendings of Horus and Seth, and how Horus lost an eye, but ultimately prevailed.

The uncle invited Horus to “make holiday in my house”, persuading the hawk god to sleep with him. The text in this mythology translates rather luridly as “But during the night, Seth caused his phallus to become stiff and inserted it between Horus’s thighs…. Then, Horus placed his hands between his thighs and received Seth’s semen”.

Horus runs home to his mother Isis horrified, saying “look what Seth has done to me”. The strange story continues with Isis hatching a plot for revenge: gathering Horus’s semen, spreading it on lettuce (a sexy delicacy enjoyed by Seth) and causing Seth to eat it and thus become impregnated by his nephew.

The moral of the story: same sex relationships may have been frowned upon for ordinary Egyptians, but rapist stories involving the immortal gods were all good reading — and part of the religious mythology. Certainly, you may never look at lettuce the same way.

From the Middle kingdom text “The tale of King Neferkare” comes a story that suggests King Pepi II, that long-lived king of the 6th dynasty, was not just ineffective, but likely effeminate. At least he seems to have preferred his general to his queens. According to the tale, Pepi would creep from his palace at night and sneak over to the home of Sasenet, his dashing, unmarried general … scurrying home before dawn.

Then there is the famous pharaoh Akhenaten. There is a good reason a contralto sings the king’s arias in Phillip Glass’s famous musical. No king in Egyptian history has ever been depicted with such sexual ambiguity: big hips, small waste, sensual features.  In one of the startling colossal statues that lined the entrance of his temple at Karnak (now in the Cairo Museum) he is depicted as naked, with no sexual organs. 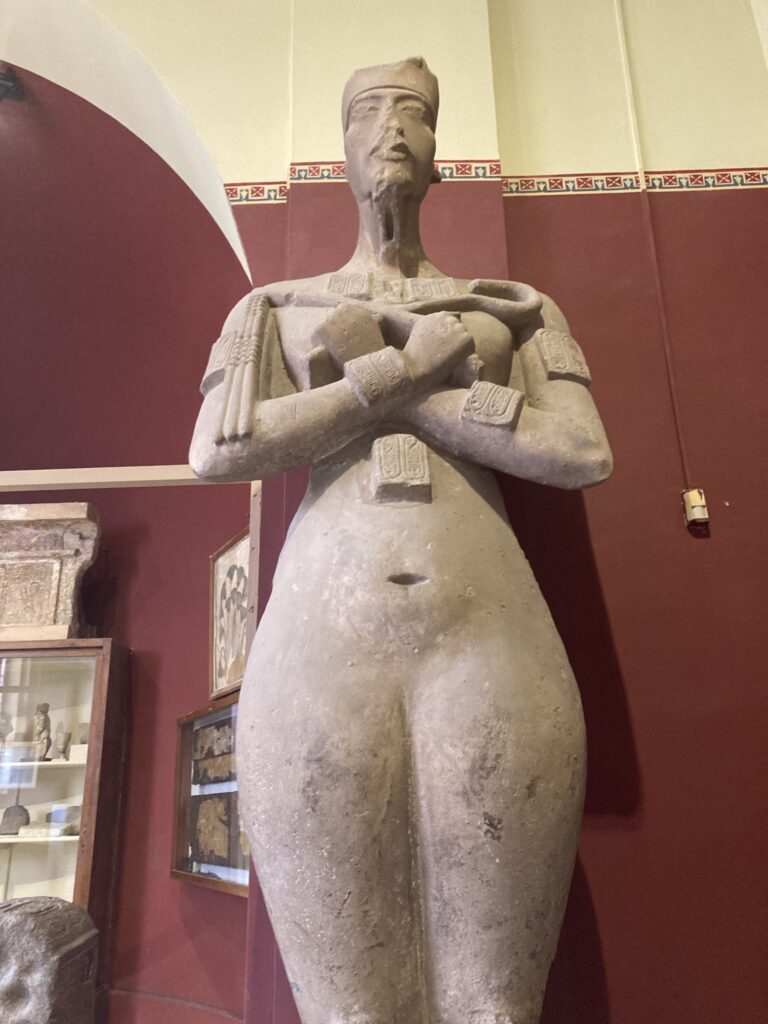 Was he deformed? Mad? Trying to symbolically portray himself as divine mother and father of the country? The latter is probably accurate. But also, I fervently believe, this sensitive, poetic, narcissistic Pharaoh who penned the beautiful “Hymn to the Aten” was bisexual by nature – fully embracing both his feminine and masculine side. It is ironic that he was married to arguably the most beautiful queen in Egyptian history: Nefertiti.  Did he also have relations with the shadowy figure of Smenkhare?  Perhaps were he alive today, he may have gone the trans route. But this is all fanciful speculation.

I do know in my heart, however, there would be a vibrant pride parade every year at Akhetaten city… if he and Nefertiti lived today.

Niankhkhnum and Khnumhotep: history’s first same-sex cohabitation in the afterlife.

One of my favourite tombs in the vast Saqqara necropolis is the tomb of two brothers, high officials in the 5th dynasty (c. 2350 BCE). It is a vast, beautifully decorated tomb with well-preserved reliefs.

The tomb owners’ names were Niankhkhnum and Khnumhotep and they were “royal manicurists” for King Niussere. This was a time in Egypt’s Old Kingdom when ambitious officials in the court of the king were climbing “the greasy pole of advancement” (to quote Toby Wilkinson) and for their loyalty to the king were rewarded with lavish burials and special titles. Don’t laugh, the role of the king’s manicurist was a very lofty one due to the proximity it necessitated with the king’s body itself. These brothers would be touching royal hands and feet.

The argument for this beautiful tomb being the final resting place of “gay brothers”, derives not from their “non-butch” profession, but rather from the revealing, intimate portraits of them together on their tomb walls.

In actual fact, these fellows were married and also buried with their wives. Yet the intimacy the two shared, as depicted in the reliefs, is unprecedented in Egyptian art.

In the most famous one, they are face to face, buckle to buckle, and nose to nose in a posture that many interpret as kissing. 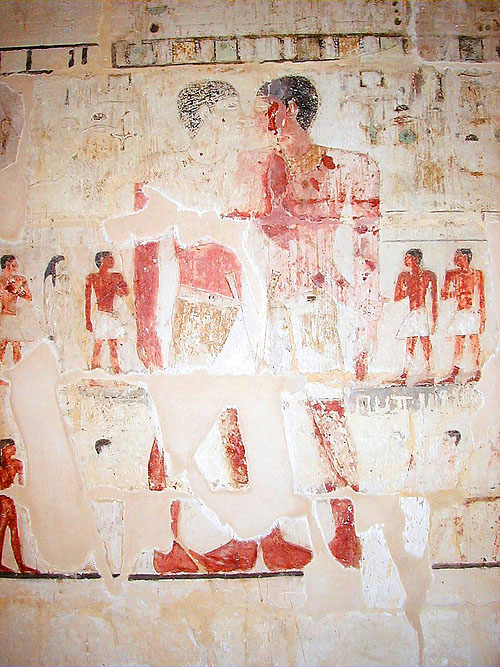 Were they brothers, questioned Mounir Basta who discovered the tomb in 1964?  Or were they twins, as the eminent John Baines suggested in 1985? Or were they just two really close work colleagues who wanted their bromance to continue in the afterlife?

If these “kissing cousins” were gay, Khnumhotep clearly played the women’s role in the relationship. A very rare scene is depicted in the tomb where he is shown to be smelling a lotus, an activity reserved expressly for women. In fact, he is one of the very few males shown to be doing this, in Old Kingdom art.

Joined together in the forever.

A final touching scene may provide evidence of this love relationship. Greg Reeder, an independent scholar who has argued extensively for the gay nature of the relationship explains it well: near the entrance of the tomb, the names of Niankhkhnum and Khnumhotep are inscribed as one name over the doorway. Both share the “Khnum” part of the name, the jar hieroglyph representing the potter god Khnum. The name Niankhkhnum on the right with the jar and the ankh sign is translated as “Khnum has life. On the left side, the name Khnumhotep is paired with the offering sign (hotep) meaning “Khnum is satisfied or Khnum is at peace.”

So, what does this all mean?  The name Khnum also means “joined together” and “to unite with”… lending a beautiful, touching message to the tomb.  This play on words, meaning “joined in life and joined in peace” signifies their special closeness — and their fervent desire to remain together in this life and the next.

We can only hope they are still enjoying millions of years hunting and fishing and doing nails together. 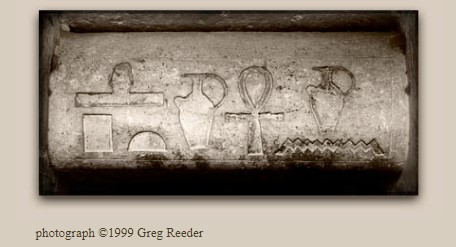 As a personal note, it reminds me of a touching modern gravestone – or gay-ve stone — I encountered in Toronto’s Mount Pleasant cemetery a few years back (a favourite haunt of mine, I admit). It marks the resting place of a gay couple, one a lawyer and the other a musician who pre-deceased his partner by 5 years. I am glad I kept the picture.

The inscription reads “come visit us in our new location!” 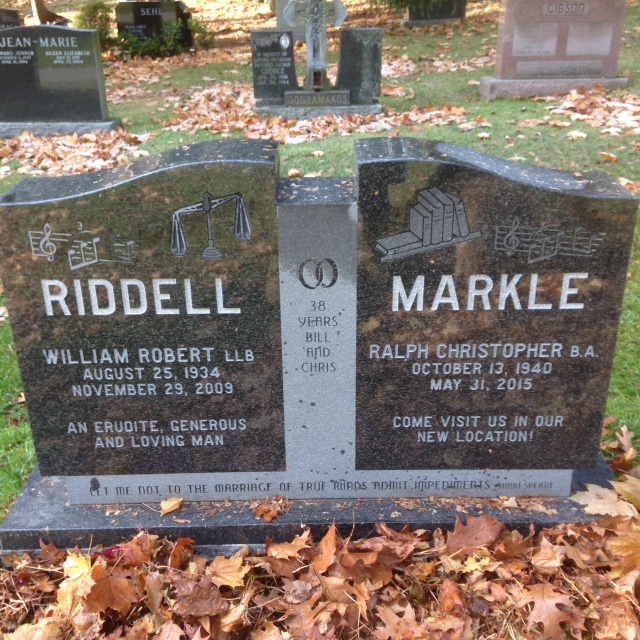 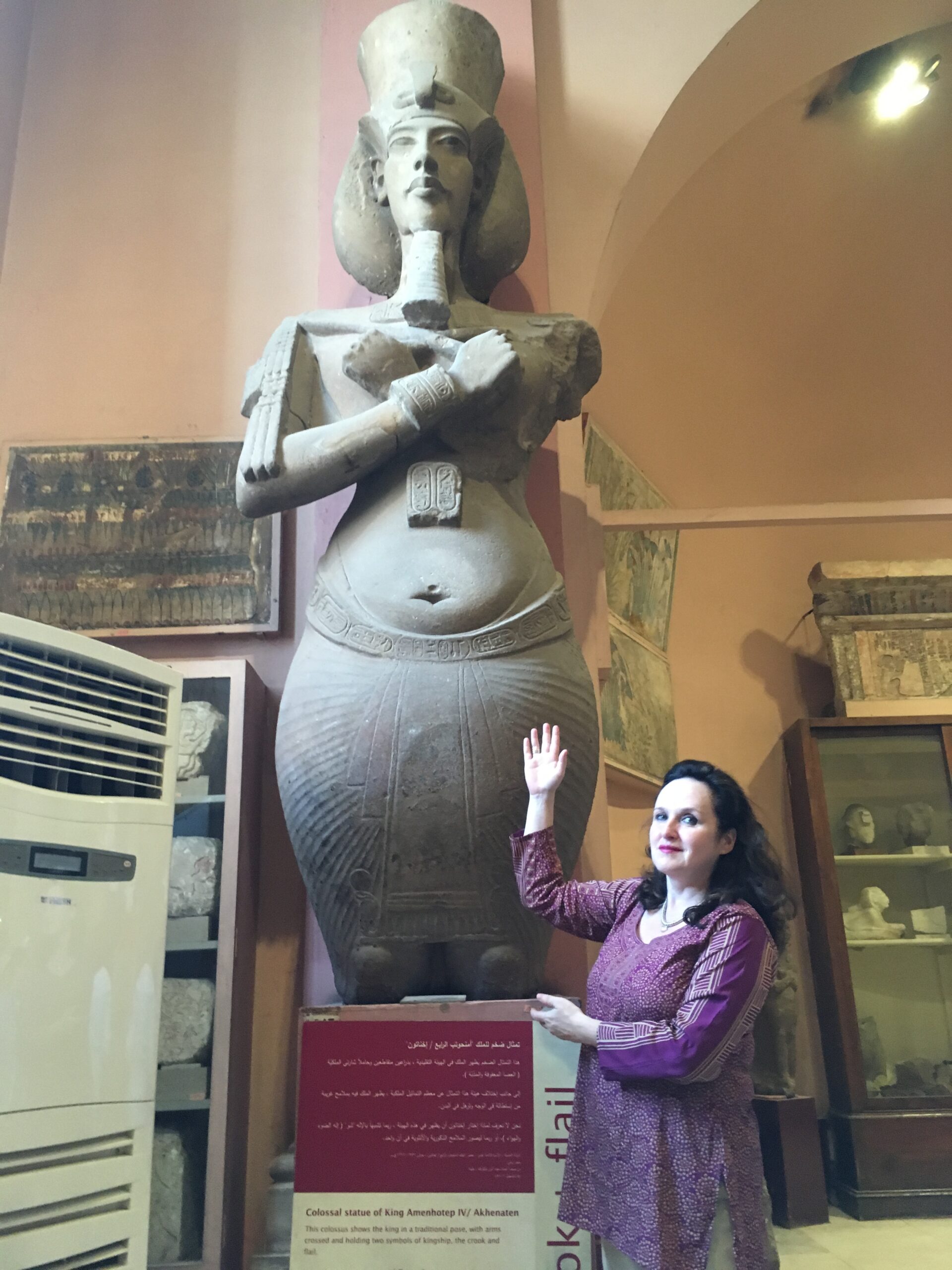