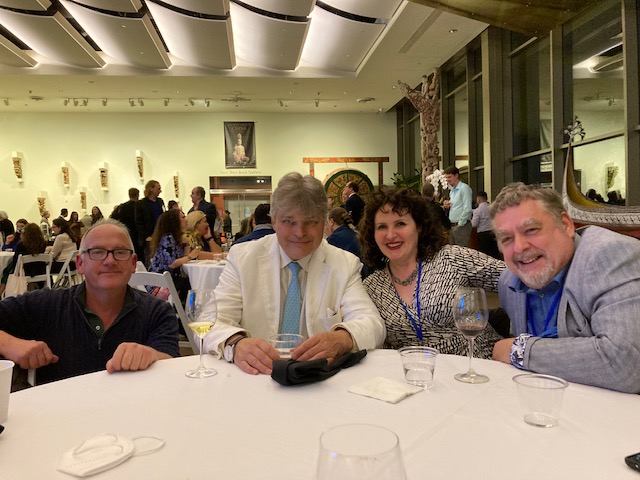 Tutankhamun stories, Highclere gin and the palpable excitement of new discoveries, fresh research insight  – in equal measure with delightful reconnection with colleagues. These were some of the things that marked the first in-person meeting of ARCE in Irvine California, the first live conference since 2019. We had a special role at the conference this year. Not presenting – but we sponsored the student access council, helping to support “Egyptologists of the future” so they could attend the event.

Many luminaries of Egyptology were there: mummy expert Salima Ikram and Kara Cooney of “The Woman who Would be King” fame to Donald Ryan, Betsy Bryan, Steve Harvey, Emily Teeter and Janice Kamrin of the Metropolitan Museum of New York. Then there were the wonderful, warm Egyptians, many from the Ministry, sharing stories of their proud finds, ongoing excavations, and re-openings.

Dozens of fascinating research papers and presentations were shared over two days. Like everyone else, I could only attend about 1/4th of them or less, as choices must be made.

Here is a rundown of just eight ARCE presentations I attended at this year’s event.

Dr. Sameh Iskandar, from New York University and Director of the Ramses II Temple Project in Abydos shared thrilling news of so many significant discoveries at the Abydos site, very close to the famous Seti temple. 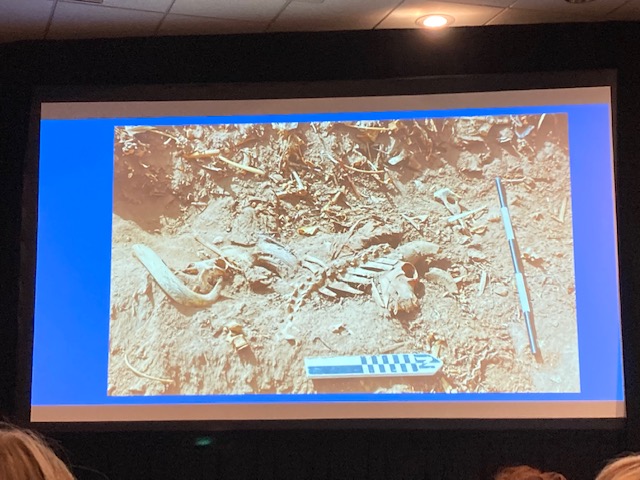 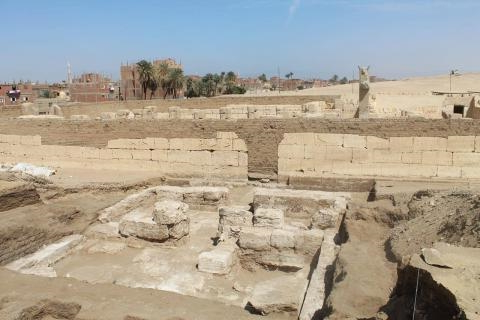 The famous mummy expert Dr. Salima Ikram presented some of her recent years work on KV 63, the Valley of the King’s Tomb discovered, post Tut, by the late Otto Schaden. Dr. Ikram inherited the dig upon his passing a few years ago.  With 6 beautiful coffins, empty but some with beautiful reddish gold, funerary bouquets, jars and statuettes – there are an abundance of artifacts for studies, although much displays termite damage.  Most fascinating are a few pillows stuffed with what seem to be dove feathers and in an amazing state of preservation.

Was this a tomb? Or more likely an embalming cache? She definitely dates it to the late 18th Dynasty – but for whom? It was first thought, based on a jar inscription, that this might be a tomb or cache connected to Ankhesenamun, Tutankhamun’s widow. But Dr. Ikram is no longer sure of that inscription… and is careful not to drop any names. 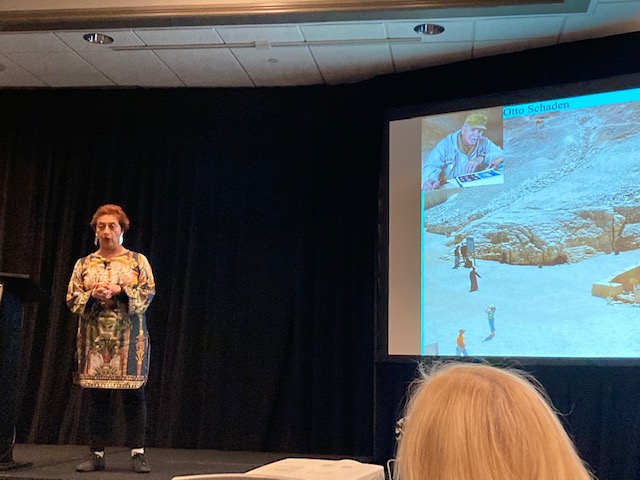 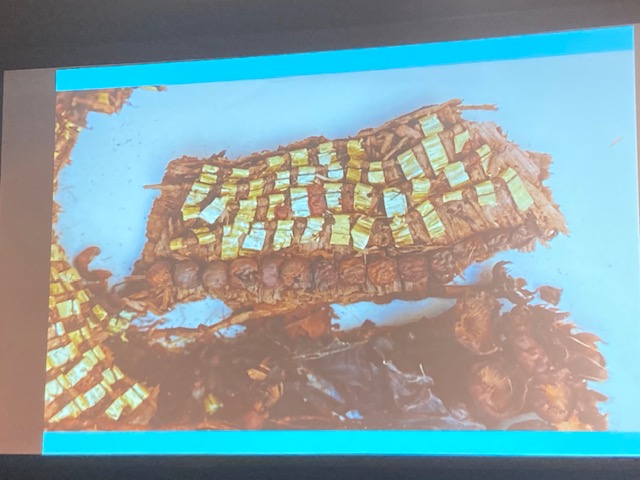 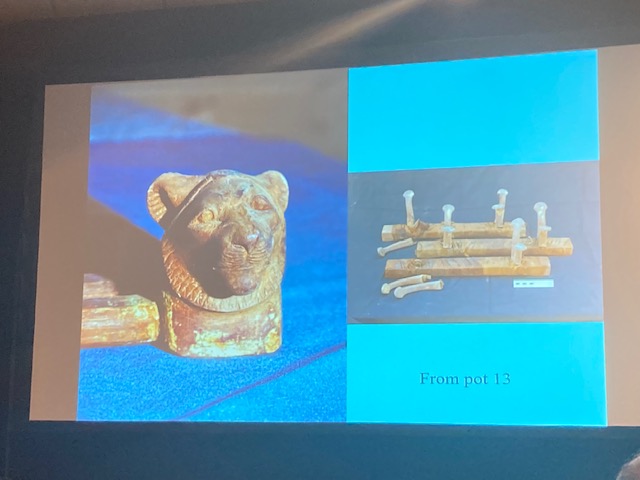 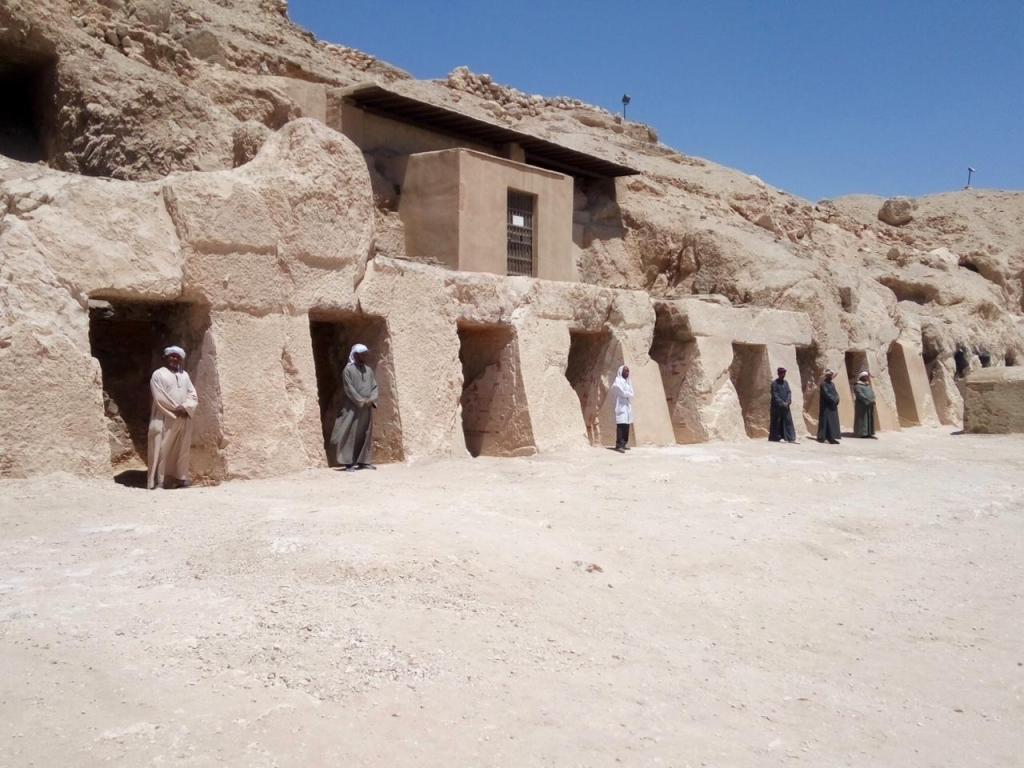 Wow!  Dr. Bahaa Gaber, The director of West Bank excavations for the Ministry of Tourism revealed his amazing new excavation work started 2019 near the famous Valley of the Kings. Dra Abu el Naga is the name of the cemetery associated with the 17th dynasty, the family of ruling Thebans who pre-dated the New Kingdom (ending with Ahmose and Amenhotep I) – before the great line of Thutmosids.

This massive excavation has unearthed 38 Saff tombs, many from the New Kingdom, and notably a massive tomb with 18 entrances (never before has a saff tomb been found with so many!). The owner was a man named Shed Su Djehuty, (meaning “the god Thoth saved me”). With a tomb so grand, the god Thoth seems not just to have saved him. but smiled upon him greatly!

4. Re-opening of the Greco Roman Museum in Alexandria – and Greco-Roman stelae 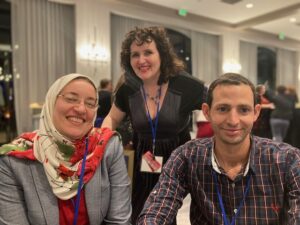 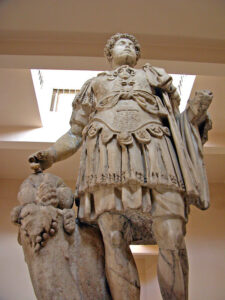 Great news from Alexandria. Dr. Wallaa Moustafa  brought the exciting news that the Greco Roman Museum should be re-opening this year. It has been closed since 2005 and lack of funds have delayed the large renovation/renewal. The museum will unveil some magnificent works including large statues of Marcus Aurelius, Septimius Severus – and the goddess Isis herself.

In her talk, she looked at tomb Stelae comparing Greco-Roman to Egyptian style. Unlike the Egyptians that only depict signs of rejoicing and positive feeling, even in a funerary context, the Greco Romans introduce signs of sadness, and grief following loss. There is also the transition from two-dimensional to three-dimensional perspective when you move from Egyptian to Greco Roman art. 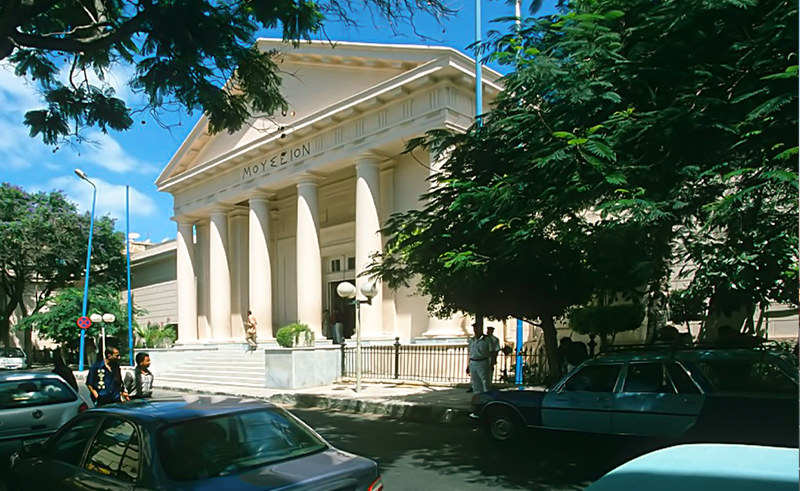 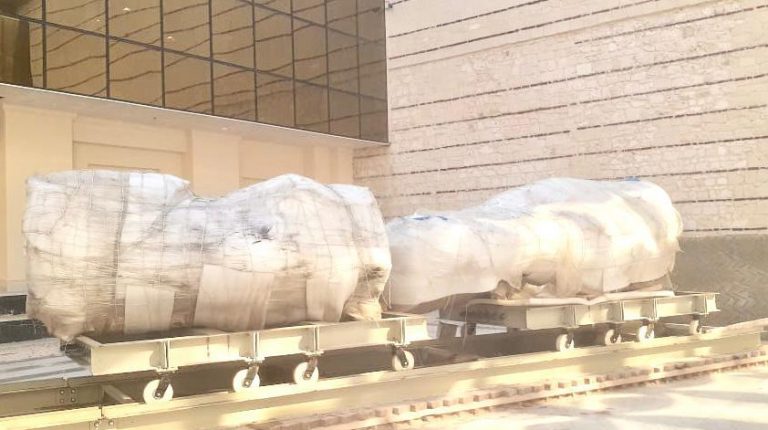 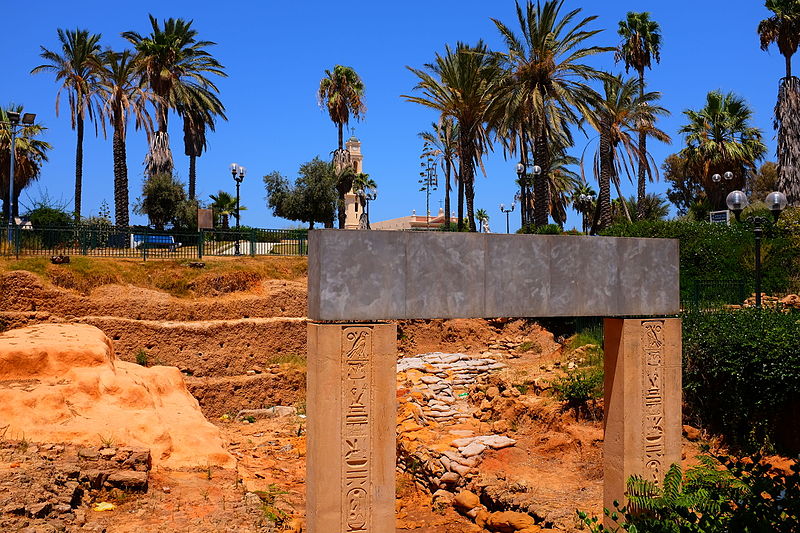 A fascinating presentation by Dr. Jacob Damm of Cortland SUNY on his work in Israel. He presented excavations findings at the site of in old Jaffa (Tel Aviv) where he had been working on a great gate attributed to Ramses II. This gate, he explained, was destroyed by an anti-Egypt insurgency in 1135 BCE. He suggested Egyptian presence may have started after Thutmosis III’s battles at Megiddo in the 15th c BCE. His theory, based on trade goods and marked vessels found in the vicinity, is that this may have been a lively marketplace during Ramesside times.

Even more interesting, is Dr. Damm’s work in Jaffa at a late 18th Dynasty lion temple — possible evidence of an Amenhotep III cult in the land that would become Israel. Sadly, all work has been halted, at least for now, with the site backfilled by the Jaffa port authority.

It seems Egypt and Israel are not the most cooperative friends in many things, including archaeology. 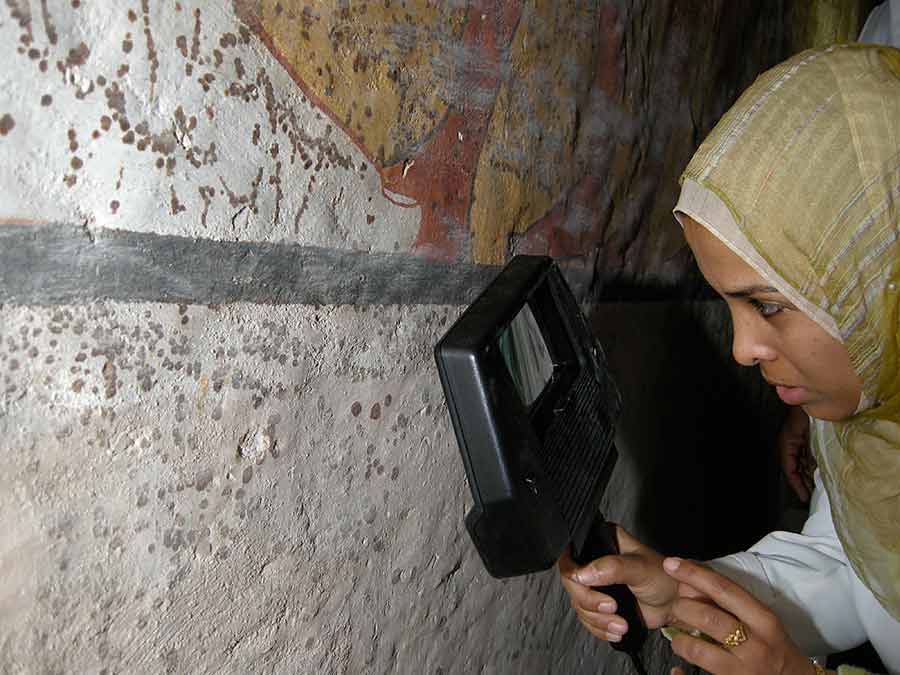 Lorinda Wong of the Getty Conservation institute updated conference goers on the recent decade-long scientific investigation and conservation efforts within Tutankhamun’s tomb (KV62). This took place between 2009 and 2019. An impetus for the project was the projection that in light of current conditions and traffic in the tomb, it could actually disappear altogether within 150 years. Intervention was sorely needed. Interestingly too, they reported the wall painting stratigraphy differed from wall to wall.

An investigation into the famous “microbial growth” brown spots on the painted walls of the burial showed they were entirely “dead” – no growth or health risk. In fact no change could be perceived at all since the 1920s. Improvements have been made to the aging tomb infrastructure including the replacement and upgrading of visitor walkways, and the addition of protective barriers, lighting, ventilation, and new signage. Tourist numbers in the tomb will also be carefully controlled

Good to know the tomb now has a longer lease on life – and may now be enjoyed for centuries, if not for millions and millions of years. 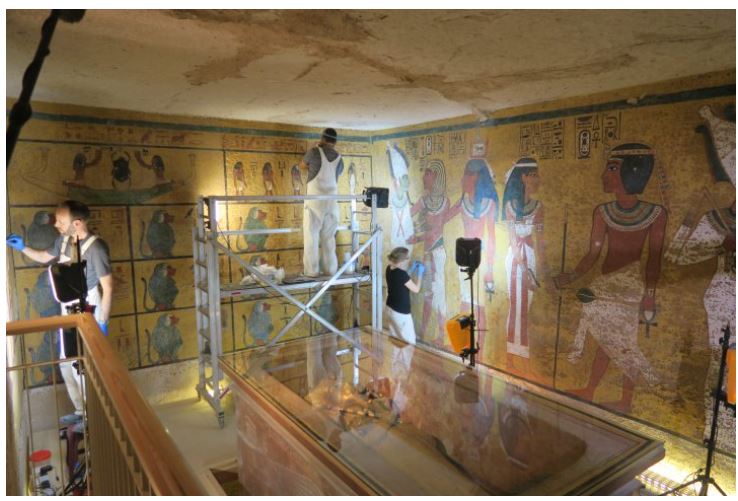 7. Heart scarabs: New insights on multiple hearts and their meaning 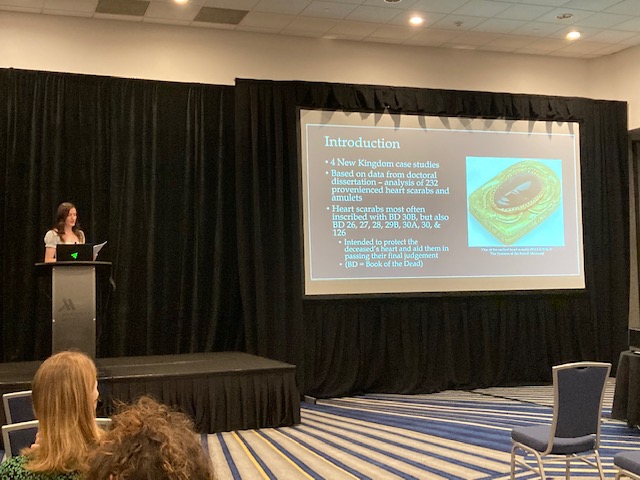 Not an opening or a new archaeological discovery, but a coherent research-based presentation by a peer of mine from Egyptology studies at University of Toronto. Erin Ingram, now a PHD candidate, looked into the use of heart scarabs in tombs. Generally these are placed over the heart (which remains in the mummified body) with special prayers beseeching the heart not to betray the deceased at the time of judgement: ”Do not stand against me as witness”

The reasons? Added security in numbers was one possibility. Scarabs as “Gifts from family” to the deceased was another. And most interestingly of Erin’s suggestions:  a sense of deep guilt at death? This brings to mind a question: what possible guilty deeds did Tuya, (the mother of great Queen Tiye), harbour in her heart …before she drew her final breath? 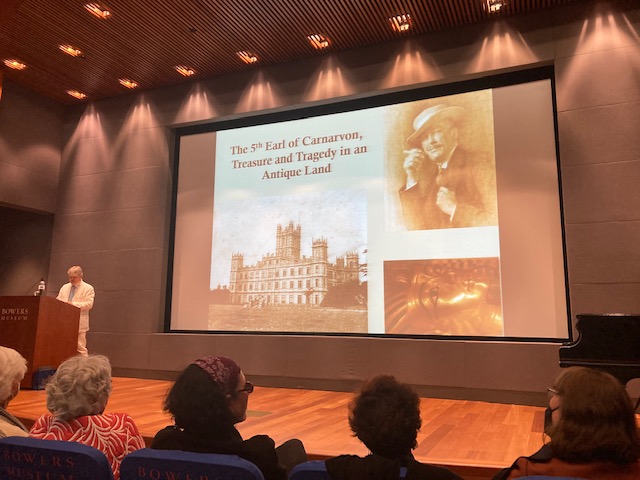 The speaker was no other than Lord George Herbert Carnarvon the 8th(Geordie to his friends) , a man I found to be utterly charming, somewhat shy, and surprisingly approachable. I chatted with him at the reception and had the great honour of being seated next to him at dinner.

In his touching tribute presentation, he shared rare photos of Lord Carnarvon V as a youth. He spoke about his great grandfather’s adventuresome side – always looking for the next exciting challenge. He was certainly no passive archaeology financier. It was clear how much he loved archaeology – and the special chemistry he had with Howard Carter.

Lord George also discussed briefly the private Egyptian collection at Highclere castle, lost for a time. More than 300 ancient Egyptian artifacts, some from the legendary tomb of Tutankhamun, were discovered in a sealed compartment in 1988. The current Lord (George the VIII’s father) was led to it by a retired Butler. This is largely a collection of objects found by this great grandfather in the excavation years before Tutankhamun. It also includes beautiful replicas of objects from the tomb.

Lord George personally told me his grandfather had been quite superstitious about these items having witnessed the premature death of his father. For this reason, he had closed all the artifacts away. He said his great Aunt Evelyn who was there when the tomb was first opened hadn’t actually seen the mask until the 70s. (She too had been upset about Carnarvon’s sudden death and kept away from the treasures).

In recent years Highclere, still the home of the Carnarvons, has been famously the set for Downtown Abbey. Lord Carnarvon, in fact, gave up part of his home to the cast and crew of Downtown during those years of filming. I asked him who he particularly liked from the cast of Downtown, and he quickly replied “the cook”, but then mentioned many of the other marvelous actors. Carson the butler, apparently, was very similar to the butler(s) he has known.

Today, he still opens his beautiful castle to visitors at certain seasons of the year. And yes, you can come, tour – and even can glimpse the Carnarvon collection of Egyptian treasures. His wife lady Fiona is an avid writer and blogger on all things Highclere.

This wonderful Lord was so approachable and friendly. Highclere gin was the drink of choice at his welcome reception – and it was fine gin indeed. How fortunate we were, in this year of Tutankhamun, to raise a toast to the centennial of the discovery with this fine Lord – someone intimately connected to such a glorious period of Egyptian archaeology! 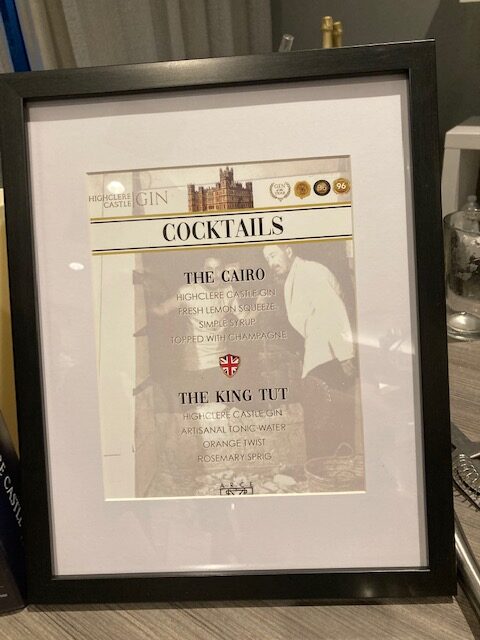 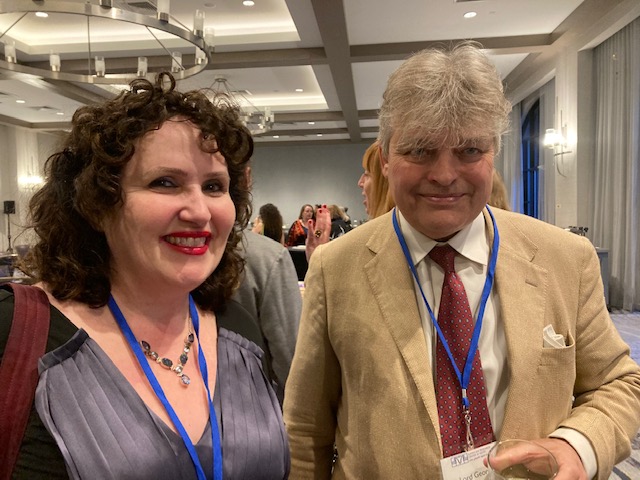