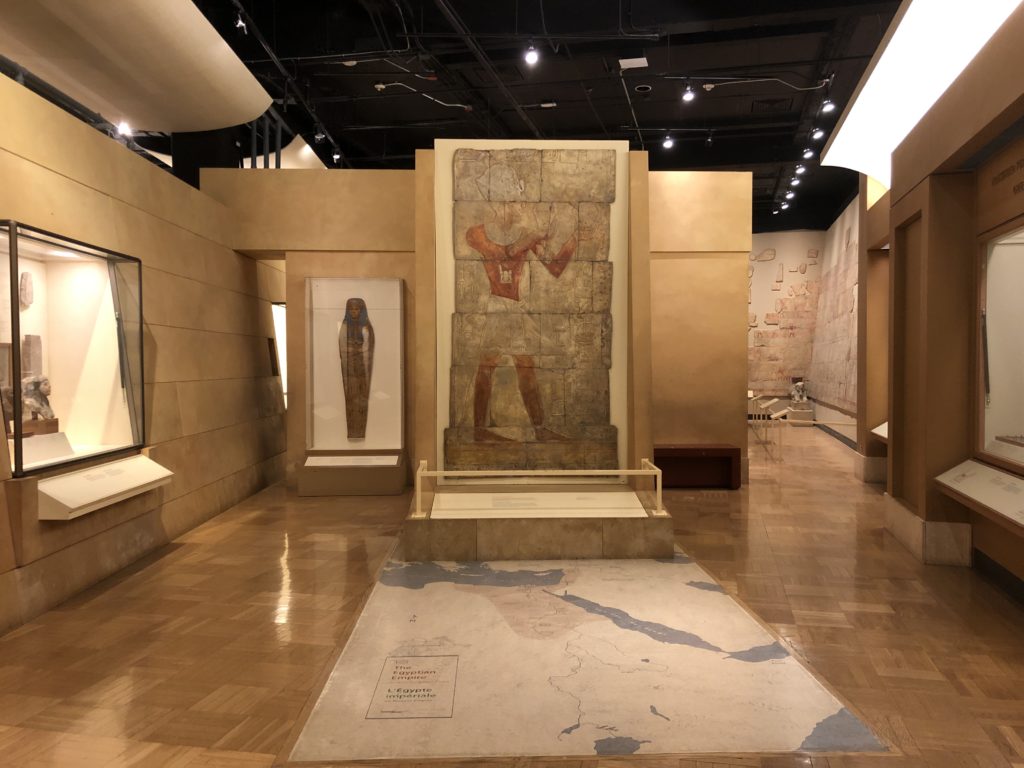 I have always been fascinated by the mysterious ancient Egyptian culture. Since becoming the Marketing Assistant of Ancient Egypt Alive, I have been eager to learn more about the history and culture of this ancient civilization. So, I sought out ancient Egyptian antiquities close to where I currently live.

Right here in Toronto, there is a collection of Egyptian artifacts on the third floor of the Royal Ontario Museum. It was gathered by Charles Trick Currelly, an early Canadian archaeologist and the founder of ROM. This collection was the foundational collection of the original museum which opened in 1914.

Here are some of the great Egyptian artifacts at the ROM today that caught my eyes!

1. Coffin and Mummy of the Lady Djedmaatesankh 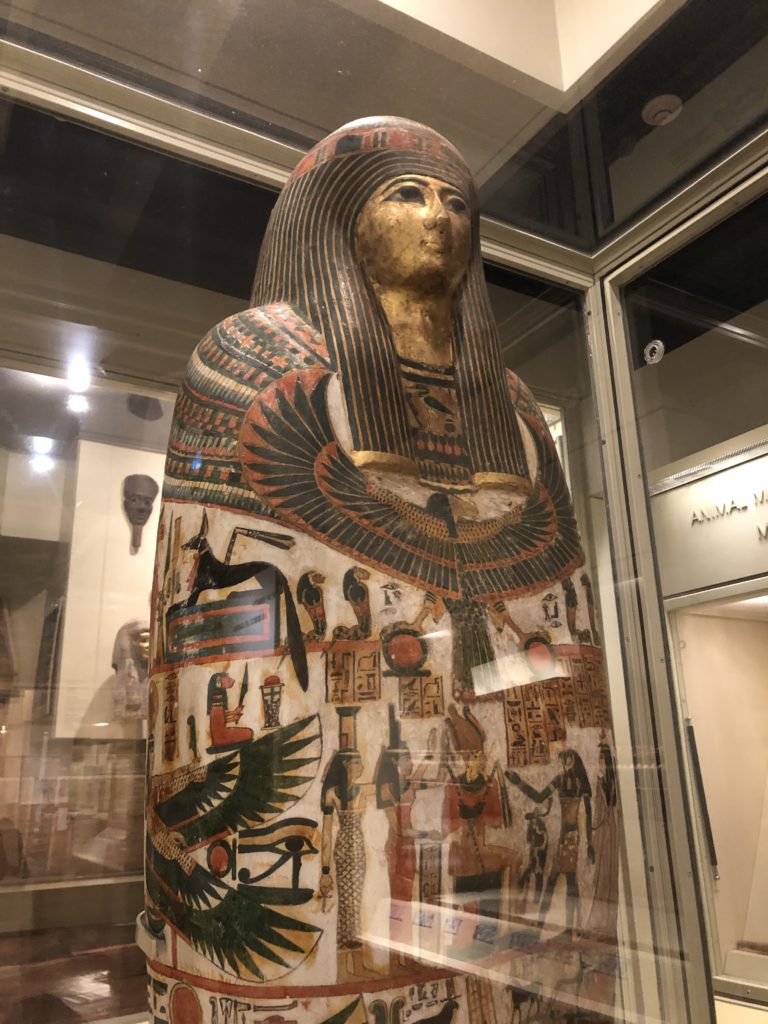 Djedmaatesankh was a musician of the temple of Amun-Re at Thebes (modern Luxor) of the 22nd Dynasty, 3rd Intermediate Period. The coffin was collected and brought to the Museum by Charles Currelly in the early 20th century.

The coffin provided visual references to the Book of the Dead emphasizing the re-birth of the deceased through the protective image of the Sun god as a ram-headed falcon. Djedmaatesankh was also presented to the god Osiris, an initiation into the Afterlife.

This mummy case has never been opened. A full-body CT scan in 1994 not only revealed Djedmaatesankh’s glorious amulets, but also the cause of death – a massive infection of a dental cyst in her upper left jaw burst and poisoned her. 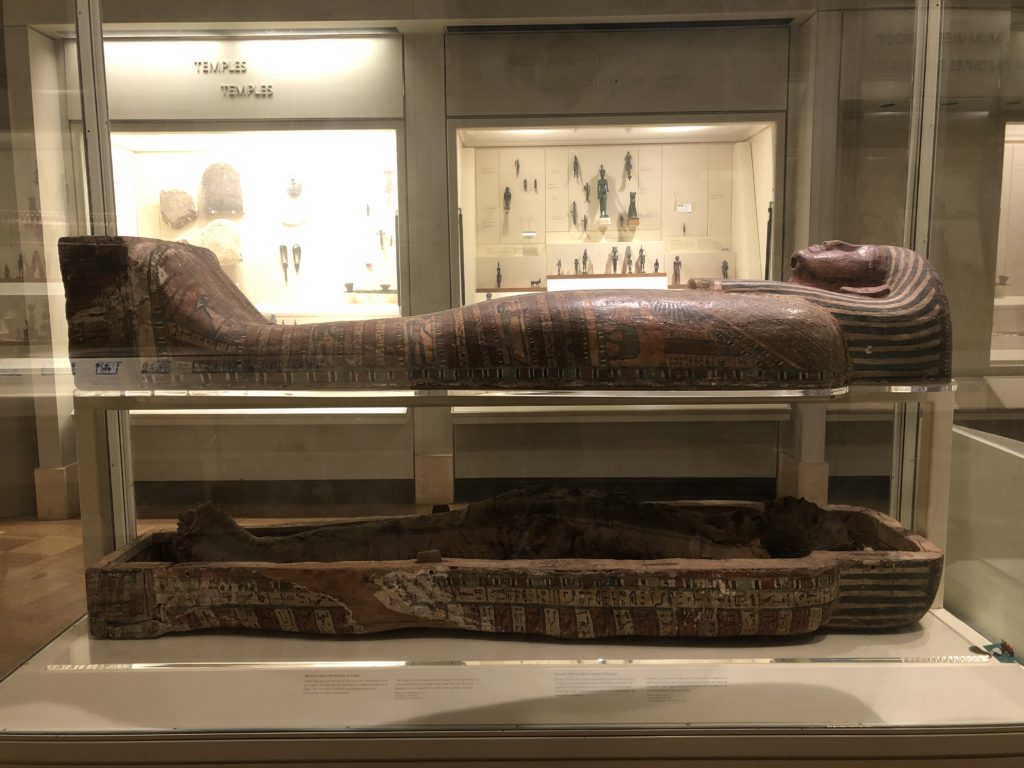 This 155 cm mummified ancient Egyptian man was purchased in Luxor, Egypt in 1859 and brought to Canada by the Rev. Lachlan Taylor.

Antjau might be a wealthy landlord or trader from the Early 26th (Saite) Dynasty, Late Period. Until the glyphs on his coffin were read by Winifred Needler, he was known as “The Princess” because of his red hair!

The inside of the lid was painted with sky goddess Nut, who protectively spread her arms over Antjau’s body. Her winged form also appeared on the outer surface of the lid. 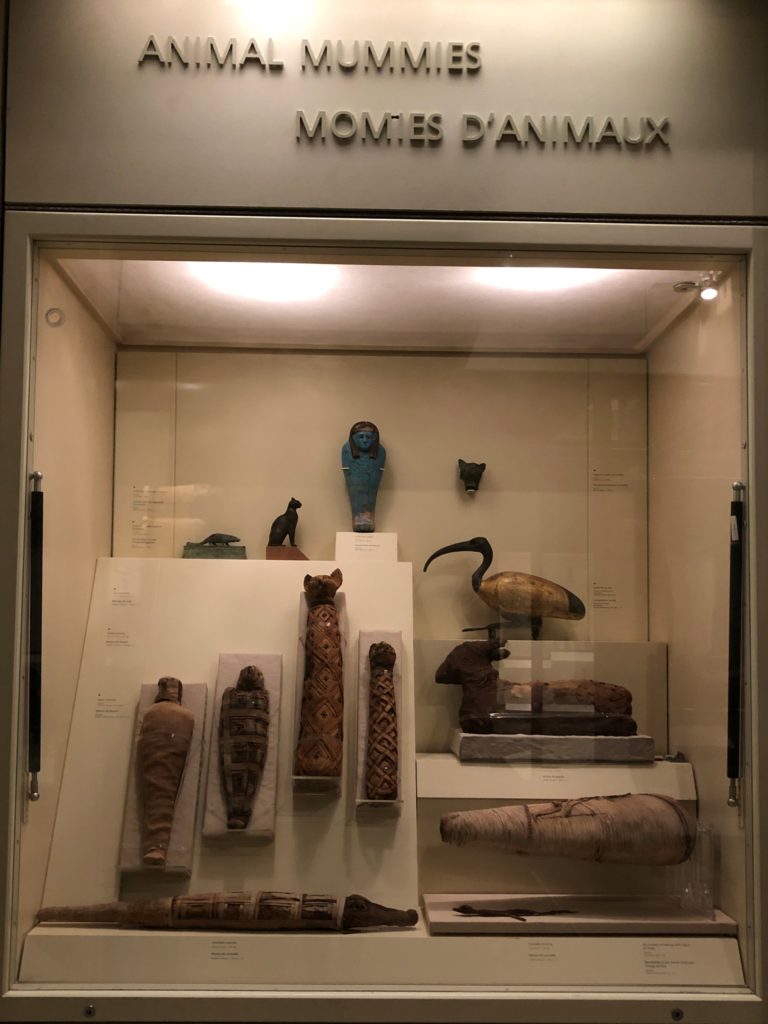 The importance of some animal species in ancient Egyptian culture could be represented by many artifacts.

During the later periods of Ancient Egypt, certain animals were mummified and given solemn burial out of respect for the gods they represented. Some of them became protected species, such as cats, ibis and hawks. It was considered a pious act to pay the burial costs of sacred animals.

Among all animal mummies, the crocodile mummy stood out to me. I cannot believe Ancient Egyptian mummified such fierce animals! Most mummified crocodiles were killed when young. They were mummified and offered as votives to the powerful crocodile god, Sobek. 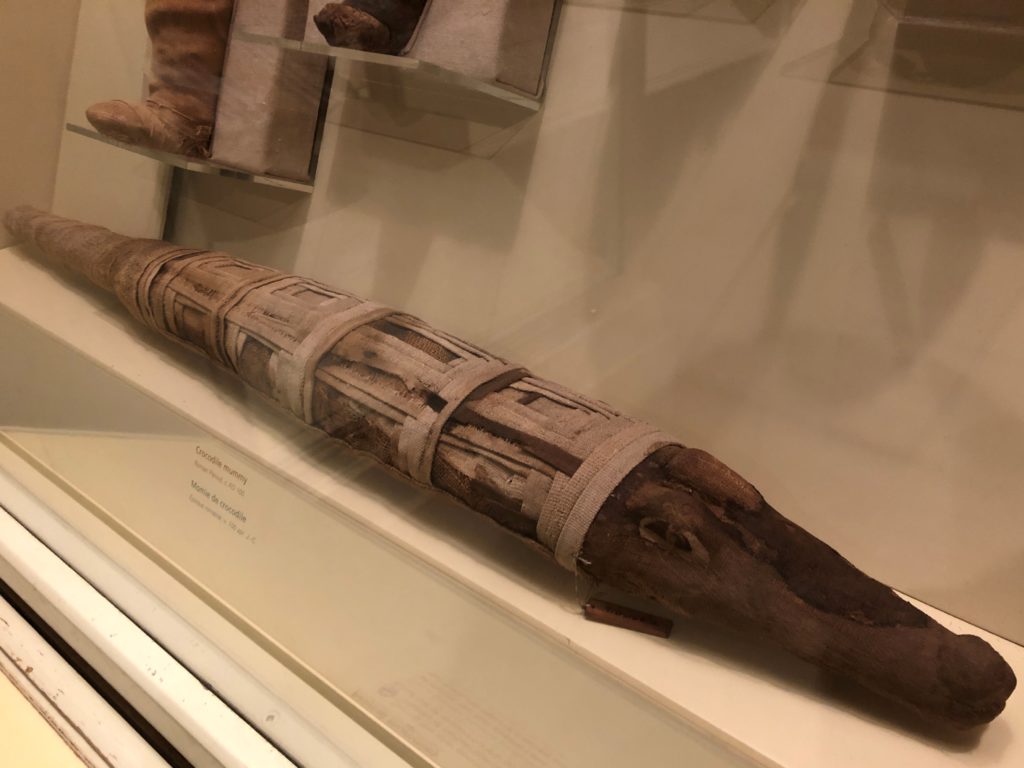 4. Relief Fragments from the Mortuary Temple of Mentuhotep II 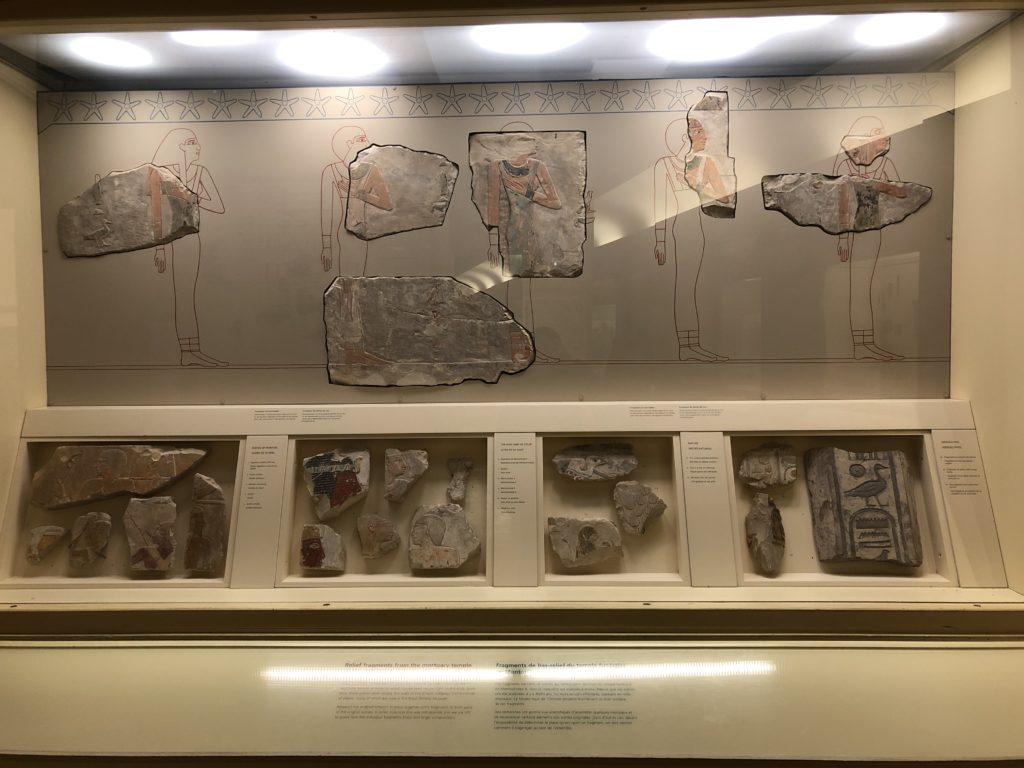 These fragments formed part of scenes that covered the walls in Mentuhotep ll’s mortuary temple at Deir el-Bahri. The walls collapsed into hundreds of pieces in the 4000 years since they were carved, many fragment pieces were brought to the ROM by Charles Currelly between 1906 and 1908.

Researchers helped piece together some fragments to form parts of the original scenes. The rest was left for us to guess how the individual fragments fitted into larger compositions. With the fragments, I can imagine how gorgeous the temple was in the 11th Dynasty! 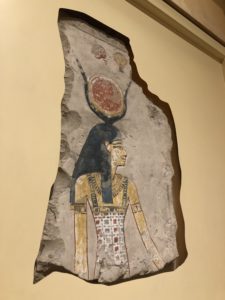 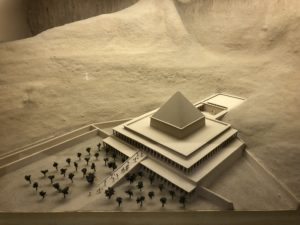 5. Game Board for Senet 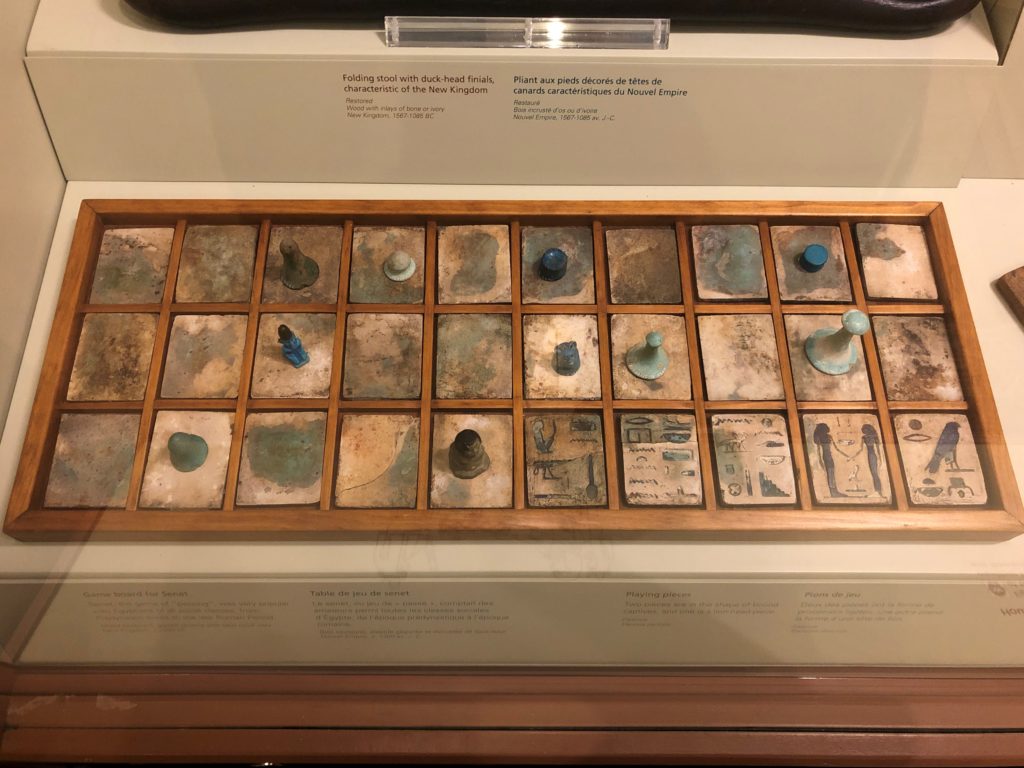 Senet, the game of passing, is one of the earliest known board games throughout history. It was the most popular board game in Ancient Egypt among all social classes from Predynastic times to the late Roman Period.

The detailed original game rules have not survived, but it is believed that it was a game for two, kind of like the modern game of chess. I would love to try the board game that was beloved by Tutankhamun!

The Egyptian collection gathered by Charles Currelly is just not a showcase of enormous colossi or solid gold treasures like the Louvre or the Met in New York. It is, however, an impressive collection of artifacts that show us how the ancients lived, worked and played – and an important source of information to let us learn about ancient Egyptian civilization.