Some Hidden Delights of Cairo

Two wonderful secrets from my many visits

I love Cairo. It invigorates me. It awakens all my senses – the blast of car horns and Muezzin’s call to prayer over tinny loudspeakers. The soaring, spiraling 10,000 and more minarets that pierce the sooty sky. The diesel fumes, apple shisha, and hot oil from shawarma stands. I have walked its chaotic, colourful streets during more than a dozen visits… and this 1500 year city never gets old.

Cairo, for the novice, has very little to do with Ancient Egypt. Its foundations were in the Islamic settlement of Fustat in 641 CE. According to legend, this location was chosen by a bird: A dove laid an egg in the tent of ‘Amr ibn al-‘As (585–664), the Muslim conqueror of Egypt, just before he was to march against Alexandria in 641. His camp at that time was just north of the Roman fortress of Babylon in the area of today’s Old Cairo – a much better strategic location to control the country The development of this first capital – Fustat– was the beginning of Cairo as we know it. 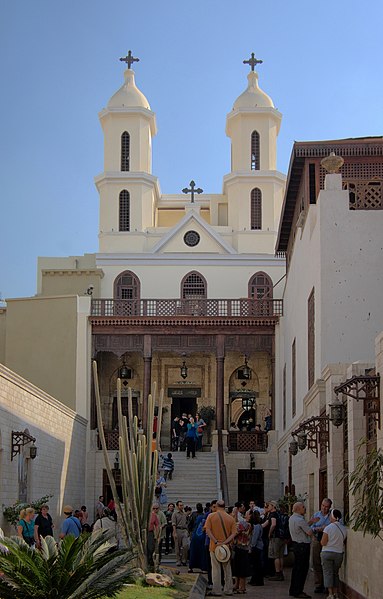 Fustat: Area of the hanging church, ancient Jewish genizah – and new home of the mummies.

Today, you visit the area of Fustat when you tour the wonderful Hanging Church, the Ben Ezra synagogue (site of the oldest genizah, repository of Jewish writings from Egypt from the late 800s) and the church of St. Sergius with its famous crypt (where it is thought the holy family rested for a time). Today Fustat is a fascinating area being rejuvenated since the full opening of the National Museum of Egyptian Civilization (NMEC) in 2021, as most notably, the new home for the Royal Mummies).

I admit my favourite site in Cairo will always remain the Egyptian museum. That venerable pink building across from Tahrir square will continue to hold some of the greatest treasures of Egypt  – even after the opening of the Grand Egyptian Museum at Giza. There is no shifting that colossal statue of Amenhotep III and Queen Tiye.

To sort out all the different museums in the Cairo area and what they hold. Read our previous Museums blog.

Aside from museums, what can I tell you about Cairo’s most interesting areas? I have chosen a few of my favourite (there are really so many), some less traveled areas to inspire your next visit. Or armchair travel with me there now: 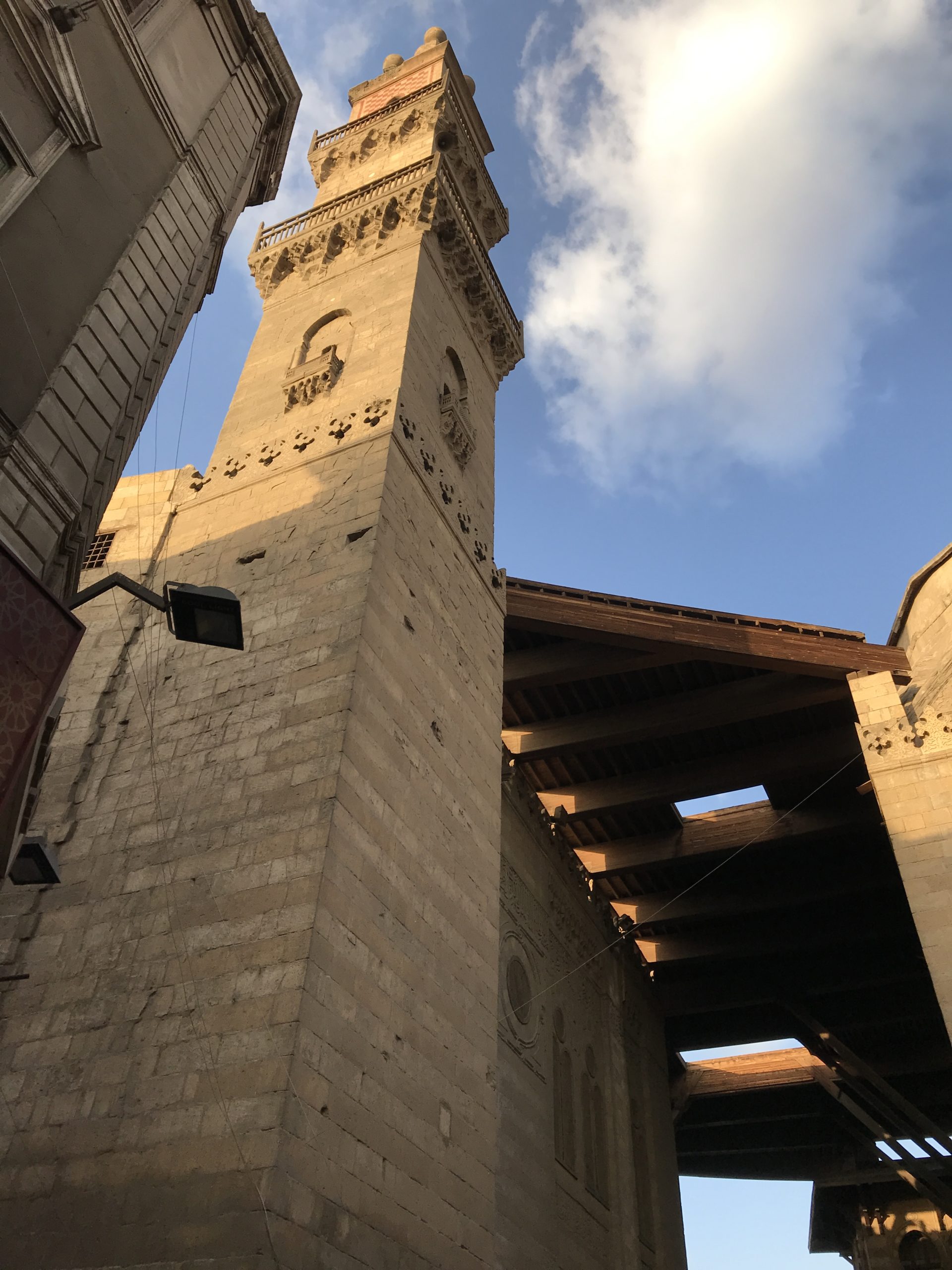 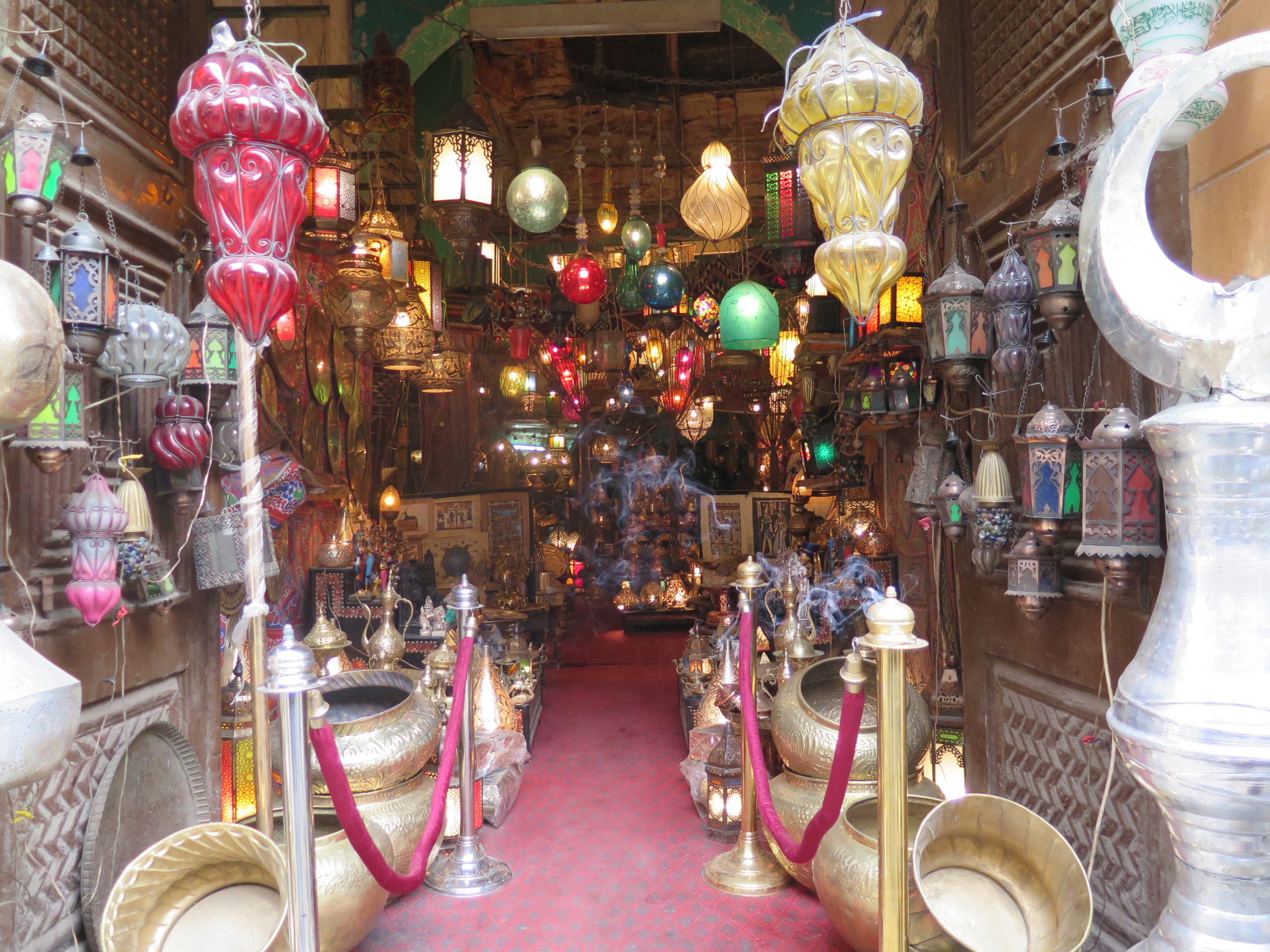 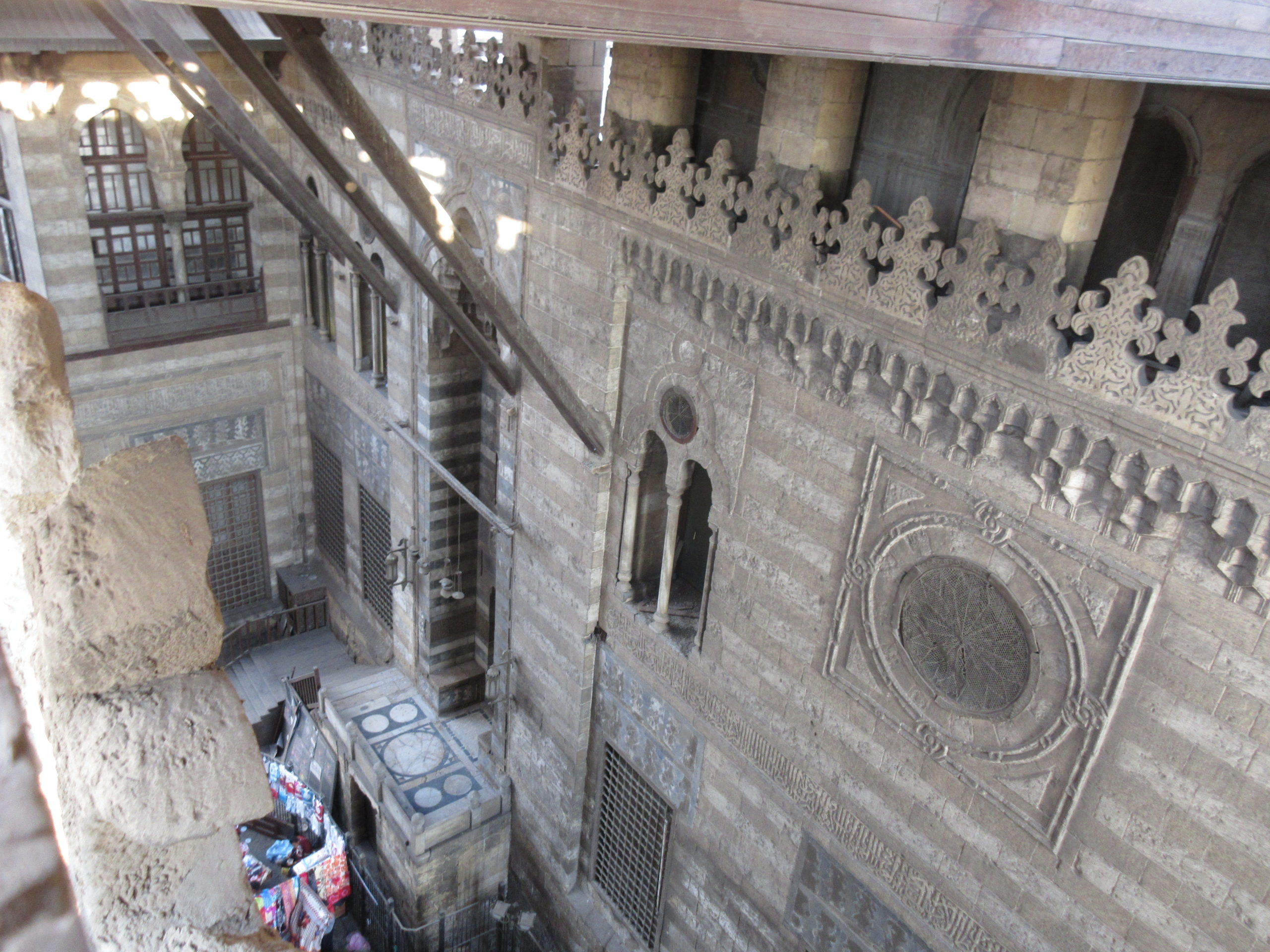 When the Fatimids (an Ismaili Shi’i dynasty) took control of Egypt from the Abbasids in 969 AD they found they had inherited a poor country where high taxes and shoddy governance prevailed.

The Fatimid’s new caliph Al-Muizz (The ‘Sisi’ of his day) began an extensive building project, repairing roads, restoring the canal system on which agriculture in the Nile Valley depended, and constructing a new capital, Al-Qahira.

Part of his legacy is a wonderful 1 km route named in his honour – from Bab el Futuh in the North to Bab Zuweyla in the south, gates built by Salah al din in the 12th c)  through the centre of medieval Cairo today. El Muizz street has been a pedestrian route since 2008- and is a feast for the eyes. In fact, a United Nations study discovered that the street hosts the greatest collection of medieval architectural treasures in the entire Islamic world.

The northern part begins at the great northern of the street extends from Al-Hakim Mosque in the north to the Spice Market and through the antiques markets section. Here you will find Al-Aqmar Mosque(one of the few extant Fatimid mosques), the Qalawun complex, and several well-preserved medieval mansions and palaces.

The southern part extends from the Ghuriya complex to Bab Zuweila and includes the ancient Tent Market where the great, great-grandchildren of ancient textile makers still sell their beautiful handcrafted cloth. Watch our short video VLOG where I provide a glimpse of El Muizz street. 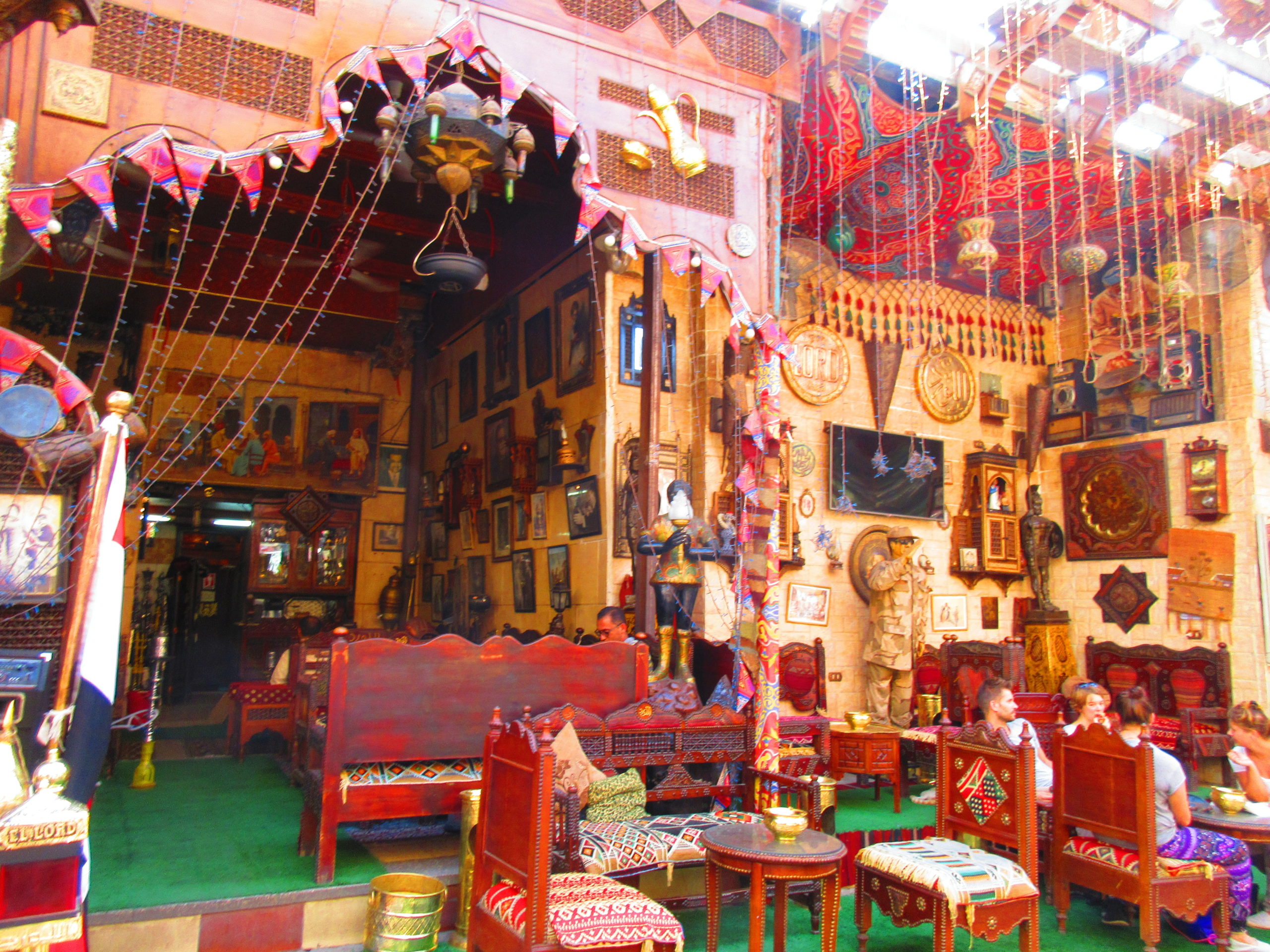 Adventure tip: Climb onto the gates at Bab Zuweyla – and even up the minaret for stunning views of the medieval city. It was here that the last Mamluk sultan was executed in 1517 by the Selim the Grim (the Ottoman sultan) – was hung on these gates! 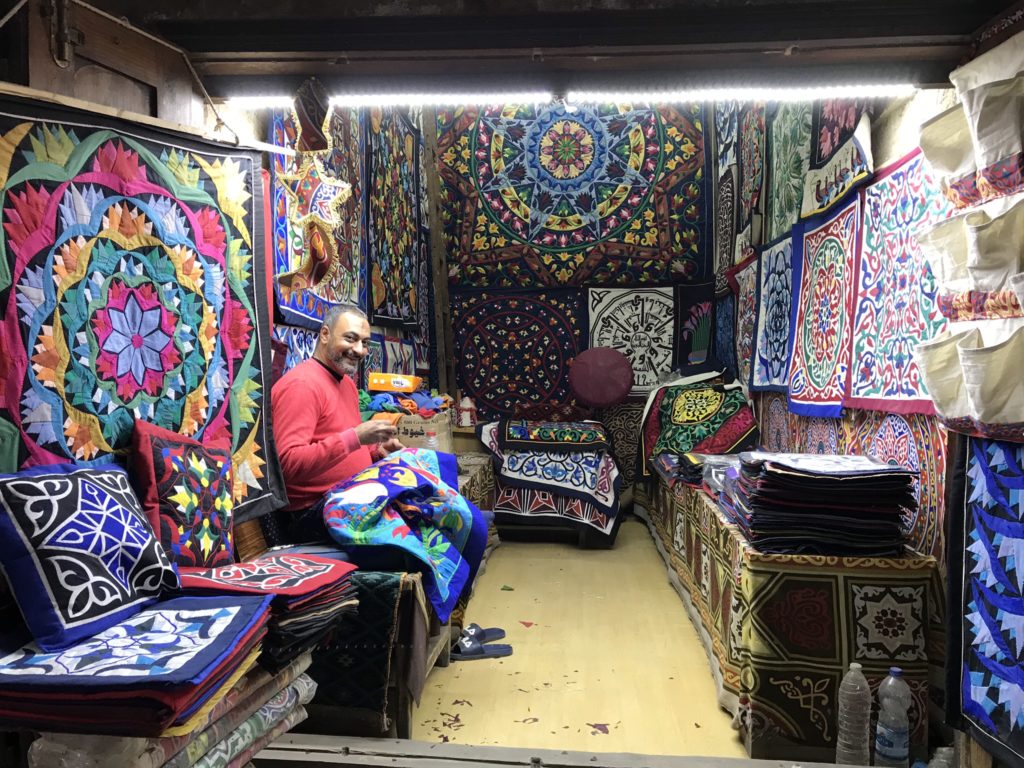 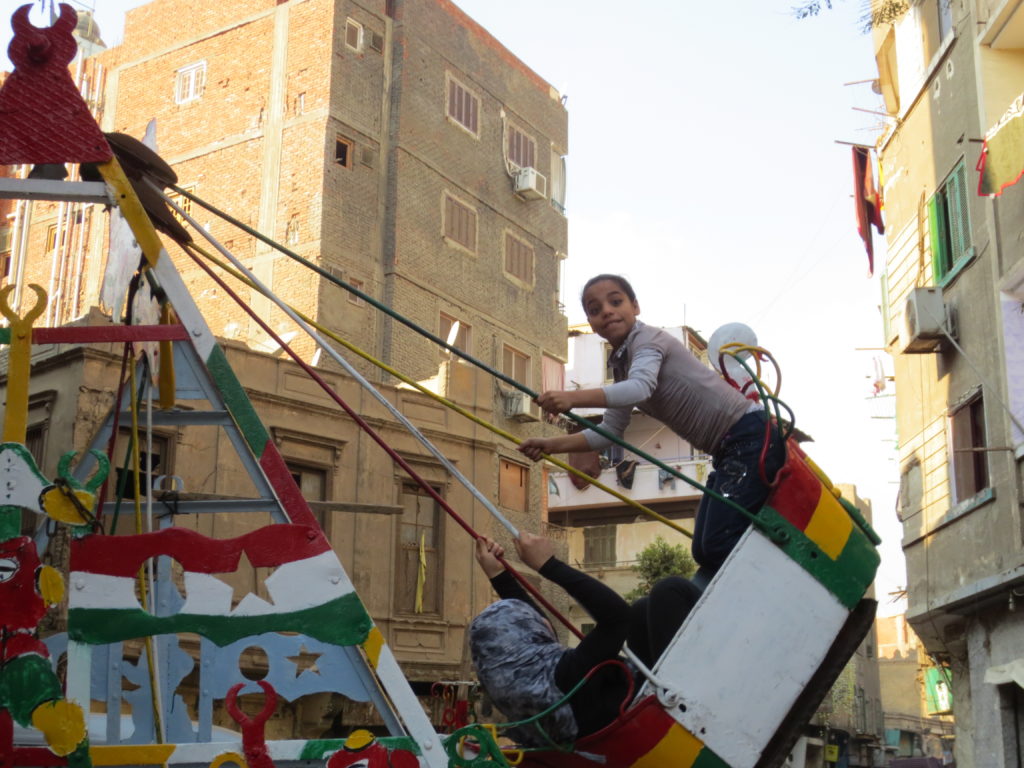 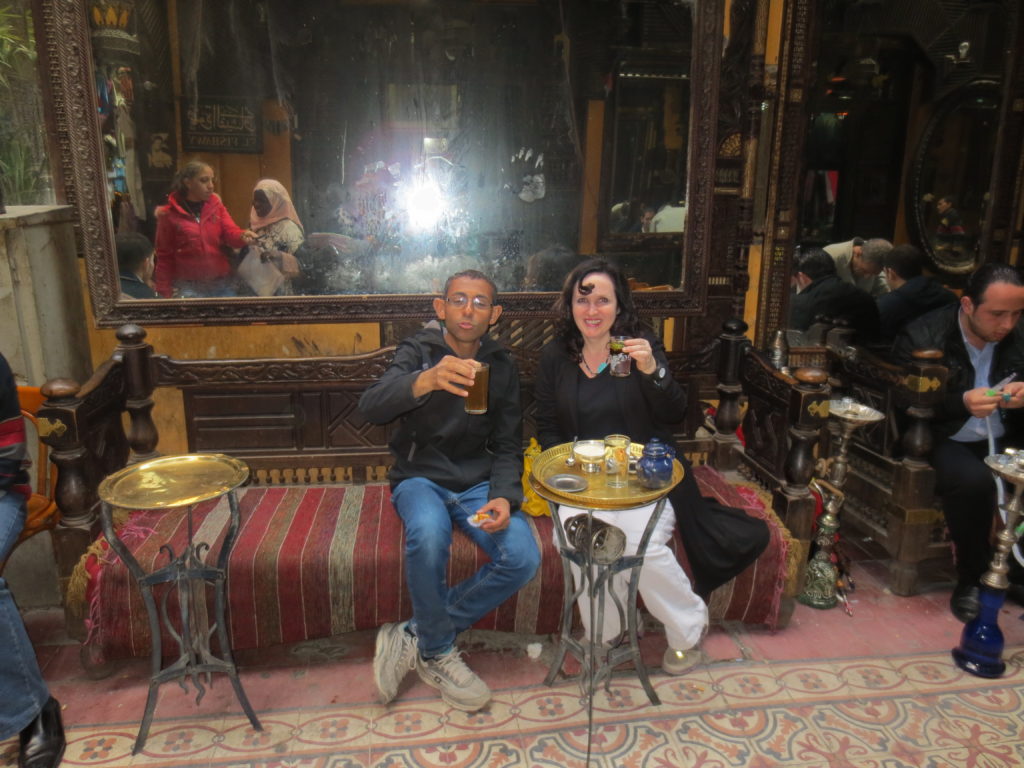 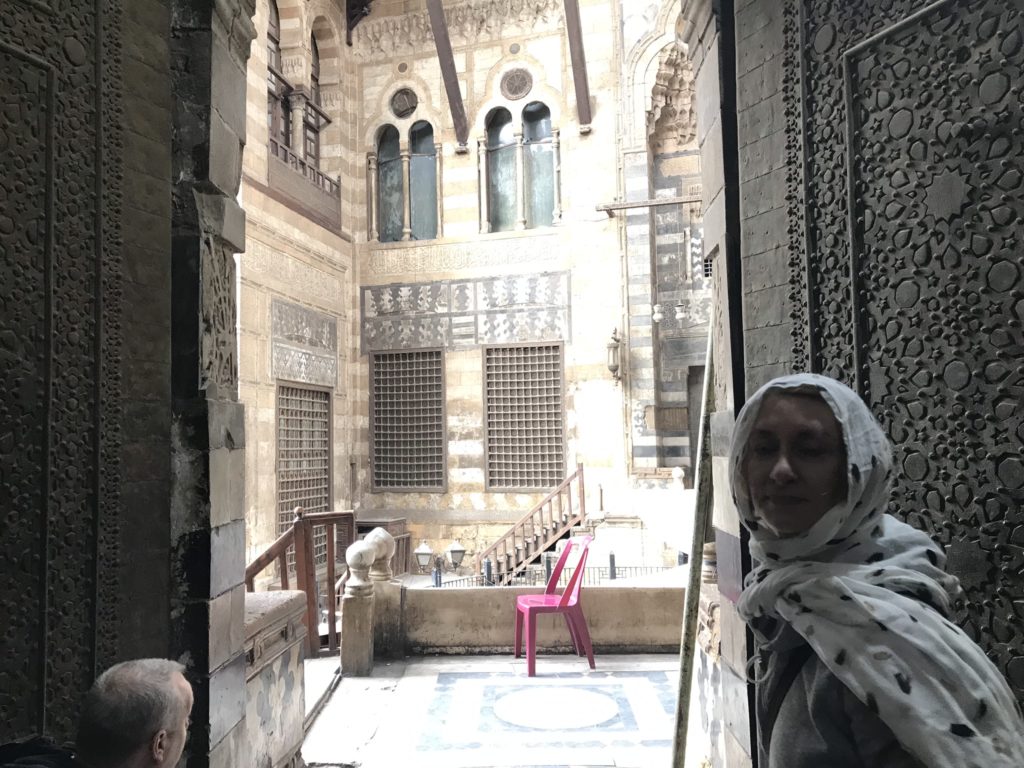 Ibn Tulun is Cairo’s oldest surviving mosque – and a lesser-visited architectural masterpiece that I love bringing groups to visit early in any of our Egypt tours.

It was built by a slave-soldier who rebelled and founded a new dynasty – the short-lived Tulunid dynasty. It is said he built a vast golden city within a city here – about 2 kilometres from Fustat – complete with pleasure gardens and magnificent lakes. All that remains today is this enormous and stunning mosque, topped with a rare spiral minaret that rivalled the minaret in the Abbasid capital of Samarra (present day Iraq).

Ibn Tulun is a simple, elegant place. No ostentation or lavish ornamentation. Quiet. So very spiritual. Its magnificence resides in space and air – graceful geometric arches that cast shadows on a wide open courtyard. In a city of clamour, crowds and chaos – this is a coveted haven of spacious serenity. 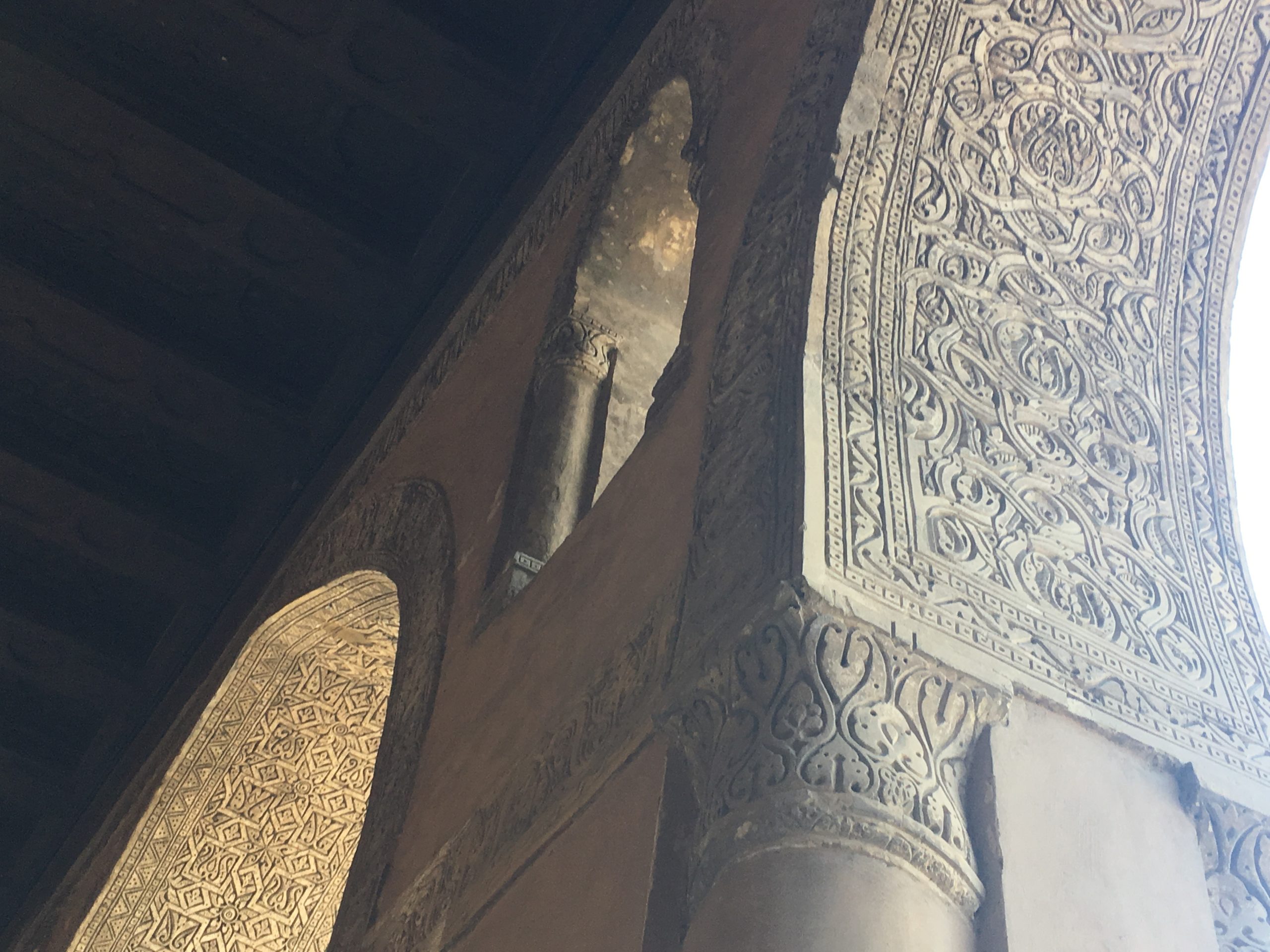 One of the most wonderful features is Ibn Tulun mosque’s famous brick minaret with its external spiral ramp. Legend says you can actually climb up on a horse. I have not tried that – yet- but despite my height phobia have made it to the top. In fact all ages of our travelers managed to take the wonderful journey up that spiral staircase where we were all rewarded with the most stunning views of the city!

I particularly love the fact that all along the exterior leading to the brick minaret you see an architectural feature that is at first perplexing. Could this be a representation in stone of many people with joined arms in unity and friendship? Indeed it is! 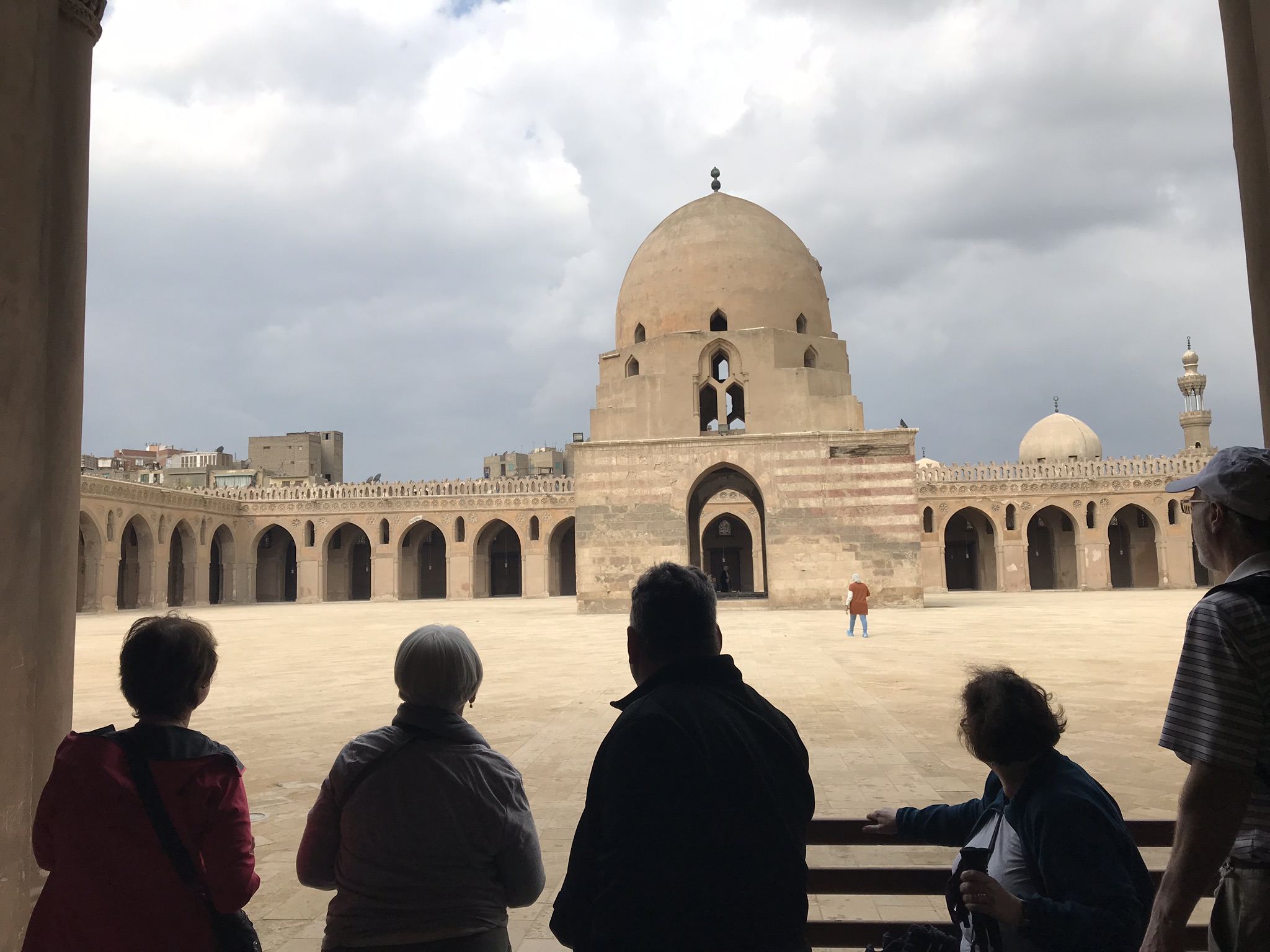