Lifting the Lid on the Late Period Mummy Finds

Who were these dead Egyptians? And why were they buried at Saqqara Egypt?

Yet another massive cache of breathtaking ancient treasures was revealed from under the sands of Egypt… this January at the vast Egyptian necropolis of Saqqara (30 kms from Cairo, 15 kms from the Giza pyramids).

More than 50 sarcophagi and wooden coffins with brightly painted scenes and intact mummies were found down 22 burial shafts at depths of 10 meters to 12 meters (about 32 feet to 39 feet). Not to mention statues, stelae, toys, wooden boats, funerary masks, a five-metre papyrus with the 17th chapter of the Book of the Dead, a bronze axe – and a rare limestone sarcophagus – all dating as far back as the late New Kingdom (1539-1077 BCE). 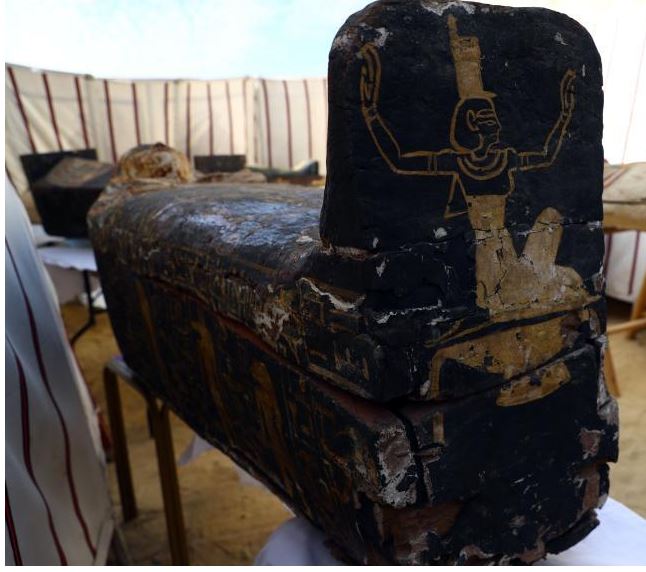 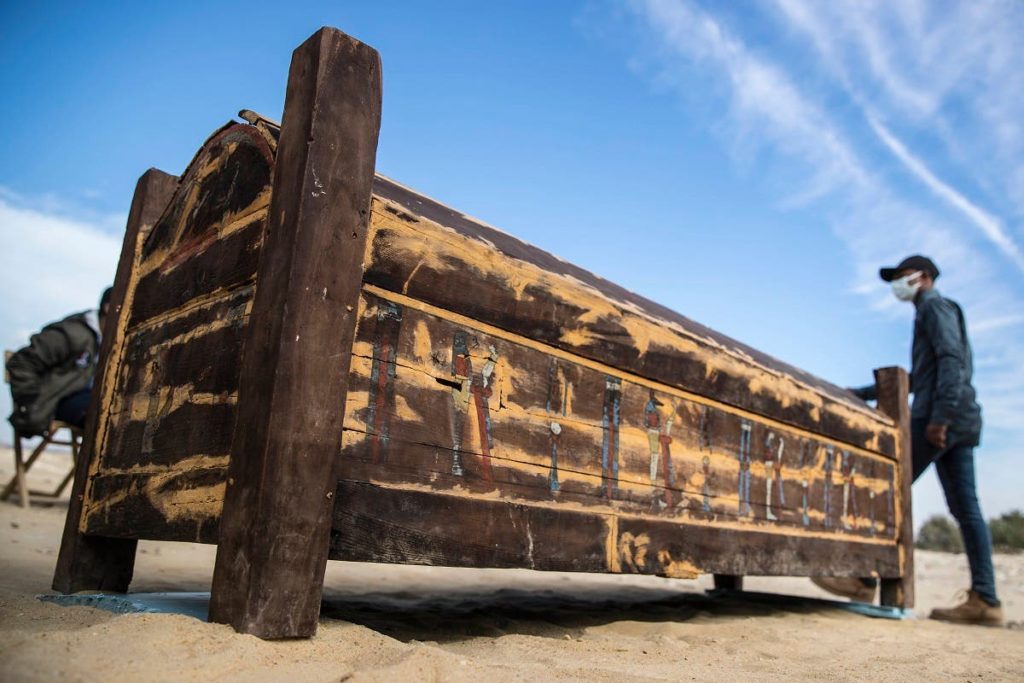 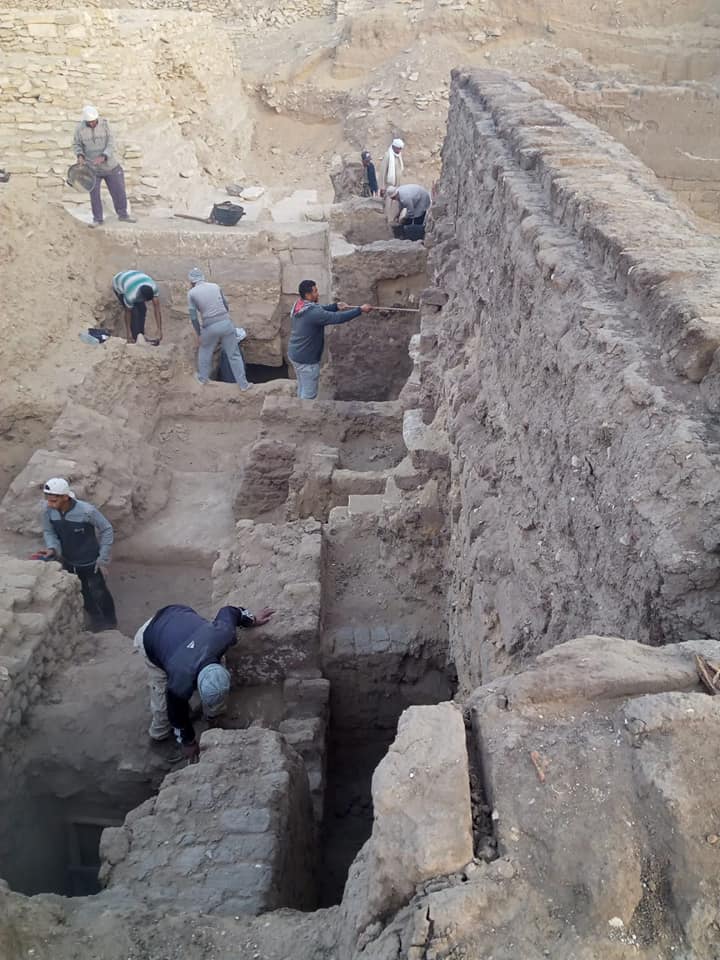 An Old Kingdom Queen Gets a Name

They were found near an even more ancient Old Kingdom structure: the “funerary temple of Queen Naert, (Neit, Naerit or Narat) the wife of King Teti,” first king of the Sixth Dynasty (2323 B.C. till 2150 B.C.) who was assassinated. Although a Queen’s pyramid had been found near Teti more than a decade ago, only now has Dr. Hawass and team found the actual name of the queen – “Naert” in her newly discovered pyramid temple. How wonderful a lost Old Kingdom Queen of Teti has regained her name. 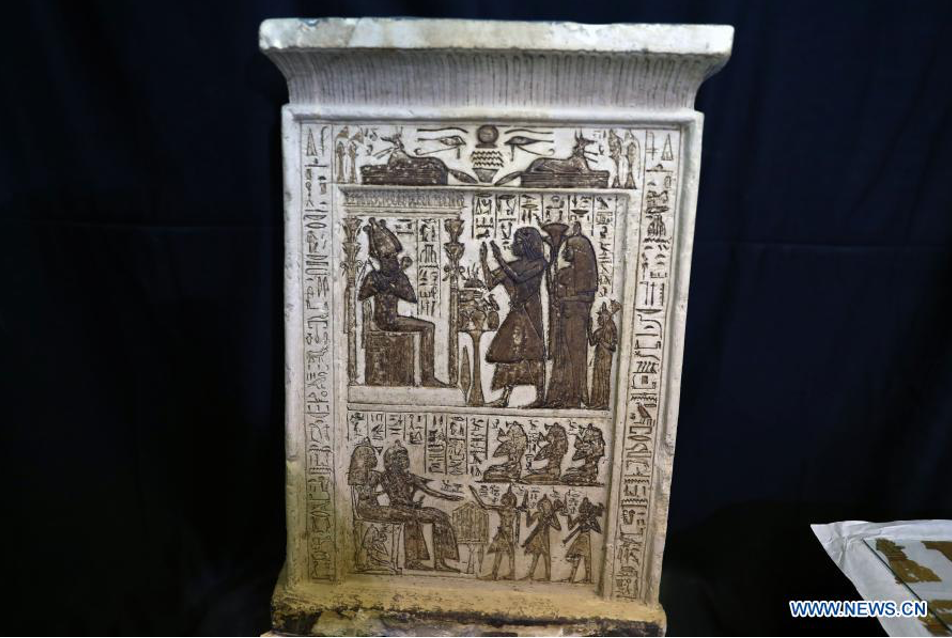 Hawass and experts explains this about the burial cache near Naert: no doubt these New Kingdom priests and individuals were worshippers of the cult of Teti – who lived a full 1000 years after the great Old Kingdom king ruled.

Our modern equivalent would be finding a living cult worshipping William the Conqueror (1066) still active today!

As if this giant trove wasn’t enough to overflow the Egyptian museums for the next decade, two other huge Saqqara discoveries were made last fall : 59 intact coffins in September, and another 100 in October found at the bottom of three vast 12-30 meter shafts. – in another area close to the Unas pyramid. Other finds from these shaft burials included funerary masks, shawabti figurines and more then 40 statues of the funerary deity Ptah-Sokar, all dating a little to what they call the late period. That is: mainly Saite 26th dynasty. 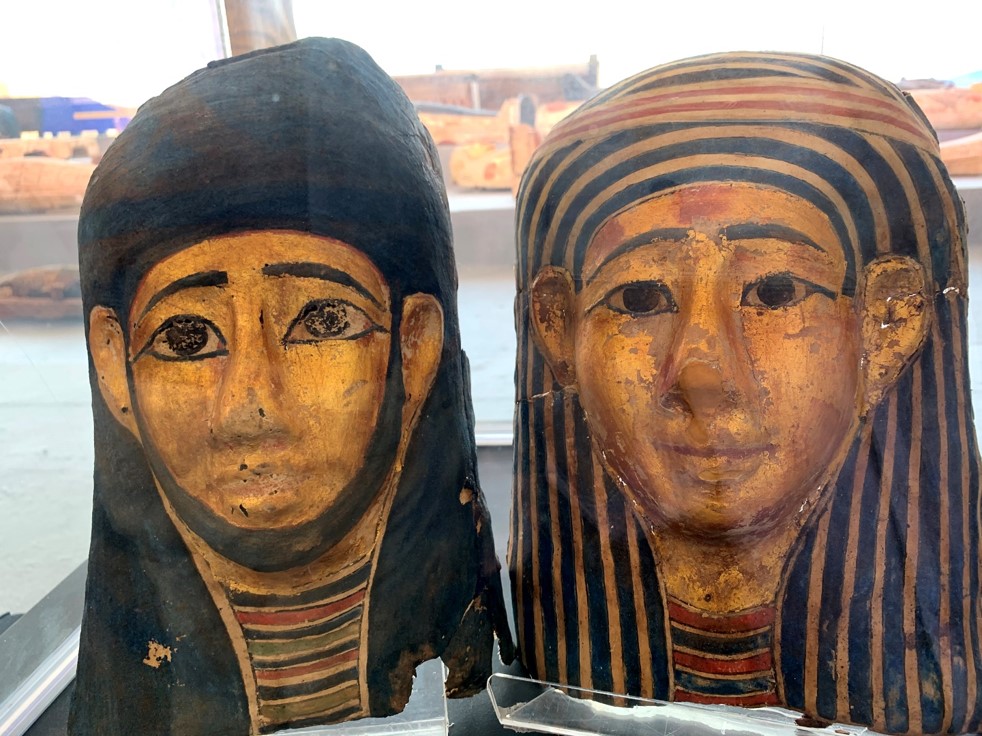 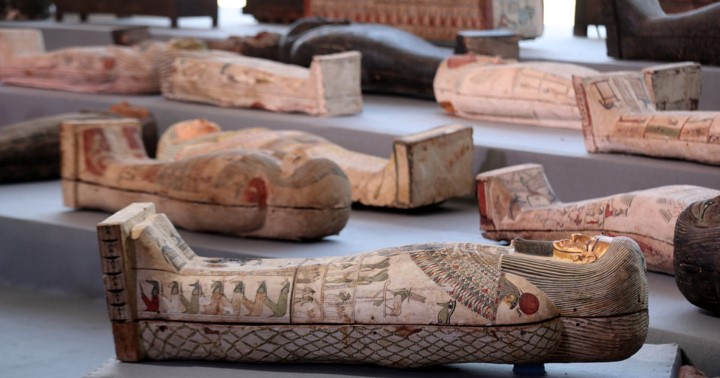 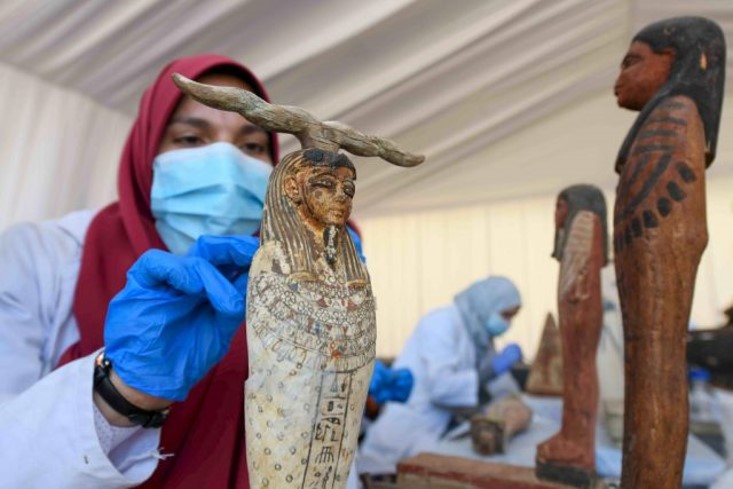 Making Sense of the Saites

What is the Saite dynasty? Who were these people? The Saite dynasty was a period of time when Egypt was ruled by a family of native Egyptian Kings. These kings were appointed by the Assyrians to rule Egypt in 664 BCE, after the Nubian (Sudanese) 25th dynasty had been driven out. (Luckily for the Saites, the conquering Assyrians had matters to deal with at home – and let them just get on with it.) 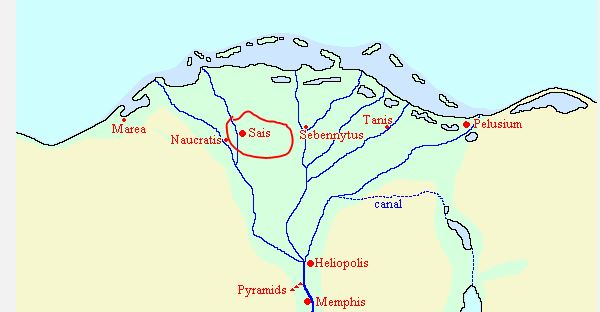 The Saites hailed from an area called “Sais” in the north. They were likely of Libyan extraction – much like the 22nd and 23rd dynasties – north-westerners who sought to revive the long and rich traditions oh Pharaonic Egypt from long ago. They ushered in a new culture drawing on the greatness of stone monuments and statuary of the Old and New Kingdom. To assert their right to rule they associated themselves as closely as possible with the great kings of Egypt’s past. (Sometimes without fully understanding the exact meanings behind the religious texts and ancient customs).

Prior to 2020, Egyptologists had no proof of where these Saites – the kings, priests and nobility of 6th century BCE- had established their primary burial ground. Saqqara – and specifically in the area near Unas – now makes sense for many reasons.

Dr. Ramadan Hussein of the University of Tübingen led the excavation of the great burial shaft found in 2022. In a wonderful lecture given on January 26. The Archaeology of Mummification: A Saite-Persian Mummification Complex at Saqqara

In it, Dr. Hussein reveals key findings of his Saite excavation near the pyramid of Unas including:

1) The Saite tombs were located in a communal burial shaft underneath a large mummification workshop.

“The whole complex could be looked upon as a funeral home of sorts… providing mummification along with burial compartments and equipment,” says Ramadan Hussein

3) The 6 tombs containing 59 mummies were communal — with some bodies, (like that of a child), literally crammed in the corner, while others enjoyed more “private suites” for family members 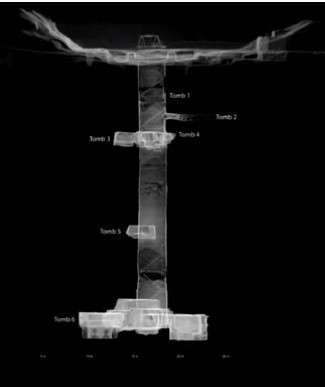 What can we learn from all of this? Cetainly, during the Saite dynasty, there was a complex administration around funerals – and the workshops and burials were all interconnected. Also, the deep deep shafts in the earth of these tombs were no doubt an attempt to be all the closer to the great Osiris, lord of the netherworld, with the power to grant them an afterlife.

Most importantly, for the Saites and later period Egyptians, it was not so much the size and grandeur of your tomb, but where you were buried.

Nowhere was more illustrious for your afterlife house than Saqqara – the great necropolis of Old Kingdom Egypt. Like Rosedale in Toronto, Knightsbridge in London – or Beverly Hills in LA.

To be in the prestigious vicinity of fearsome King Unas – the first to build a pyramid containing religious texts was prestigious indeed. Even better, to have your tomb chamber intersect with the labyrinthine passages of ancient king Nynetjer… wow. The combination would surely safeguard your soul… and guarantee you a fine afterlife!

The same can be said of the New Kingdom mummy cache found this past January, crowded around Teti and his Queen Naert’s respective pyramids.

Whatever the burial choices of these newly discovered ancients, one thing certainly is true:
Hundreds of mummies, coffins, sarcophagi and statuary will now yield up precious secrets to Egyptologists… and amply fill all the new museums opening through Egypt.

As Zahi Hawass says about the January find:

“All these discoveries will rewrite the history of Saqqara and the 18th dynasty”.

I would humbly add: they will shine a light on the mysterious “Saites” as well… as they explode our understanding of the lives and deaths of all ancient Egyptians. 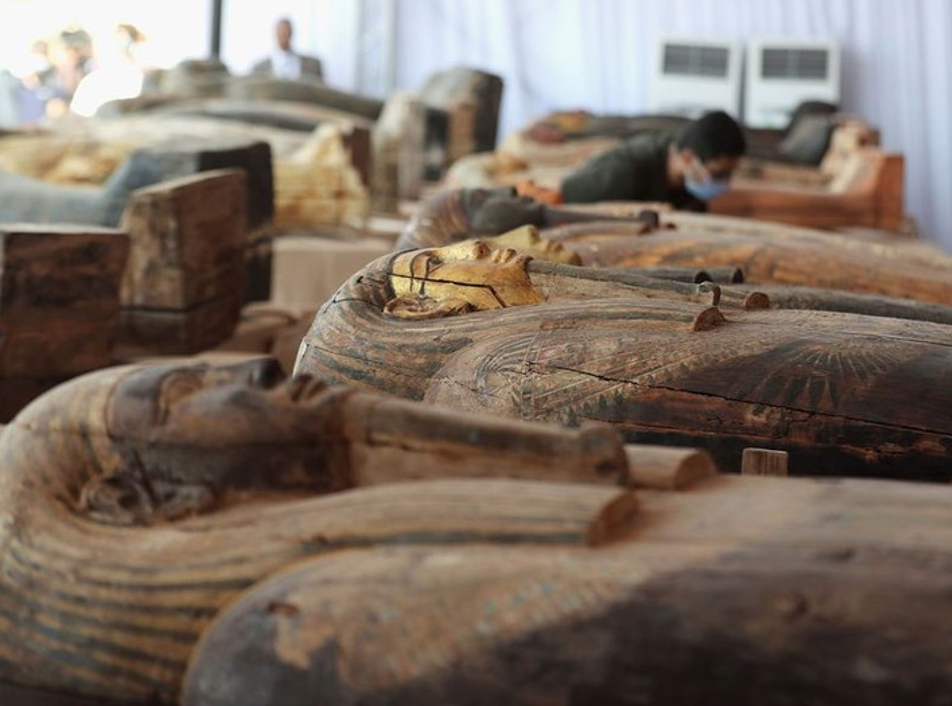