A priest’s spectacular golden mask. A temple singer with three stunning, ornate nested coffins. A roman baby who was given a lavish burial. At the British Mummies show opening this week at the Royal Ontario Museum, CT scans reveal surprising facts about the lives and deaths of six ancient Egyptians… 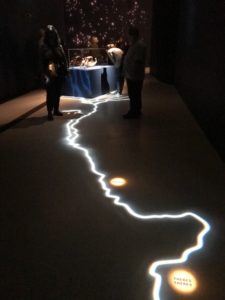 The ROM is coming to life again – thanks to some long-dead visitors. And even, if we have to keep our masks on for a while longer, it’s nice to know that six ancient mummies from Egypt (via jolly old England) are ‘digitally’ unwrapped and on display to be enjoyed. They’re here, along with their stunning coffins and select masterpieces of Egyptian funerary arts spanning 3000 years of history as part of Egyptian Mummies: Ancient Lives, New Discoveries. 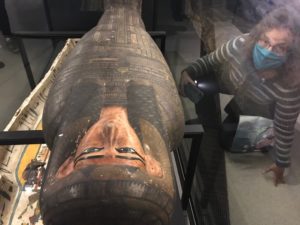 We were lucky to be among the first to see the preview Friday September 18. The show officially opened to the public Saturday September 19, and runs until March 21. 2021.The exhibit is an exploration ofsix unique Egyptians (not kings or queens) through their mummies, coffins, and ancient funerary objects. This traveling British Museum show first launched in 2014 with eight mummies in all– including a pre-dynastic man and a Christian era lady. Hmmm…maybe they had to reduce mummy numbers for social distancing?

Come to the ROM to meet these fine ancient Egyptians: 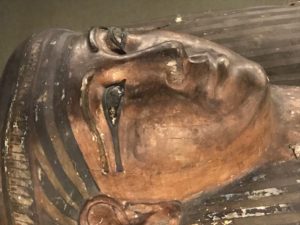 Tamut, 22nd Dynasty (900 BCE): A middle-aged temple singer at Amun’s Karnak temple during a troubled time in Egypt’s history when the Amun priesthood was strong. She was daughter of a priest who (like many of these mummies) died between ages 35 and 49 years. CT scans reveal: plaque in her arteries and dental lesions. Most memorable feature: amulets with magical powers 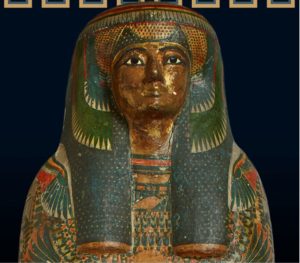 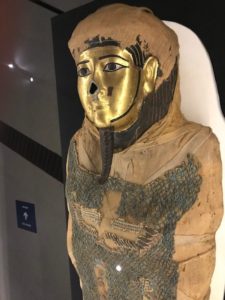 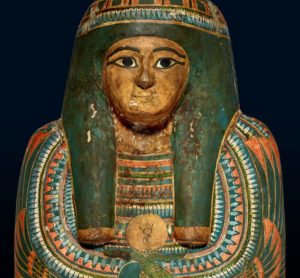 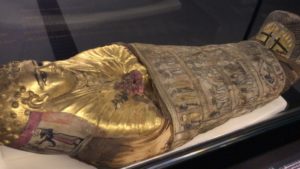 6. Young man, Roman period (140-180 CE): This teenager died between 17 and 20 years. CT scans reveal he was a tad overweight, although his mummy painting shows a pleasant slender face. Most remarkable feature: That wonderful Roman period mummy portrait on his panel, burial style of the day. 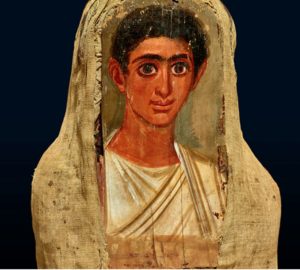 What makes this exhibition a must-see?

This is not merely a gruesome parade of human remains. The tasteful and respectful exhibit winds you gradually through six spacious rooms — each for a different individual –  allowing visitors a close encounter with so many masterpieces and fascinating curiosities.  You get a rare window not just into their deaths – but their vibrant lives and religious beliefs. From senet boards, amulets and jewelry to beautifully carved stele, statuary, toys and even articles of clothing, it’s a well-rounded encounter with surprisingly relatable objects from antiquity. 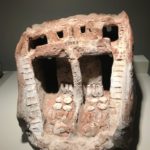 A soul house — where the spirit resides after death 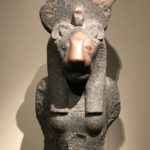 A wonderful statue of Sekhmet, who wards off diseases, keeping COVID at bay! 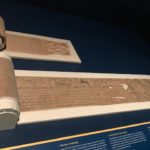 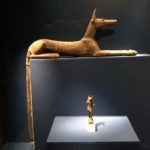 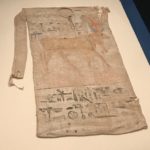 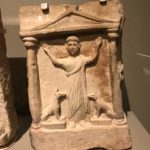 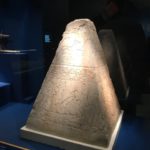 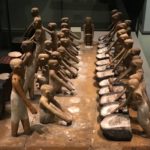 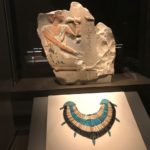 We’ve come a long way from “Victorian mummy unwrapping parties”. Over recent decades, we’ve learned to penetrate the secrets of the mummies, digitally and non-invasively. Physical objects share the stage with artful multimedia displays that unravel the mummies before your eyes. It all serves to present the story of mummification in a dynamic, detailed and captivating way. See the bare mummy revealed — and precious amulets come to life — still shrouded within the ancient mummy linens! 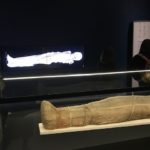 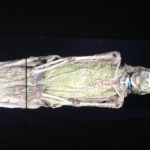 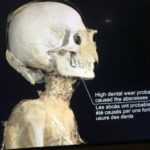 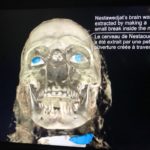 In Late Period Egypt (which is the main focus of the show) the finest craftsmen of the day had turned their talents from tomb painting to coffin decoration. For this reason, many of the coffins here represent the most spectacular examples of coffin art in all of Egypt’s history. It is rare treat to gaze upon wonders like the gilded funerary mask of Irthorru – and the absolutely gorgeous nested coffins of lady Nestawedjat, with vibrant colours beautifully preserved. 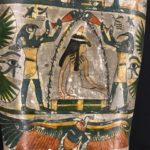 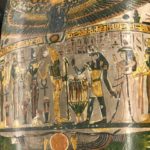 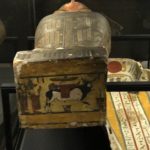 What could have been better?

Older mummies… and a nod to ROM’s own Egyptians.

Be aware, all of the mummies and their respective coffins in this show are from the late and Roman period of Egypt. Don’t expect to see any older mummies from the famous Old, Middle or even New Kingdom periods of Egypt.

It would have been great to see at least one mummy or coffin from an earlier era. The current collection does suffer a bit from repetition: lots of middle-aged singing ladies from the late period with severe dental problems. Be sure to tell your dentist friends to get their tickets – they will eat it up!

It also might have been nice to see artist renderings of what these six individuals may have really looked like. They can do that these days, and often create them for mummies.

No reference to ROM’s own amazing mummies– or its pioneering history in Egyptian mummy CT scanning. 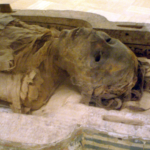 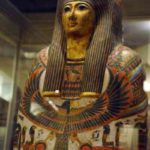 What really surprised me was this:  There was no video, text — or even a simple display to cross reference and tell the story of ROM’s own exceptional mummies. Understandably, the ROM collection itself could never be “merged” into this special British Museum exhibit (legalities, rules etc.). However, I would have expected a head nod, a simple word or two, connecting the collections. After all, another temple singer of a similar era to these visiting ladies, lies just a few floors above. “Djetmaatesankh”, in fact,  was the recipient of the world’s first CT scan back in 1978 at Sick Kids hospital. Yes, the ROM was actually the first museum in the world to attempt the non-invasive CT scan technology on mummies over 40 years ago. In fact, the lady “Djed” (as she is affectionately known) even received a second scan in 1994. They found conclusively she had died of… (wait for it)… yes, a tooth abscess! 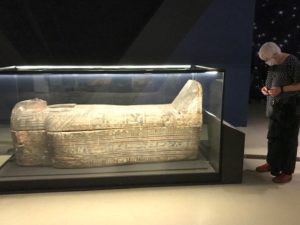 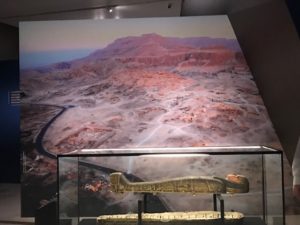 Ah well… Another reason to see the beautifully curated, immersive British Museum Mummies show at the ROM is the opportunity to cap off your tour with a visit upstairs to say hello to the famous Djetmaatesankh. The exhibit will certainly deepen your appreciation for them.

And be sure to say a prayer for bread and beer to “Antjau” as well, the wealthy landowner with red hair, a well-loved ROM mummy. Perhaps, one day really soon, Antjau too may receive that CT scan he so sorely deserves!