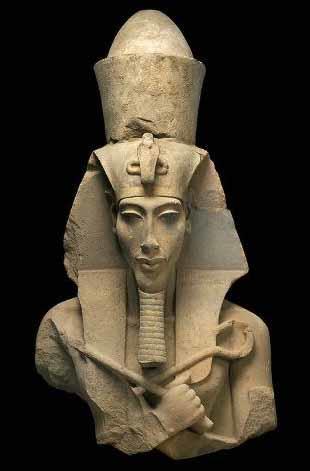 As the world still weeps following the terrible disaster at Notre Dame cathedral in Paris (a place dear to my heart), it occurs to me how lucky we are that the Egyptians built so many great works in stone and mudbrick. That said, who is to say what wondrous wood creations from antiquity have been lost through fire? More than we know, I am certain. One great work that was lost –not through fire but through dismantling by man — was Akhenaten’s Great Temple of Aten, a strange roofless cathedral of built during a bizarre period of Egypt’s history. 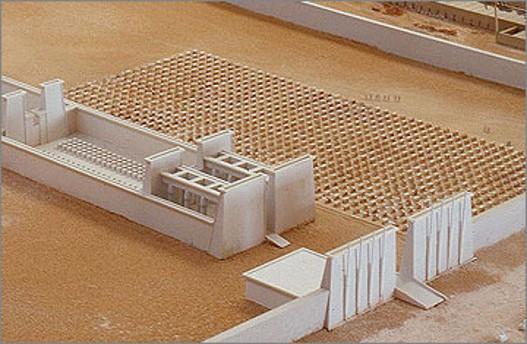 As history’s first monotheist (more accurately ‘henotheist’, as he allowed minor household gods) the heretic king Akhenaten has been called the inspiration for Moses. As such, what an interesting figure to consider during this season of Easter and Passover. Freud actually called Akhenaten “the first idealist” while his contemporaries called him “The criminal”. People either love him or hate him. Akhenaten elevated the status of the Sun god “Aten” to be the ‘one god’ of Egypt — worshipped strictly through him. He briefly changed the entire religion, capital, art and culture of the country, so no surprise his rule of 17 years ends mysteriously — and his ‘cathedral’ to the Aten was ruthlessly destroyed, along with his “sun city” by successive kings to obliterate his memory. His son was the famous boy king Tut – who under the strong arm of elder advisors, restored Egypt to traditional ways.

Excavating at the first pylon – a dream come true 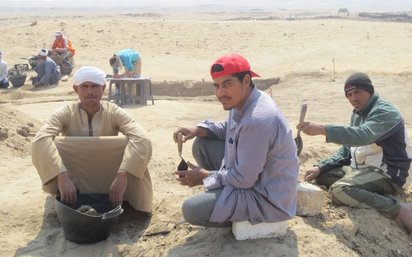 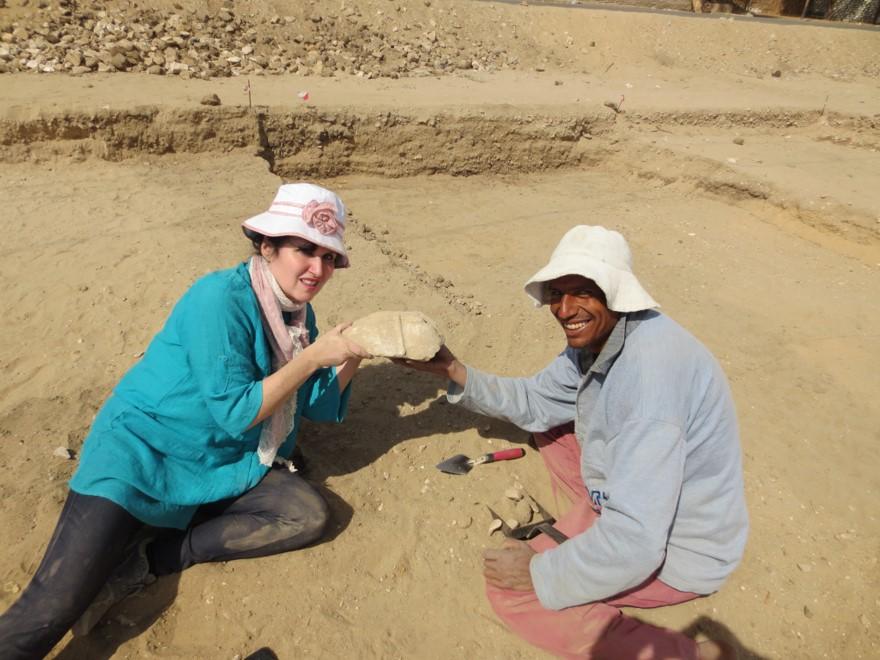 On my very first trip to the Egyptian Museum in Cairo, Akhenaten’s elongated and strange but alluring appearance in colossal statues mesmerized me – I was under his spell and thunderstruck with a passion for ancient Egypt and the Amarna age. Fast forward to 2013 when I had the honour of working aside the legendary Barry Kemp CBE, the director of the Amarna project for a few weeks – in the initial stages of the re-excavation and rebuild of his Great Aten Temple. It was a dream come true. I fondly remember breathlessly sifting sand in the spoil heap in front of the first pylon searching for lost treasures in the early light of morning—being careful to not damage the fragile mud brick. Eating ‘second breakfasts’ of foole sandwiches and hot black tea in a pitched tent. Learning snippets of Arabic from the friendly, brown-teethed workmen – like the word for spade, bucket and brush (‘for-sha’)… and dreamy evenings watching pink skies fade to black as the Aten sank in the west; those sunset G&Ts on the roof of the 100 year-old dig house in Middle Egypt with the small convivial team of archaeologists.

The Amarna Project is about to start its 6th season at the Great Aten Temple, with excellent progress already made on preserving the original mud brick floors and rebuilding many pylons, ramps and columns. I just received exciting news on the excavation – personally from the archaeologists Anna Hodgkinson and Miriam Bertram… including some thrilling updates on an opportunity for people to have their name etched for eternity at the rebuilt temple…

A place to satiate a hungry god – and feed the common people? 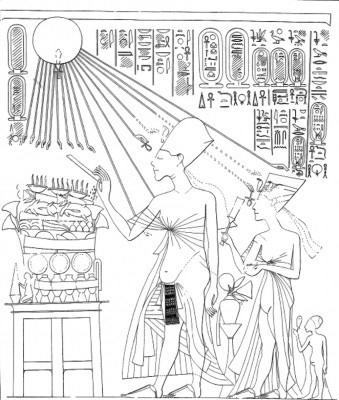 The Great Aten Temple is unlike any other temple in Egypt, for countless reasons, too many to mention here. First it is largely roofless, which makes sense: the god worshipped here is the actual sun above, so no need for a dark shrine to conceal a golden statue. Another striking feature is the staggering number of offering tables within and outside the main temple where fresh food was piled up for morning and evening rituals. Close to 2000 at current count. One can only imagine the enormous slaughter of animals required to provision these tables– and the dreadful stench of meat left to rot all day under the hot sun. We surmise (and hope) that once ‘the Aten’ symbolically feasted on the victuals, the people of Amarna flocked to the court to partake of the food themselves. Another curious feature is a grouping of rectangular basins in the court (I actually got to assist a little in clearing them in 2013). Based on their length and shape (along with other factors), Barry Kemp suggests they may have been used for laying out human bodies. Could people have actually brought their dead relatives into the temple grounds to join them in rituals — and a good meal? Ewww! When it comes to Akhenaten, there is an abundance of strangeness to ignite debate, fascination and occasional disgust. 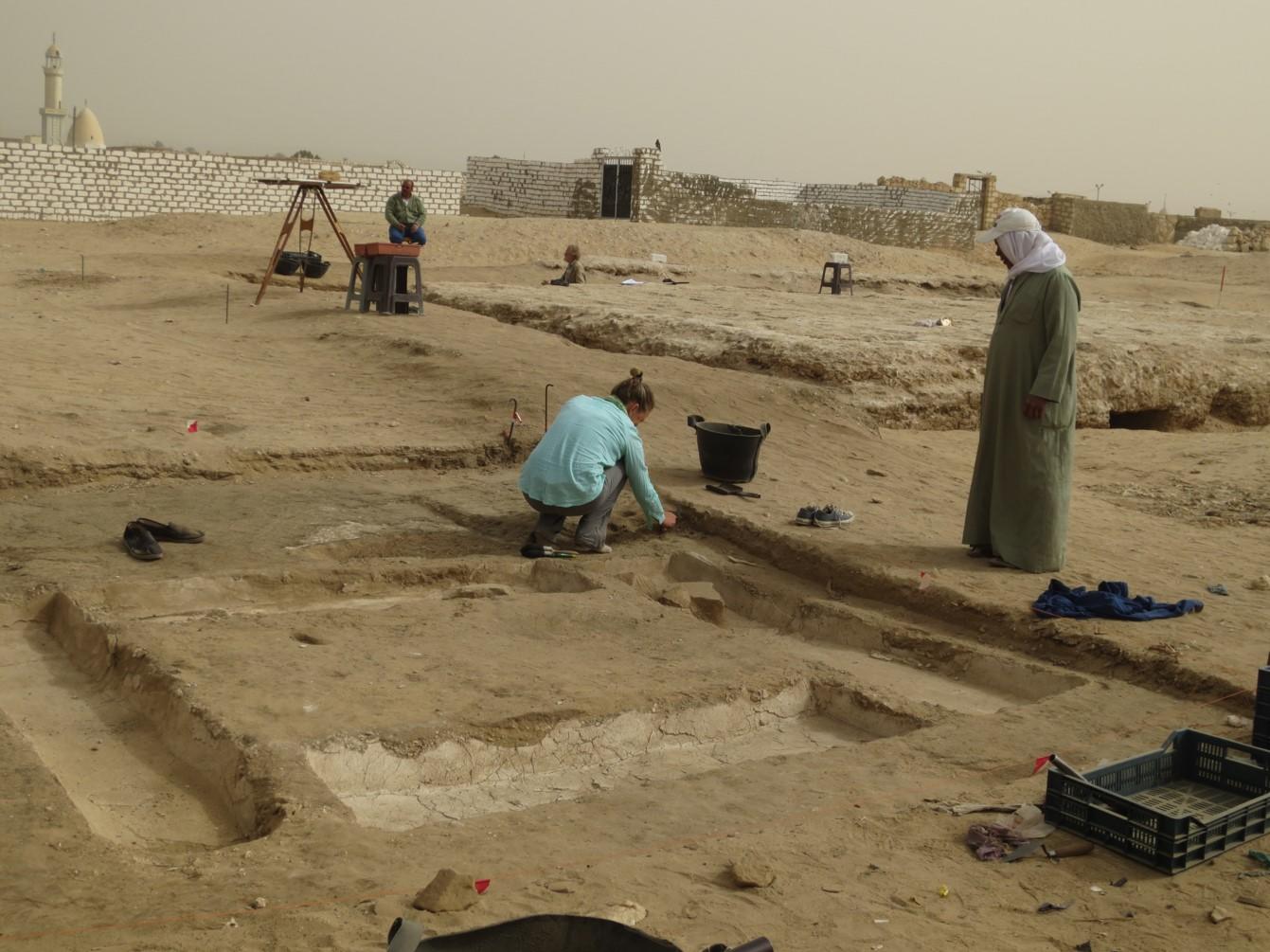 “As soon as we are back at work, we will continue to remove the spoil heaps to the south of the main temple building to see if there are any structures, says Miriam Bertram, a lead archaeologist on the project. “Then, we’ll remove more rubble in the front of the temple. “In the past, it revealed very interesting material, like a big fragment of a statue of Nefertiti and a gypsum head of Akhenaten – and huge amounts of pot sherds and stamped mud jar sealings that I am working on right now. We’re also reconstructing a ramp that led to a big platform in between the first stone pylons”

To define the temple boundaries and protect it from encroachment from the nearby village, the Amarna team is also marking the main outlines of the temple in new limestone blocks. This project has sparked a creative and what I think is a brilliant fundraising campaign. For a nominal donation – as little as 5 euros – you can have your name inscribed on one of those Tura limestone blocks – to be part of the Great Aten Temple in perpetuity! Your funds will be used to support the Amarna project in all its efforts to partially rebuild and preserve this important temple. Sound like a great cause and opportunity? Buy one block for 5 Euros and help us reconstruct the Great Aten Temple! Visit the fundraising site now.

Akhenaten’s Great Aten Temple and his sun city have no equal in Egypt – nor in any ancient civilization. His is one of the most remarkable stories in Egyptian history. I would add too that the archaeology being conducted at this rare urban site – a site occupied just once for a period of only 12 years – is one of the most significant and detailed excavations underway in Egypt. Learn more about the Amarna Project and Great Aten Temple here. 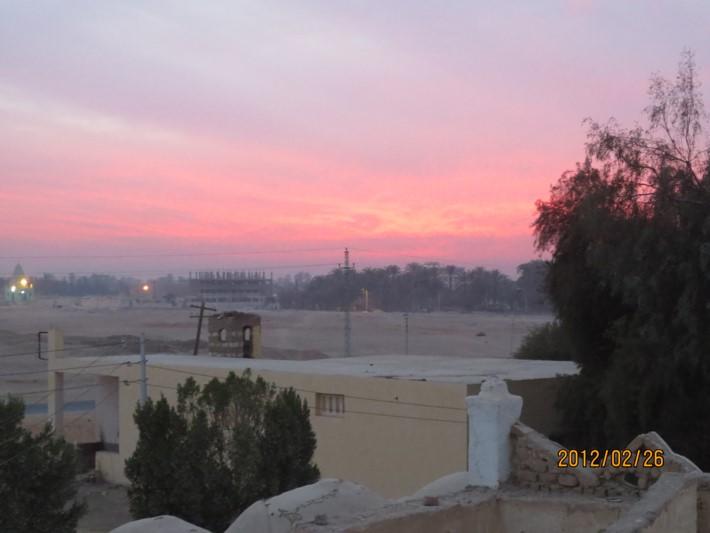